ATLANTA - Georgia’s coronavirus infections are soaring above their worst peaks of the summer, pushing more people into hospitals and resulting in more deaths.

In July, the state wasn’t reporting suspected infections because few rapid antigen tests were being administered. But state Public Health Commissioner Kathleen Toomey has said Georgia treats both categories as an infection of the COVID-19 respiratory disease, as advised by the Centers for Disease Control and Prevention.

The 7-day average of infections has gone up 25% in the past two weeks. And the share of molecular PCR tests coming back positive has risen to nearly 12% in Georgia, the worst since early August and a number that suggests there are many more undetected cases in the population. 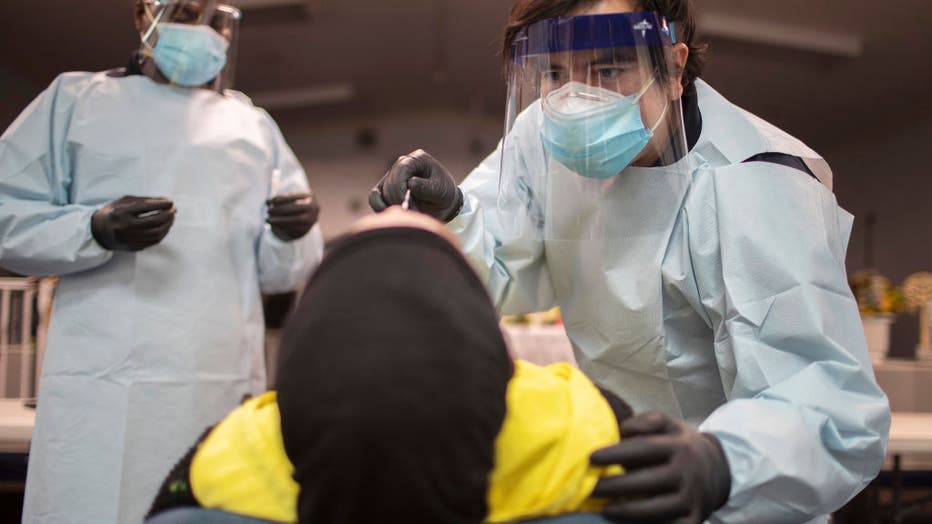 Health care workers use a nasal swab to test a person for COVID-19 at a pop up testing site. (Joe Raedle/Getty Images)

“It’s the fall surge we have been expecting around the country,” Dr. Jeffrey Stephens, director of infection prevention for the Medical Center Navicent Health in Macon, told WMAZ-TV.

Not everyone shows symptoms, and most people recover, but a small fraction sicken and die. Hospitalizations have not yet reached their summer heights in Georgia, but beds are filling rapidly with COVID-19 cases. Nearly 2,400 COVID-19 patients were in the hospital Friday, up 32% in the last two weeks.

Hospital executives have said the typical COVID-19 case is less severe now than in earlier months, but that patients with other medical needs are sicker than normal and pushing capacity limits. Statewide, 85% of intensive care beds were filled on Friday, with 11 hospitals statewide saying their intensive care units were full according to the Georgia Coordinating Center, which works to direct patients to hospitals.

“The scary things we see in the hospital data today don’t include the anticipated surge that’s expected as a consequence of Thanksgiving gatherings,” wrote Amber Schmidtke, an epidemiologist who writes a daily report on Georgia’s epidemic. “Next week will most likely be worse as well as the weeks to follow.”

Schmidtke called on the government to step in with short-term interventions to try to hold down infections, to prevent hospitals from becoming overloaded.

“If we push our healthcare infrastructure to the point of breaking, we will see a lot of people die who could have been saved under normal circumstances — for all sorts of conditions, not just COVID-19,” Schmidtke wrote.

Deaths, which usually come after infections and hospitalization, are also rising. Georgia has now recorded 9,725 confirmed and suspected deaths, and at a current average of nearly 50 deaths a day, could cross the 10,000-death mark sometime next week.