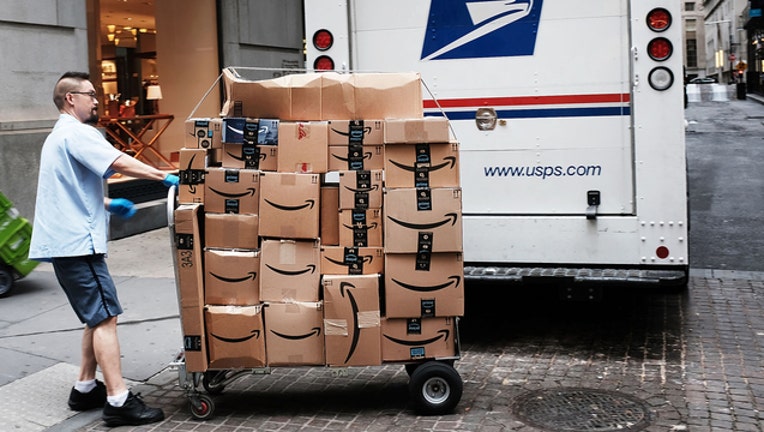 A US Postal worker delivers Amazon boxes outside of the New York Stock Exchange (NYSE) on October 11, 2018 in New York City. (Photo by Spencer Platt/Getty Images)

(AP) - The explosion in online shopping has led to porch pirates and stoop surfers swiping holiday packages from unsuspecting residents. The cops in one New Jersey city are trying to catch the thieves with some trickery of their own.

Police in Jersey City, across the Hudson River from New York, are teaming up with Amazon to install doorbell cameras and plant dummy boxes with GPS tracking devices at homes around the city.

They didn't have to wait long Tuesday for someone to take the bait.

"We had a box out on the street for three minutes before it was taken," said police Capt. James Crecco, who is overseeing the mission. "We thought it was a mistake at first."

The suspect was caught, Crecco added.

Exact figures on porch thefts are hard to come by. A company commissioned by comparison-shopping service insuranceQuotes.com surveyed 1,000 people and extrapolated that 26 million Americans have had a holiday package stolen from their home. That would be nearly one in 12 Americans.

Amazon — which is providing equipment free for the Jersey City program — declined to provide figures on how many packages are reported stolen or missing, as did UPS and FedEx.

"We absolutely report them to local law enforcement when we hear of them, and we encourage our customers to do the same," UPS spokesman Glenn Zaccara said.

Jersey City Police Chief Michael Kelly told The Associated Press that locations for cameras and boxes were selected using the city's own crime statistics and mapping of theft locations provided by Amazon.

"Most of the package thefts we've made arrests on revolve around (closed-circuit TV) or private surveillance cameras that give us a still image," Kelly said. "With the bait packages, some will be under video surveillance, and some will have GPS."

No homeowner is immune. Crecco said his mother was a victim of a package theft. So was Mayor Steven Fulop, according to his spokeswoman.

Members of the police department who live in the city volunteered to have the cameras and boxes placed at their homes.

Kelly said the program has undergone a legal review and has been approved by a municipal prosecutor. He said the city is hoping to expand the program with assistance from Amazon, the nation's largest online retailer.

Amazon declined to answer questions about the anti-theft program but said in a statement, "We appreciate the increased effort by local law enforcement to tackle package theft and remain committed to assisting however we can."

Similar programs have been tried in other cities including Albuquerque, New Mexico, and Hayward, California.

E-commerce sales have been growing faster than sales at brick-and-mortar retailers for several years. Online sales in the U.S. are forecast to increase 14.8 percent from last year, to $124.1 billion, for November and December, according to Adobe Analytics, which tracks online spending.

The Postal Service expects to deliver about 900 million packages, and United Parcel Service forecasts it will handle about 800 million parcels between Thanksgiving and Christmas.

That is causing a spike in deliveries to houses and apartments. Sometimes the residents aren't home or aren't aware that a package has been dropped off.

The delivery companies provide services that could offer some protection against porch thefts. The boldest might be Amazon's Key service, in which homeowners pay to have a cloud-connected lock and camera installed at the front door, allowing an Amazon delivery person to unlock the door and slide the package inside.

Plenty of people went on social media to raise privacy and security objections after Amazon announced that service, but the company is betting that others will decide it's convenient.

Some other strategies for foiling snatch-and-run thieves require picking up packages at a company store, which defeats the purpose of at-home delivery.

To avoid parcels being left outside during extended absences, the post office has long allowed customers to set up hold-mail requests.

UPS and FedEx let customers sign up for alerts about deliveries and give them the chance to reschedule or change the drop-off address even for deliveries already on their way. They let customers leave detailed instructions for drivers about where around the house to leave a package.

The delivery companies will also let customers pick up packages at other businesses. FedEx, for example, uses some Albertsons and Kroger grocery stores and Walgreens drugstores.

— Have packages delivered to a workplace or a friend who is home during the day.

— Ask if a signature can be required for the package to be dropped off, particularly if it's an expensive item.

— Doorbell cameras, some for $100 or less, let residents keep an eye on their porch, which might not stop a thief but perhaps give police video evidence to help catch the culprit.

— There are services that use a locked storage box bolted to the customer's porch; delivery drivers can unlock them by entering a code on a keypad.

This story has been corrected to show that the Postal Service is expecting to deliver about 900 million packages, not 900.