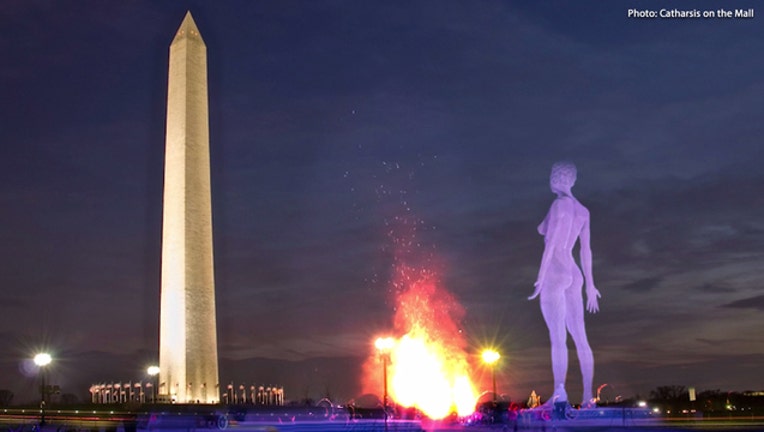 Catharsis on the Mall said it is planning to have a 45-foot-tall nude statue of a woman at the Washington Mall for months.

WASHINGTON - The organizers of Catharsis on the Mall are planning to have a 45-foot-tall statue of a naked woman near the Washington Monument for several months.

The National Park Services confirmed to FOX 5 it received and was reviewing a public gathering permit application for Catharsis on the Mall which would include erecting a 45-foot tall statue of a naked woman.

Organizers for the event said the statue, called “R-Evolution,” is “a woman standing in her strength and power… expressing her humanity; how she feels when she is safe, when she can just be.”

It was created by artist Marco Cochrane in collaboration with model Deja Solis and was first featured at Burning Man, an annual festival held in the Black Rock Desert in Nevada, back in 2015, according to organizers.

Catharsis on the Mall said it would like to have the statue next to the Washington Monument looking at the White House beginning Nov. 9 and lasting through March 2018.

Organizers were seeking to raise $90,000 in donations and “vigil keepers,” which are people needed to stand watch around the statue 24 hours a day. Catharsis on the Mall said it would only be permitted to have the statue as long as someone is with it 24 hours a day, but National Parks Services did not confirm that information with FOX 5.

“As with all First Amendment activities, our review is to ensure public safety and that park resources and values are protected; we do not take into consideration content of the message presented,” National Parks Services told FOX 5.

Catharsis on the Mall is an annual vigil held in D.C. that aims to raise awareness about the Equal Rights Amendment.