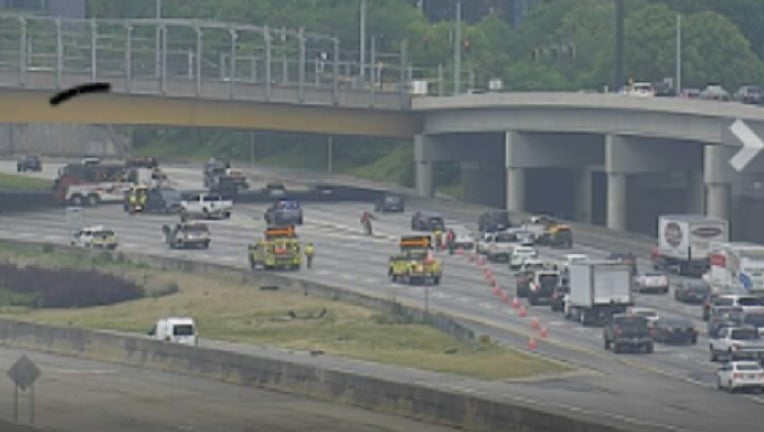 GSP troopers say an SUV cut off a pickup truck hauling a camper trailer, causing both to overturn on I-75/85 at 17th Street in Atlanta on April 29, 2021. (Georgia Department of Transportation)

ATLANTA - A driver has been charged with improper lane change after a camper trailer jackknifed and overturned on the Downtown Connector on Thursday afternoon.

It happened around 1:24 p.m. in the northbound lanes of I-75/85 at the 17th Street overpass. Georgia State Patrol troopers said the driver of a Volkswagen SUV improperly made a lane change and struck a pickup truck hauling a camper trailer. That trailer overturned, blocking the I-85 northbound lanes.

The Volkswagen SUV also overturned, troopers said, ended up against the median wall, striking two other vehicles in the process.

The driver and a passenger in the SUV suffered minor injuries and were taken to Atlanta Medical Center for treatment.

The road was closed for about an hour while crews worked to clear the wreck.

The name of the driver charged has not been released.