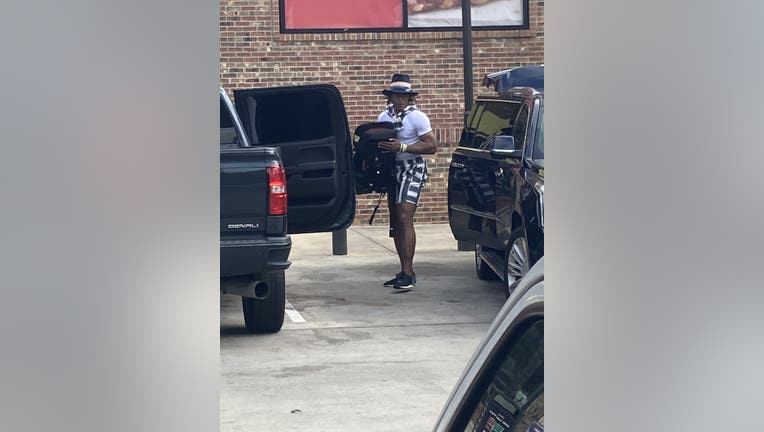 Cam Newton outside a Coweta County gas station in June. How this photo went viral -- and miscaptioned -- can be a lesson on the best way to protect your pictures. (Photo by Jason Castles)

NEWNAN, Ga. - If a picture really is worth a thousand words, a Newnan couple wants to hear just two of them out loud: "I’m sorry."

Two photos they say they took of NFL quarterback Cam Newton went viral without their permission and with some major mistakes.

Their experience underscores how photos you post on social media can be abused, and what you have to do in order to stop it.

Ashley Nelson and her boyfriend Jason Castles said they had pulled in for gas Sunday morning June 28 at the RaceTrac in Newnan.

The real story behind the Cam Newton photo that went viral and the person who took it.

While Jason sat in the passenger seat waiting for Ashley to come back, he says he spotted former Auburn and Carolina Panther quarterback Cam Newton pull into a parking spot and get out.

“The hat kind of caught my attention when he got out of the car so I knew that’s who it had to be,” said Castles.

Newton has family in the Coweta County area. 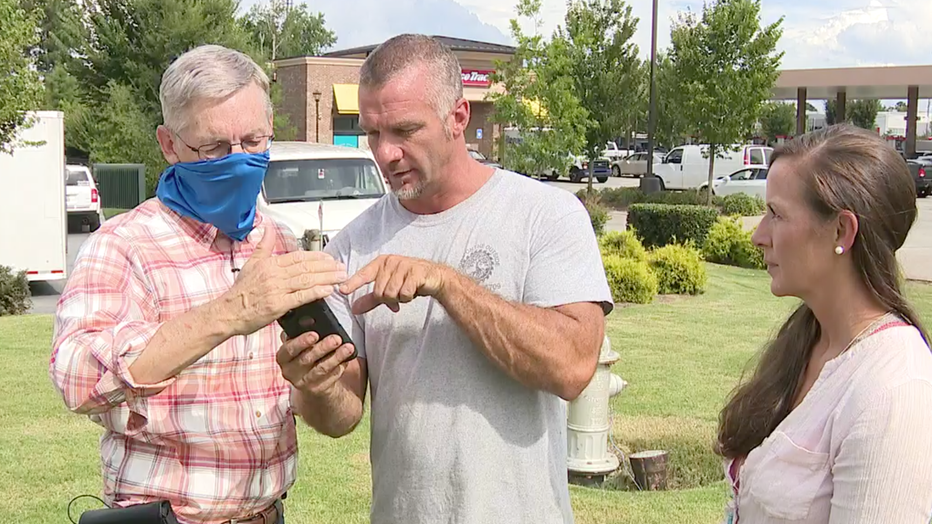 Jason Castles and Ashley Nelson still can't believe how their fun pictures of Cam Newton got so misused.

Castles said he took his iPhone and snapped two photos of Newton. He had the live video feature enabled. When he showed the photos to the FOX 5 I-Team, we saw the short burst of video that accompanies the photo on the camera roll. The embedded date was June 28.

Newton drove away. The couple never approached him.

Castles uploaded the two pictures to his Facebook page that same day writing “This man. Cam I Am.”

We should tell you Castles is a Bulldog and Falcons fan. Not many Auburn fans on his friends list.

Despite the lack of buzz on his page, the next week those two pictures somehow appeared on a Patriots fan page with a completely different narrative:

“Cam Newton has arrived in Foxborough, Massachusetts just 2 half hours ago before he makes the official contract signing to be a member of the New England Patriots,” the caption read.

A Twitter user named Boston Sports Mike also posted the pictures on July 3, again announcing Cam Newton had arrived in Foxborough. He got nearly 4000 retweets and more than 12,000 likes.

“Everyone was saying the pictures were taken in Foxborough,” remarked Castles. “I was like no, they were actually taken on Bullsboro.”

The RaceTrac is on Bullsboro Drive in Newnan. 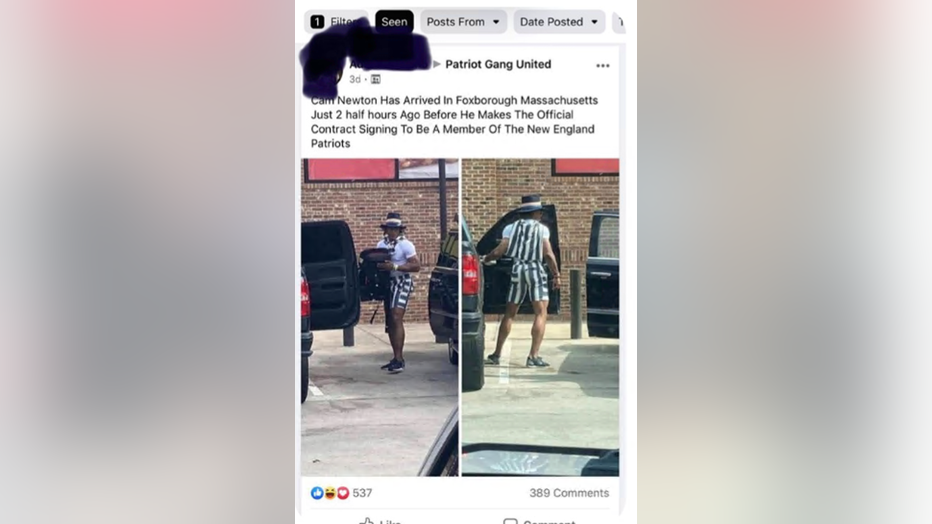 Some Patriots fans even suggested this was their new QB coming out of a pizza joint near the Pats stadium. Nope. It was a gas station in Newnan.

“It kind of goes back to how easy something that you post can be viral in hours and you not even really have any knowledge of it,” Castles said.

The photos wound up on other sites, too. The NFL History Channel on YouTube. A fashion website. Another Patriots fan site reported they were pretty sure the picture showed Cam coming out of a pizza joint close to the stadium.

ESPN even aired the photos, the network giving a photo credit to that Boston Sports Mike twitter user and another man Jason and Ashley say they’ve never heard of.

For the Newnan couple, one a teacher and the other a tree surgeon who rarely dabble in the world of social media, the experience was eye-opening.

“The whole hot thing now is fake news, that you would completely make up a story and share it without fact-checking it at all,” Nelson complained. “We just want accountability.”

They reached out to as many of the sites as possible, but say they got no direct response.

“Money was not what we’re after,” said Nelson. “We were letting them know you just can’t take someone’s stuff and use somebody’s stuff without their permission.” 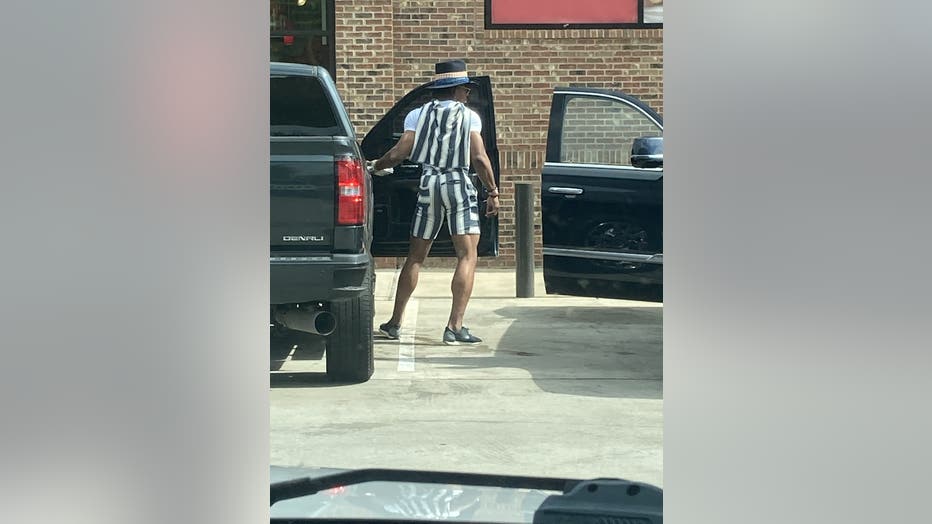 How can you protect a picture you post online? There are some simple ways. (Photo by Jason Castles)

“In theory, whoever took the picture and copied it would be (in trouble),” said Tim Holbrook, vice provost at Emory Law. “But it would be really difficult to bring a lawsuit.”

According to Holbrook, most of the time the legal costs just aren’t worth it.

“You have an ownership right just by the creation of the work,” pointed out Nicole Morris, who was also the former managing patent counsel at Coca-Cola. “But in order to enforce that right, (you) must register with the copyright office.”

It’s simple to do online, but how many of us would even take that step? Both attorneys also suggested a watermark on any photos you don’t want stolen.

Holbrook had another idea.

“If it’s something you think is highly valuable, don’t post it on social media,” he said. “That would be the best advice because it’s simply too easy to copy.”

Journalists are allowed to air publicly-posted photos without permission if it’s clear they’re a key part of the story. It’s called Fair Use.

But this Newnan couple said you’ve still got to get the story right.

“Fortunately, it’s a harmless story,” said Nelson. “But that was the big thing. You’re just lying. You took something that’s not yours without asking and then you created a lie and promoted it for your own benefit.”

As NFL camp begins, Boston Sports Mike still had that erroneous tweet and those two Cam Newton pictures… pinned to the top of his page.