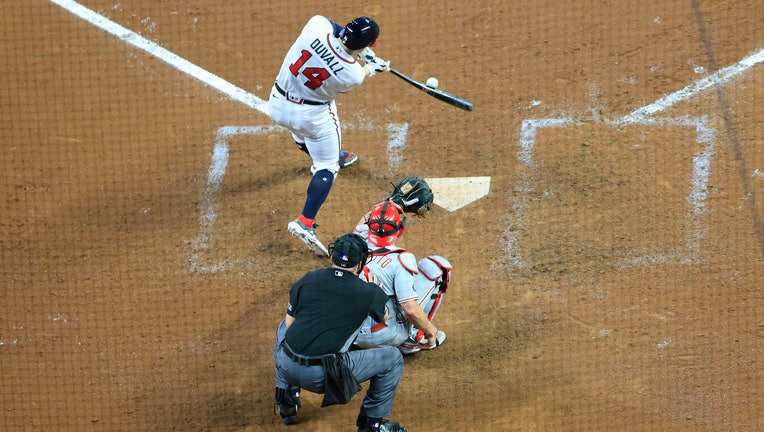 Adam Duvall #14 of the Atlanta Braves bats during the Tuesday evening MLB game between the Philadelphia Phillies and the Atlanta Braves on September 28, 2021 at Truist Park in Atlanta, Georgia. (Photo by David J. Griffin/Icon Sportswire via Getty Ima

Atlanta reduced its magic number to three games in the division race and extended its lead to 3 1/2 games over the second-place Phillies, who no longer control their fate with five games left. The loss eliminated Philadelphia from contention for an NL wild card.

Will Smith survived a wild ninth inning, allowing an unearned run, for his 36th save in 42 chances.

Smith walked Bryce Harper leading off and Guillermo Heredia, inserted in the game for his defense in the inning, chased down J.T. Realmuto’s liner to center. Pinch-hitter Matt Vierling’s liner to left field glanced off the glove of Edwin Rosario for a two-base error, putting runners on second and third.

Andrew McCutchen loaded the bases, Didi Gregorius had a sacrifice fly and, with runners at the corners, Smith fell behind Freddy Galvis 3-0. Smith evened the count, Galvis fouled off two pitches and then swung past a fastball.

Morton (14-6) gave up singles to his first two batters and gave up only one more hit. He allowed only three hits with 10 strikeouts and two walks in seven innings.

Zack Wheeler (14-10) was almost as impressive, allowing two runs and four hits with seven strikeouts in seven innings. The Phillies were 4-0 in Wheeler’s first four September starts. The right-hander was 3-0 with a 1.14 ERA in those starts.

Wheeler faltered in the third inning. Travis d’Arnaud led off with a double to the left-field corner and moved to third on Dansby Swanson’s single up the middle. Morton’s two-strike sacrifice moved Swanson to second before Soler’s sharp single to left drove in both runners.

Héctor Neris stranded two runners in the eighth. Galvis misplayed Soler’s grounder at third base for an error before Neris walked Freddie Freeman, who was forced on Ozzie Albies’ grounder. Neris struck out Austin Riley to end the inning.

Phillies RHP Connor Brogdon (strained right groin) was activated from the 10-day injured list. Brogdon adds depth to the bullpen as RHP Sam Coonrod (thumb infection) has not pitched since Sept. 22. ... The team recalled INF Alec Brohm from Triple-A Lehigh Valley and optioned RHP Ramón Rosso and IF Luke Williams to Lehigh Valley. Manager Joe Girardi said Brohm, who hit only .245 with 16 errors in 111 games with Philadelphia before his demotion, will serve as a pinch-hitter and bench depth.