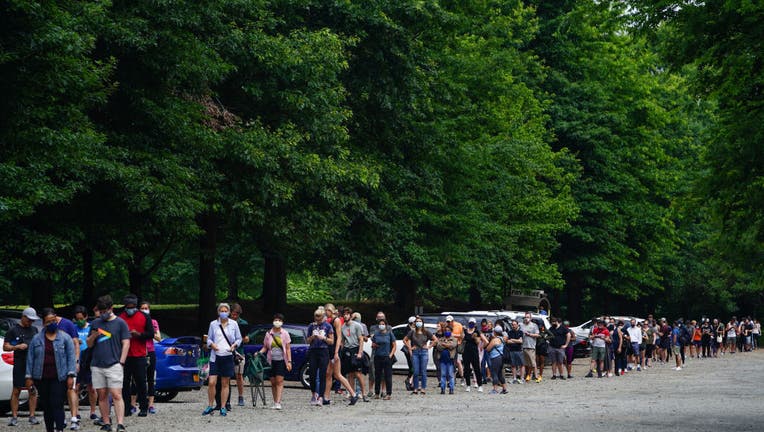 Rachana Desai Martin, the national director for voter protection and senior counsel of the Biden campaign, said in a statement that Georgia's electoral primary was "completely unacceptable."

"Free and fair elections are the cornerstone of our democracy. What we see in Georgia today, from significant issues with voting machines to breakdowns in the delivery of ballots to voters who requested to vote absentee, are a threat to those values and completely unacceptable," Martin said.

Georgia's polls were staffed by fewer workers because of concerns about the coronavirus. A reduced workforce contributed to officials consolidating polling places, which disproportionately affected neighborhoods with high concentrations of people of color. Long lines were also reported in whiter suburban areas.

FOX 5 Political Analyst Lori Geary breaks down the concerns over both absentee and in-person voting and the investigations each will likely spark.

Some voters said they requested mail-in ballots that never arrived, forcing them to go to polling places and adding to the lines. Turnout, meanwhile, may be higher than expected as voters said they were determined to vote following the police killing of George Floyd in Minneapolis and the ensuing demonstrations that swept cities including Atlanta.

There was also trouble with Georgia’s new voting system that combines touchscreens with scanned paper ballots.

The developments were troubling heading into the fall presidential campaign, which will attract even more voters. President Donald Trump and Democrat Joe Biden are expected to fiercely compete in this rapidly changing state. That leaves officials, who have already been criticized for attempting to suppress the vote, with less than five months to turn things around.

"We only have a few months left until voters around the nation head to the polls again, and efforts should begin immediately to ensure that every Georgian -- and every American -- is able to safely exercise their right to vote," Martin said.

The state’s chief elections officer, Republican Secretary of State Brad Raffensperger, announced plans to investigate voting problems that plagued Fulton and Dekalb counties, where roughly half the population is black.

"Obviously, the first time a new voting system is used there is going to be a learning curve, and voting in a pandemic only increased these difficulties. But every other county faced these same issues and were significantly better prepared to respond so that voters had every opportunity to vote," Raffensperger said in a statement.

In response, DeKalb County CEO Michael Thurmond issued a statement that blasted the secretary of state.

“The Election Day issues relating to the use of state-purchased voting machines represent an attack on the democratic process.  The Secretary of State’s office has alleged these issues resulted from a failure of county leadership. If there was a failure of leadership, it starts where the buck should stop, at the top. The eradication of any ‘learning curve’ rests squarely at the feet of the Georgia Secretary of State Brad Raffensperger and his office." Thurmond said.

Gov. Brian Kemp was largely silent about the voting problems on Tuesday, aside from retweeting a message from his wife urging people to vote.

Metro Atlanta voters run into several problems at the polls on Primary Election Day including long lines, a lack of paper ballots, and issues with the state's new voting machines.

Georgia hasn’t voted for a Democratic presidential candidate since 1992, but the state is being closely watched by President Donald Trump and Biden. The former vice president, in particular, hopes to emerge as the prime beneficiary of energy from the African American community and its white allies, who have held massive protests for more than a week.

His path to the presidency was already focused on maximizing black turnout and expanding his alliance with white suburbanites and city dwellers, young voters, Asian Americans and Latinos. Trump, meanwhile, hoped to demonstrate strength among his base of white voters in small towns while holding his own in metro areas.

Trump, meanwhile, has virtually no path to reelection without victory in Georgia.