How Biden plans to distribute free COVID-19 at home tests

The White House on Wednesday announced plans to increase COVID-19 testing in schools in an effort to keep them physically open as the country faces an omicron-fueled surge of infections.

The Biden administration said it will send 5 million rapid tests and 5 million lab-based PCR tests to K-12 schools each month, with the first shipments being delivered in late January. This is on top of the more than $10 billion devoted to school-based tests authorized in the $1.9 trillion COVID-19 relief package and about $130 billion earmarked in that law to keep kids in the classroom.

The additional rapid tests are intended to help support screening testing and "test to stay" programs, in which schools use regular rapid testing to keep students, teachers and staff who come in close contact with those who test positive in the classroom, according to a White House statement.

The administration said it is increasing lab capacity to support the additional PCR tests per month for schools to perform individual and pooled testing in classrooms.

"Students have sacrificed so much over the course of the pandemic, and the President has been clear in his words and his actions that his Administration will do all that it can to keep schools safely open for all students," the White House statement reads. 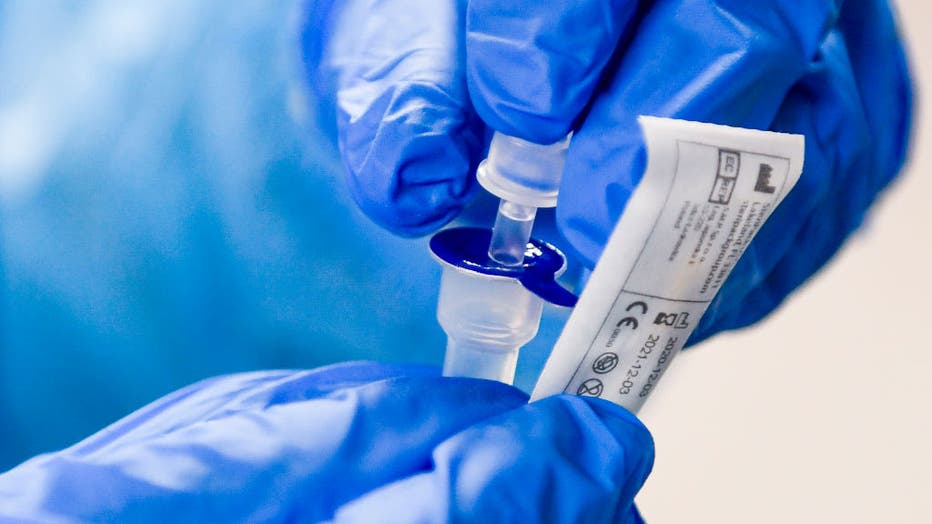 FILE - A school nurse holds one of the testing vials used for COVID-19 testing at Brandywine Heights Middle School on Nov. 12, 2021, in Topton, Pennsylvania. (Photo by Ben Hasty/MediaNews Group/Reading Eagle via Getty Images)

The U.S. is also deploying federal "surge testing sites" to be located on or near school grounds. The White House said it aims to further support schools with these sites by establishing specific hours for students, their families and school staff and by dedicating a specific portion of daily testing to school communities.

The new initiative for schools comes as the White House faces mounting criticism over long lines and supply shortages for testing. Despite Biden’s effort to keep schools open for full-time, in-person instruction, some major school districts have temporarily switched to online learning.

The nation's third-largest public school system, in Chicago, closed for five days after a battle between teachers and officials over COVID-19 safety protocols as the city sees a tidal wave of cases.

"We have been very clear, publicly and privately, that we want to see schools open, that the president fought for additional assistance in the American Rescue Plan — $130 billion, including $5 billion that went to Illinois, $10 billion that went to testing across the country — to ensure we were prepared and had resources needed to address whatever may come up in the pandemic," White House Press Secretary Jen Psaki told reporters on Monday when asked about Chicago Public Schools.

Covid cases across the country are on the rise and because of the surge many teachers are worried about returning to the classroom. Fox's Garrett Tenney breaks down Chicago Teachers Union's request for remote learning.

The new crop of tests is enough to cover only a small fraction of the more than 50 million students and educators in the nation's schools. The administration hopes the tests will fill critical shortfalls in schools that are having difficulty securing tests through existing federal funding or are facing outbreaks of the more transmissible COVID-19 variant.

Meanwhile, the White House is also finalizing plans to ship millions of more free COVID-19 tests to Americans and awarded its first contracts as part of this pledge. People will use a new website to order their tests, which will then be sent to them by the U.S. Postal Service. Administration officials have said the first batch of tests would be shipping in January.