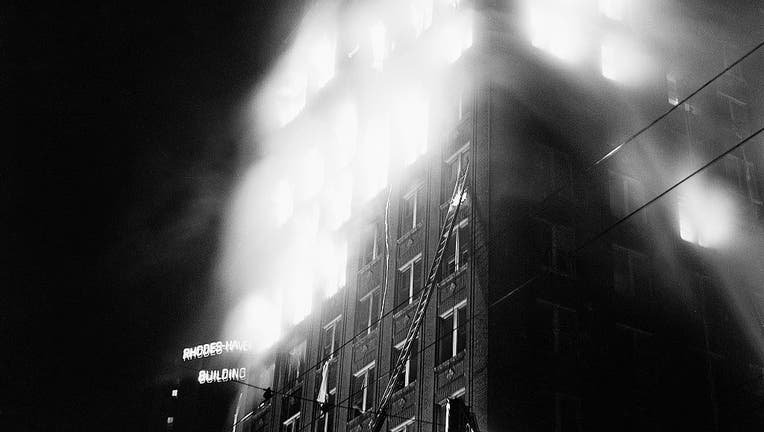 Searing flames burst from the windows of the Winecoff Hotel at the height of the fire that gutted the building, causing the deaths of over 100 persons and injury to at least 100 others. Occupants of the rooms in the 15 story structure were forced to

ATLANTA - Tuesday marks 75 years since a fire started at Atlanta's Winecoff Hotel, which is the deadliest hotel fire in U.S. history.

The hotel, which was on Peachtree Street in Downtown Atlanta, was advertised as "absolutely fireproof" and had a single staircase serving all 15 floors.

When the fire started, all the hotel's occupants above the third floor were trapped. The survivors either were rescued from upper-story windows or jumped into nets held by firemen.

In total, the blaze killed 119 people and led to new and lasting fire safety standards for hotels and other public buildings. It came near the end of a dreadful year for hotel fires. Months earlier, 61 people were killed in a Chicago hotel fire and 19 others perished in a hotel blaze in Dubuque, Iowa. 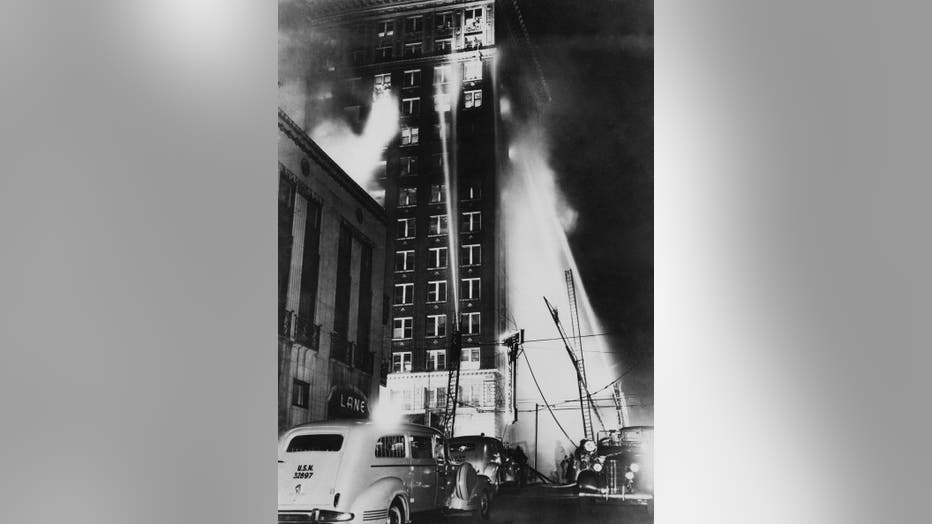 Richard Hamil, who was 9-years-old when he was trapped in the blaze, told the Associated Press in 2016 that he was blinded by the thick smoke and stumbled through the "absolute chaos" into a female guest's room.

"She was preparing to jump, but Daddy told her, ’No, not until we have to, we won’t do that," he said.

Hamil had been at the Winecoff because he was tagging along with his father, an adviser to students who’d traveled to Atlanta for a mock legislative program at the state Capitol. Thirty of the youths perished in the blaze,

The Winecoff fire led to new building codes requiring multiple fire exits. Self-closing "fire doors" also came about after the fire, which fed on air that was released when guests opened doors and transoms.

Hamil and his father managed to escape only because their top floor was nearly on a level with the Mortgage Guarantee Building next door. A custodian from that building placed a ladder across the alley to rescue him. 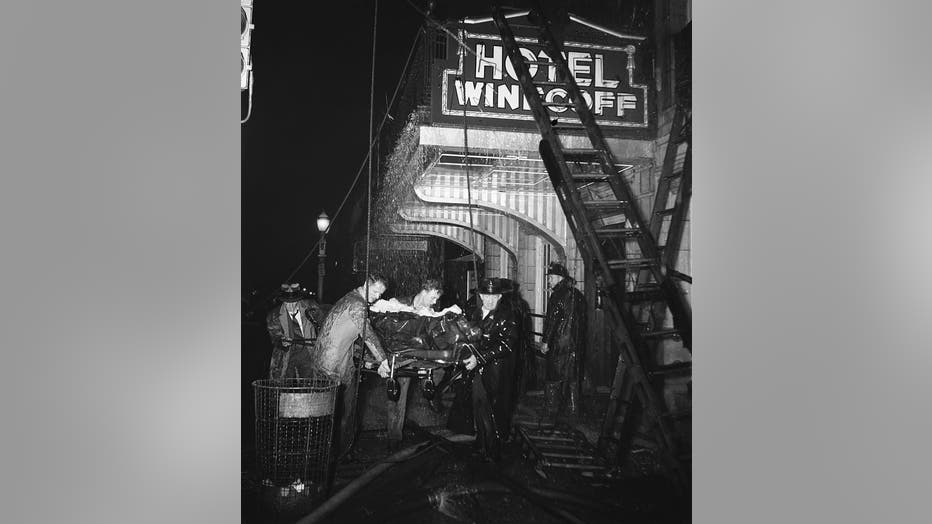 Volunteer rescue workers carry a victim from the Winecoff Hotel in Atlanta, during the fire that destroyed the 15-story building Dec. 7th. (Getty Images)

"I heard somebody say ‘grab the ladder,’ and I thought it was coming from the ground, but it wasn’t. It was coming from straight across," Hamil said. "There were only three people on our floor who survived — my dad, myself and this lady from Mississippi. The rest of the people perished on that floor."

The Winecoff, built in 1913, remained standing after the fire but eventually became vacant and stayed that way for years. It underwent a multimillion dollar makeover a decade ago and reopened in 2007 as the Ellis Hotel.