Grady says surge is worst they have seen

Grady Health System's top officials say this surge is worse with the increase in patients and a growing staffing shortage.

ATLANTA - Just over 5,000 patients were hospitalized with COVID-19 in Georgia on Tuesday, and inpatient beds in the metro Atlanta area were 94% full.

"This morning, we had 70 patients in the emergency room, who had been admitted and were waiting for beds," Dr. Jansen says. "We had no beds available this morning. We were at 106% occupancy."

"Some of them will wait 24 hours, as long as 24 hours, sometimes longer, for a bed upstairs," he says. '"We try, obviously, to move people as quickly as we can."

Statewide, about 87% of ICU beds and 70% of emergency department beds are full, according to the Georgia Department of Public Health.

In Grady's previous COVID-19 peak back in August and September with the delta variant, Dr. Jansen says, the hospital had about 165 COVID-19 patients.

About a week and a half ago, he says, they were up to 285 patients with the virus.

"This is, without a doubt, the worst that we've had it," Jansen says.

Many of the current COVID-19 are considered "incidental" cases, meaning the patients were admitted because of another medical problem and then tested positive for the coronavirus while they were in the hospital. 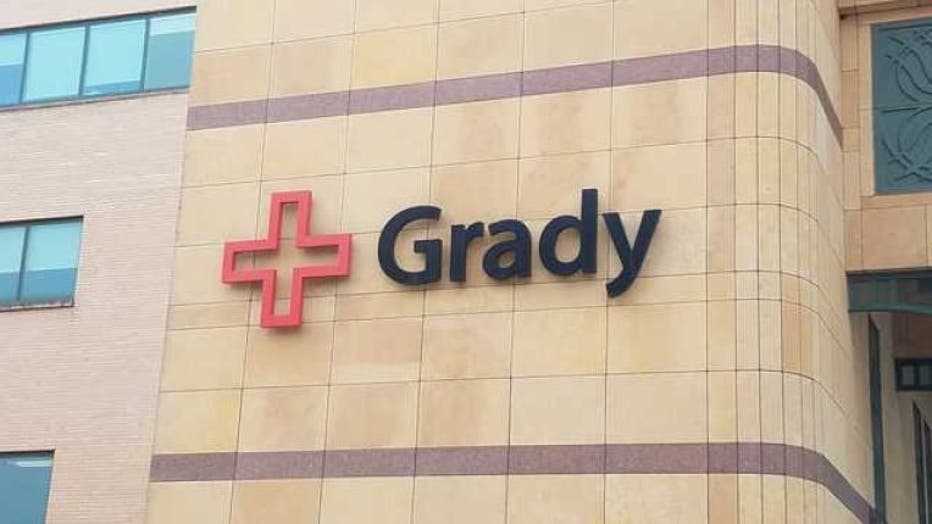 Georgia Emergency Management Agency (GEMA) announced North Carolina is sending a mobile hospital to Atlanta for Grady Hospital to use temporarily while the hospital tries to put its facility back together following a major water leak.  (fox 5 )

Jansen says COVID-19 patients tend to have longer hospital stays and require a higher level of care than patients who do not have the virus.

For that reason, he says, describing their infections as "incidental," misses the point.

"It really isn't as simple as they came in, and they just happen to have COVID," Jansen says.  "They're sick, or they wouldn't be in the hospital.  When we see someone in the emergency room who just has COVID, we send them home."

Patients who test positive for the virus have to be medically isolated and staff members must wear personal protective equipment or PPE whenever they interact with them.

"We have to do the same precautions, the same type of care, the same potential complications, and the same treatments, frequently," Jansen says.  "So, we still have to treat the COVID-19 infection as well as their underlying disease."

The pandemic has exacerbated an ongoing nursing shortage, he says, and many nurses are opting for higher-paying travel nursing jobs.

And, he says, a significant number of staff have been infected with the virus.

"Fortunately, our staff is vaccinated," Jansen says.  "So, they're not as ill, which is a good thing.  But, they're still out for 5 days to sometimes a little bit longer, and that makes it worse."

Dr. Jansen says they are seeing some hopeful signs in this fifth surge.

Fewer of the COVID-19 patients are requiring critical care, he says, and new admissions are slowing down a bit.

"Some of the patients who've been here now for a few weeks are beginning to go home," Dr. Jansen says.  "So, there is hope, there is a little bit of relief is sight."