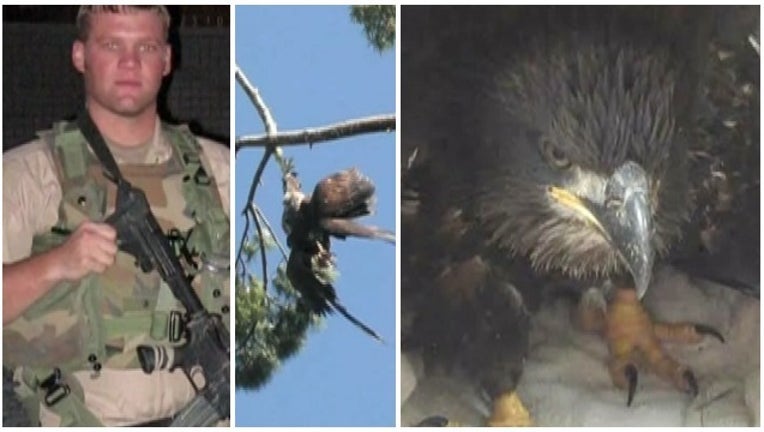 An Army veteran in Minnesota rescued a bald eagle trapped in a tree.

Jason Galvin and his wife Jackie were driving down a local road in Rush County last week when they spotted an eagle hanging upside down from a tree branch. The bird's leg was caught in a piece of rope wrapped around the branch.

"I thought it was dead at the time. I took a closer look with binoculars and saw that the head was moving. And I knew it was very much alive," Galvin said.

Fearing it would die, the couple called police, the fire department and the state's Department of Natural Resources for help. However, everyone said it could be a liability issue attempting a rescue.

"Unfortunately, it wasn't in their jurisdiction and the safety measures," Mrs. Galvin said.

That's when Galvin, an Army veteran with two tours in Afghanistan, decided to step in.

Galvin got permission from the state's DNR and then grabbed a 22 long rifle. He used his own eagle eye to shoot at the tree branch and rope.

"It was weird shooting in the direction of a bald eagle," Galvin said. "I was very nervous. I didn't want to hit that bird."

His persistence paid off and the eagle came free more than an hour later.

A neighbor and a conservation officer were on hand during the rescue mission.