An Atlanta mayoral candidate is claiming dirty politics in a recent ad that would appear to give them darker skin.

ATLANTA - There is a skin color controversy in the race to be Atlanta's next mayor.

That may sound illogical given that both contenders are indisputably Black candidates.

The simmering dispute between Andre Dickens and Felicia Moore centers around Dickens' claim that a group of Moore supporters "darkened" photos of Dickens to make his skin color look darker.

The association Dickens is concerned about is that a more ebony shade might be undesirable, or even threatening to some voters. Dickens labeled the purported altering of a campaign photo "racist" 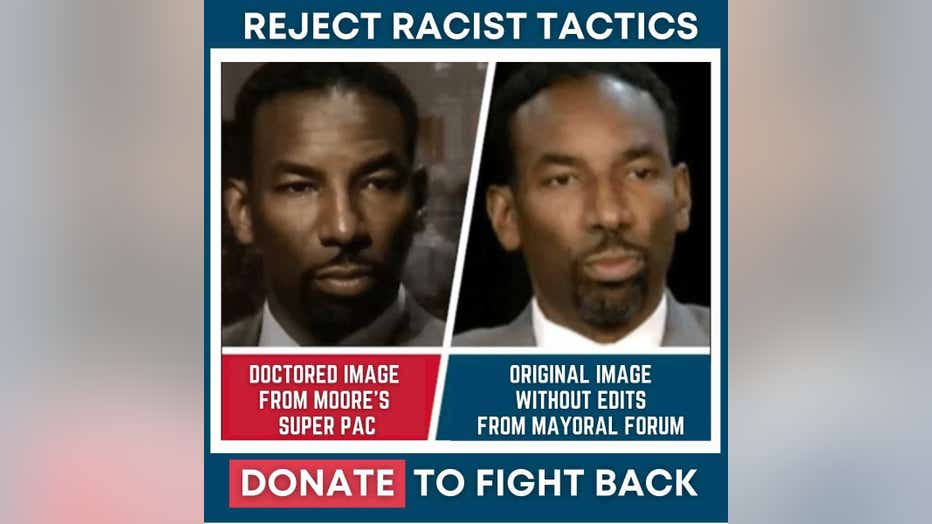 An ad from the Andre Dickens campaign showing the alleged "darkening" of his skin tone by a Felicia Moore super PAC.

"What is disingenuous," Moore said, "is that he is fundraising off this".

Moore said that "as a Black woman" she would never be involved in something like this. Plus, Moore contends that a Dickens flyer regarding the purported altered photograph shows two different images of the candidate.

Michael Bond, a light-skinned political leader, said it is a "stain" on the mayor's race that skin color is being debated. But the topic has come up often.

For more than 40 years, the Black mayors - Maynard Jackson, Andrew Young, Bill Campbell, and Shirley Franklin - were all light-skinned.

Former Mayor Kasim Reed broke that pattern if you can call it such.

Wednesday is the final day of early voting in the election.