The Alameda County Board of Supervisors has agreed to pay $5 million to the family of a 20-year-old Fremont man who hanged himself after being chained to a Santa Rita Jail door in violation of policy - one of the largest wrongful death payouts in county history. Cristina Rendon reports

FREMONT, Calif. - The Alameda County Board of Supervisors has agreed to pay $5 million to the family of a 20-year-old Fremont man who hanged himself after being chained to a Santa Rita Jail door in violation of policy - one of the largest wrongful death payouts in county history since 2015.

They have been grieving since Madrigal died last June after they called 911 to get him mental help after he experienced some sort of psychotic break after experimented with mushrooms about two weeks prior.

"It doesn't bring any relief," Jaime told KTVU on Wednesday. "We still want people to be accountable for Christian. Fremont failed us. Santa Rita failed us."

Madrigal's civil rights attorney, Adante Pointer, noted it's the largest settlement payout in Alameda County since 2015, when the county paid $5.5 million to Stanislav Petrov, a suspect who was brutally beaten by sheriff’s deputies, Luis Santamaria and Paul Wieber, who were both fired and charged with felony assault with a deadly weapon. Since that time, the county has paid out $27.5 million to settle excessive force and wrongful death suits, according to a tally KTVU compiled through a Public Records Request.

"This is a significant amount, and it shows the complete lack of compassion and egregious behavior," Pointer said. "But the thing that is so dissatisfying is that there is still no direct accountability. Many of those involved are still on the job and may do this to someone else's child."

A spokesman for the sheriff's office said the department had no comment. Pointer was notified Wednesday that the settlement had been approved. 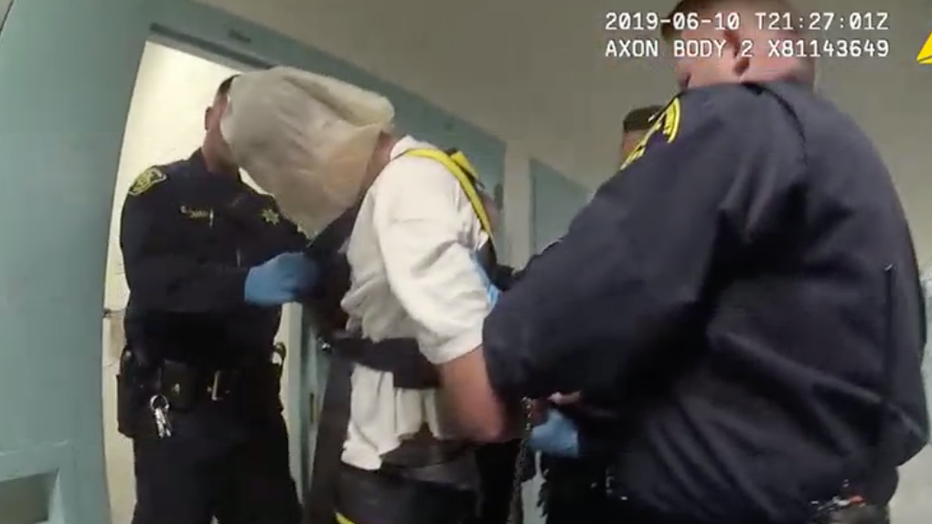 The money stems from what happened last summer when Madrigal was acting erratically and even aggressively two weeks after he tried mushrooms with his brother, police reports indicate.

Instead of taking him to a hospital or psych unit, Fremont police ended up arresting Madrigal, putting him in a WRAP and taking him to Santa Rita Jail, where a lieutenant ordered him to be chained to a door, in violation of policy. Madrigal was left chained to the door for hours, and when deputies returned to check on him, he had hanged himself with the chains they provided him.

Eleven months later, the Sheriff's Office moved to fire Lt. Craig Cedergren in July, who resigned four days before he was formally fired.  Cedergren was the supervisor who ordered the his staff to chain Madrigal to the door with chains, and while police reports show his deputies disagreed, no one spoke up to challenge the decision.

In addition, body camera video that was made public about a year after Madrigal's death showed that the young man was not acting aggressively as sheriff's deputies had claimed, although he may have tensed his body a bit as he was being taken out of the WRAP and cuffed with leg irons to the jail door.

Alameda County District Attorney Nancy O'Malley did not find cause to criminally charge Cedergren. And none of the other half dozen or so other deputies were disciplined or faced any consequences.

Jaime said he and his wife don't really even want the money and they have been in denial since the settlement was reached. He did say he'd like to contribute at least some of it to the nurses who helped his son at the hospital before he died.