An attorney for the Arbery family and activist Al Sharpton were in the courtroom for the fourth day of the trial. An investigator read transcripts of conversations with Greg McMichael.

BRUNSWICK, Ga. - One of the three white men standing trial for the death of Ahmaud Arbery said they had the 25-year-old Black man "trapped like a rat" before he was fatally shot, a police investigator testified Wednesday.

Father and son Greg and Travis McMichael armed themselves and chased Arbery in a pickup truck after they spotted him running in their coastal Georgia neighborhood on Feb. 23, 2020. A neighbor, William "Roddie" Bryan, joined the pursuit in his own truck and took cellphone video of Travis McMichael shooting Arbery three times at close range with a shotgun.

More than two months passed before the three men were arrested on charges of murder and other crimes, after the graphic video leaked online and deepened a national reckoning over racial injustice.

For the first time during the Ahmaud Arbery murder trial the state called witnesses that lived in the Satilla Shores community during the time of the shooting.

Glynn County police Sgt. Roderic Nohilly told the jury Wednesday he spoke with Greg McMichael at police headquarters a few hours after the shooting. He said Greg McMichael, 65, told him Arbery "wasn’t out for no Sunday jog. He was getting the hell out of there."

The father told Nohilly he recognized Arbery because he had been recorded by security cameras a few times inside a neighboring home under construction. Greg McMichael said they gave chase to try to stop Arbery from escaping the subdivision.

"He was trapped like a rat," Greg McMichael said, according to a transcript of their recorded interview Nohilly read in court. "I think he was wanting to flee and he realized that something, you know, he was not going to get away."

Defense attorneys say the McMichaels and Bryan were legally justified in chasing and trying to detain Arbery because they reasonably thought he was a burglar. Greg McMichael told police Travis McMichael, 35, fired in self-defense as Arbery attacked with his fists and tried to grab his son’s shotgun.

"He had an opportunity to flee further, you know," Greg McMichael told Nohilly. "We had chased him around the neighborhood a bit, but he wasn’t winded at all. I mean this guy was, he was in good shape."

Prosecutors say the McMichaels and Bryan chased Arbery for five minutes before he was shot in the street after running past the McMichaels’ idling truck. Prosecutor Linda Dunikoski has described him as an "avid runner" who lived about 2 miles (3 kilometers) from the Satilla Shores neighborhood where he was slain.

Bryan, 52, was on his front porch when he saw Arbery run past with the McMichaels’ truck close behind. He told police he didn’t recognize any of them, or know what prompted the chase, but still joined in after calling out: "Y’all got him?"

Bryan said he used his truck several times to cut off Arbery and edge him off the road, testified Stephan Lowrey, the lead Glynn County police investigator on the case. He said police found Arbery’s fingerprints by the truck’s driver-side door, next to a dent in the body. Bryan said Arbery had tried to open the door, but he denied striking the running man.

"I didn’t hit him," Bryan said, according to an interview transcript Lowrey read in court. "Wish I would have. Might have took him out and not get him shot."

Matthew Albenze testified he was splitting logs in his front yard on the day of the shooting when he saw Arbery enter the home under construction across the street. Albenze testified Wednesday that he went inside his house and put a handgun in his pocket before he called police from behind a tree at the curb. Arbery left the house running toward the McMichaels’ home while Albenze was on the phone.

Bryan’s attorney, Kevin Gough, asked the investigator if he thought Bryan committed aggravated assault or any other "serious violent felony" with his truck.

"No, that wasn’t the way I interpreted it at the time," said Lowrey, who agreed that local police considered Bryan a witness to the shooting.

Glynn County police made no arrests in Arbery’s shooting. But Lowrey said he hadn’t closed the case when the Georgia Bureau of Investigation took it over in May.

"It was still open but not getting much traction," Lowrey said. He added: "I think inactive was a fair summary."

The Rev. Al Sharpton spoke with reporters Wednesday outside the Glynn County courthouse, where he held the hands of Arbery’s parents while leading a prayer for justice. Sharpton criticized the disproportionately white makeup of the jury.

Superior Court Judge Timothy Walmsley allowed the jury to be sworn in last week after prosecutors objected, saying several Black potential jurors were excluded because of their race, leaving only one Black juror on the panel of 12. The county where the trial is being held is nearly 27% Black.

"It’s an insult to the intelligence of the American people," Sharpton said. "If you can count to 12 and only get to one that’s Black, you know something’s wrong." 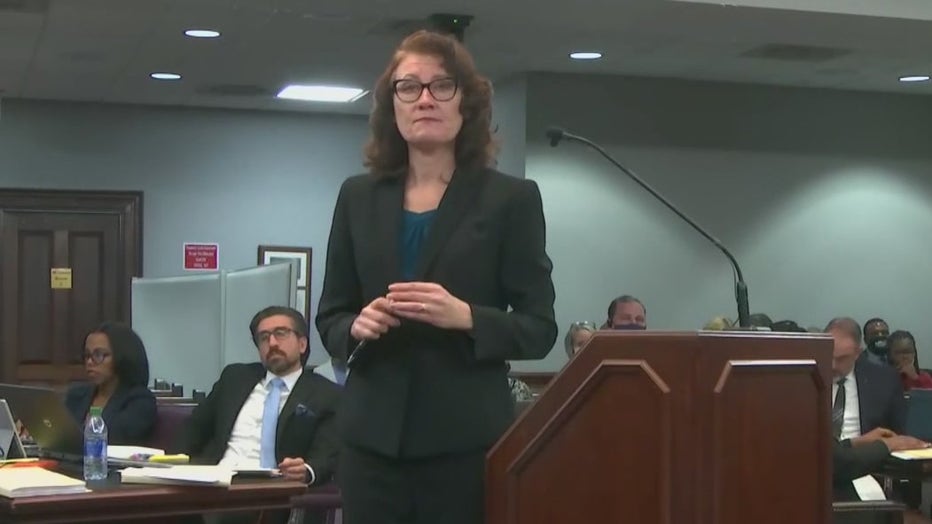 Prosecutor Linda Dunikoski questions Matthew Albenze, who testified he was splitting logs in his front yard on the day of the shooting when he saw Ahmaud Arbery enter the home under construction across the street. (FOX 5 Atlanta)

In court, another neighbor, Matthew Albenze, testified he was splitting logs in his front yard on the day of the shooting when he saw Arbery enter the home under construction across the street.

Albenze testified Wednesday that he went inside his house and put a handgun in his pocket before he called police from behind a tree at the curb. Arbery left the house running toward the McMichaels’ home while Albenze was on the phone.

Albenze told the jury he called the police nonemergency number. Dunikoski asked him: Why not 911?

He replied: "I did not see an emergency."

On the witness stand Wednesday, Nohilly pushed back as one of Greg McMichael’s attorneys asked if raising a gun would be an appropriate response to a fleeing suspect who refused verbal commands to stop.

Hogue then asked: "At some point, if the person is going to attack you, you’ll go ahead and use your weapon."

"It depends on how he’s attacking me," Nohilly said.

Hogue then asked him what if the attacker is trying to take his gun away.

"At that point, it might meet the threshold, yes," the police sergeant said.