ATLANTA - After four and a half decades of asking "What’ll ya have… What’ll ya have?" a beloved member of The Varsity has an order up for some rest with a side of relaxation and maybe a Varsity Orange every so often. Family, friends, and regulars said goodbyes to Mrs. Rebecca Dablah and wished her well on her retirement this week.

Mrs. Dablah joined the Varsity, the world’s large drive-in restaurant located in the heart of Atlanta, back in 1976. Since then, she has worked alongside four generations of the Gordy family, who have owned the iconic Midtown establishment since 1928. 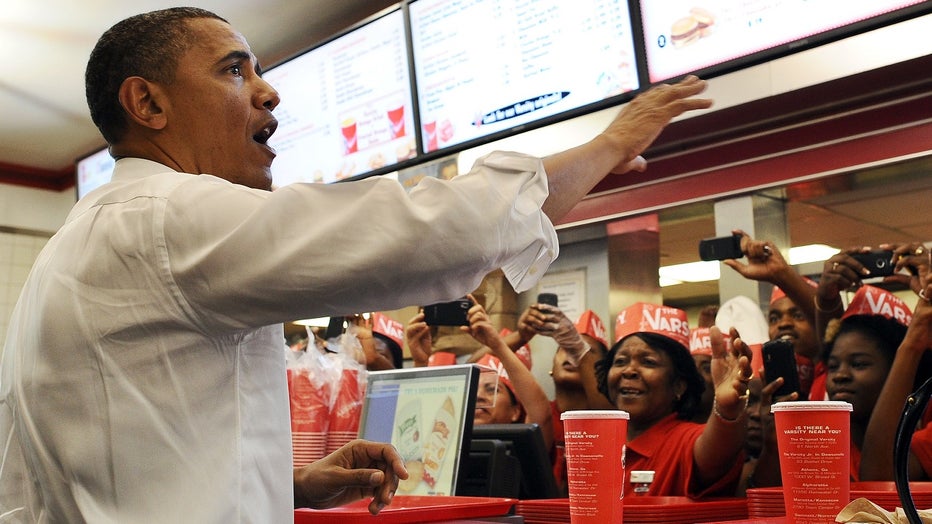 US President Barack Obama orders his meal at the Varsity restaurant in Atlanta, Georgia, on June 26, 2012. Obama hit the campaign trail, shadowed by a week of fateful events at home and abroad weighing heavily on his knife-edge hopes of reelection. A

Mrs. Dablah was spotted behind the counter in a 2012 photo with President Barack Obama who dropped in at the Varsity during a campaign stop in Atlanta.

Regulars said she knows them and treats them like family.

"Her incredible work ethic is admired by all of her coworkers, she has been a shining example of what it means to be a Varsity team member," The Varsity wrote on its Facebook page.

The Varsity threw Mrs. Dablah a party, bringing her family together with her work family. They got her a cake and, of course, they took lots of photos.

"We will miss you Mrs. Rebecca and wish you all the best in your retirement. We can thank you enough for everything you have done for all of us here at The Varsity. We love you!"