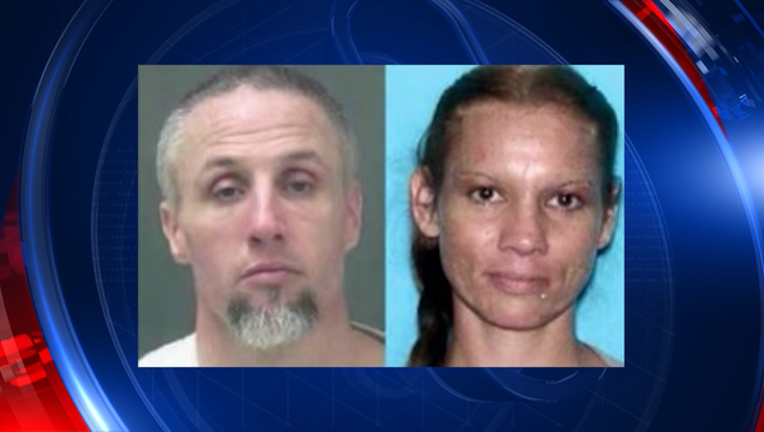 MIAMI (AP) - A woman accused in the deaths of four women in Alabama and Florida was "a willing participant" in a killing spree that ended with the other suspect fatally shooting himself in a Georgia motel room as a SWAT team closed in, according to an arrest warrant.

Mary Rice, 37, faces multiple charges in Alabama and Florida in connection with the women's deaths. She surrendered Tuesday in West Point, Georgia, after a standoff at the motel where she had been holed up with William "Billy" Boyette.

Law enforcement officials said the two were involved in a crime spree that began Jan. 31 with the deaths of Jacqueline Jeanette Moore, 39, and Alicia Greer, 30, at the Emerald Sands Inn in the city of Milton, in Florida's Panhandle.

Authorities said they are also suspected in the death of Peggy Broz, 52, who was stalked and followed Feb. 3 from her job at Baptist Health Care in Pensacola, Florida, to her home across the state line in Lillian, Alabama.

Three days later, on Monday, authorities said, they believe Boyette and Rice shot Kayla Crocker, 28, in her home near Pensacola and took her car. Crocker died Tuesday afternoon, the same day the pair was tracked to the motel in Georgia.

An arrest report from Santa Rosa County, Florida, said Boyette had been living with Rice in Milton before the crime spree began. Authorities previously said that Greer, one of the first victims, was Boyette's girlfriend.

According to the affidavit, Boyette's mother - who wasn't named in the document - rented a black Ford Edge on Jan. 30 in the name of one of the victims. The next day Greer and Moore were found dead, and sheriff's investigators said Boyette "was immediately determined to be a suspect in the murders" and his photograph was circulated to media outlets.

On Feb. 3, a dark colored SUV was spotted leaving Broz's house, some 15 miles from Pensacola, the arrest report said. A white Chrysler Concord belonging to Broz also was taken from the home. Broz was found dead at her home, and later that day the rented SUV was found in a parking lot near Pensacola. Investigators reviewed surveillance video from the area that showed the Chrysler followed the SUV to the parking lot and a woman got out of the SUV and into the stolen Chrysler.

The next day the stolen car was found abandoned near Interstate 10, the arrest report states. Inside, investigators found receipts from a Wal-Mart and GNC stores in Crestview, Florida. The receipts - dated Feb. 2 - were in Rice's name and indicated she had purchased ammunition, hand warmers and a sleeping bag, according the arrest warrant. Surveillance from Wal-Mart shows Rice getting out of a dark SUV, while another individual waits inside. After making the purchases, she returned to the SUV and it drove off.

Photographs from a game camera in a wooded area outside Pensacola show Boyette and Rice carrying the items she purchased through the woods on Feb. 5, the affidavit said. Early the next morning, Crocker was shot. Her 2-year-old son wasn't injured.

Sheriff's officials believe the pair had been hiding in the woods near her home.

Authorities said Rice was "a willing participant" in the crime spree. Santa Rosa County Sheriff Bob Johnson told local news outlets Rice had several opportunities to break away from Boyette as she went in and out of stores.

Rice was extradited to Florida on Wednesday. On Thursday, a judge in Santa Rosa County set bond at $750,000 on a charge of accessory after the fact to first-degree murder. She also faces charges in nearby Escambia County and a capital murder charge in Alabama.

At a news conference Thursday in Alabama, Baldwin County District Attorney Robert Wilters said once investigations into all the killings are complete, prosecutors from both states will decide who will prosecute Rice first. Florida may go first, he said.

"They have her," said Wilters. "That's their trump card."

But Wilters' office could push to prosecute the woman before Florida because Alabama has an active death penalty law, while Florida's is in limbo because of court rulings on the way juries can recommend capital punishment.

According to court records, Boyette was a habitual offender who was accused of beating and stabbing previous girlfriends. Authorities said he had only been out of jail for four months on a probation violation when the first two women were killed.