Several activists came together Thursday to call on Northfolk Southern to release the archeological study of the site of the Chattahoochee Brick Company, where slaves were used as manual labor.

ATLANTA - Historians who've studied what happened on the grounds of the industrial site along Bolton Road and Interstate 285 said Black teenagers and young adult prison inmates were forced to build bricks for the Chattahoochee Brick Company a century ago. Thursday, community activists called the names of some of the teens in front of the midtown headquarters of Norfolk Southern Thursday--including males as young as 16 years old.

The community activists made several demands of Norfolk Southern-- which has rail construction and developing rights to a site through a leasing agreement with Lincoln Energy Solutions, the owner of the property. Thursday, Norfolk Southern issued a statement indicating archaeological consultants determined there was no evidence of human remains at the site in northwest Atlanta. Activists take issue with that assessment.

"We're very clear. Release the archaeological study that suggests that there's nothing there publicly so that we can test it against what we think is true. And with all the millions Norfolk Southern has made, they should donate the land to the city so that it can be turned into a memorial ground where our ancestors' souls can rest in peace," said community activist and former Atlanta City Councilman Derrick Boazman.

Norfolk Southern initially planned to build fuel tanks on the property but backed down in February after pressure from the community and an injunction filed by Mayor Keisha Lance Bottoms.

"We had worked with Norfolk Southern and asked that they not build over the bodies and graves of our ancestors. There's no question what happened to our people there," said Rev. Timothy McDonald of Concerned Black Clergy. 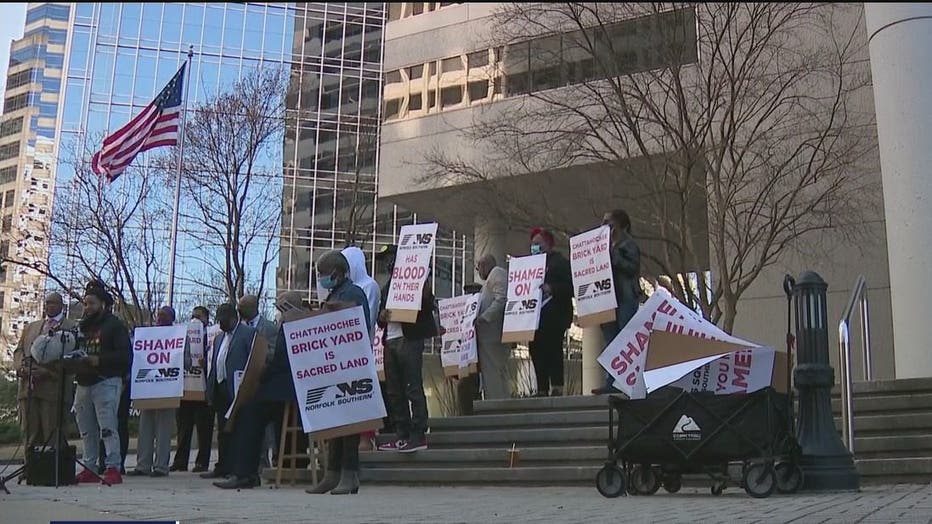 Activists gathered at the Northfork Southern headquarters in Atlanta on March 4, 2021 to protest plans for the site where the Chattahoochee Brick Company once stood. (FOX 5)

About the decision to stop construction on the site, Norfolk Southern spokesman Jeff DeGraff said the company worked with local officials and interested stakeholders, then turned over their archaeological findings to city officials.

"We still agree that what happened at the Chattahoochee Brick Company needs to be fully acknowledged. We do not have a role in determining what should be done there," DeGraff wrote in the statement issued to FOX 5.

Activists said they will continue to press the company to share archaeological documents with the historians they've worked with, including Doug Blackmon, the author of "Slavery by Another Name." Blackmon's book details the deplorable conditions under which teens and inmates, most of whom were Black males, were leased into forced labor in the late 19th and early 20th centuries.

"If you can't respect the dead, you will never respect the living. Norfolk Southern needs to own up to what they were trying to do through back door deal and just do right by our ancestors," said former State Senator Vincent Fort.