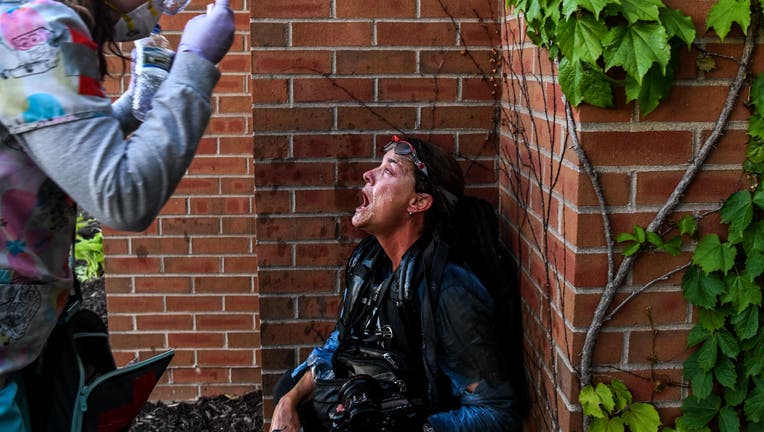 FILE - A medic protester assists a member of the media after police started firing tear gas and rubber bullets near the 5th police precinct during a demonstration to call for justice for George Floyd, a black man who died while in custody of the Minn

MINNEAPOLIS - The American Civil Liberties Union (ACLU) of Minnesota has announced that is filing a class-action lawsuit against Minnesota’s state and local law enforcement officials, citing instances in which journalists have allegedly experienced “repeated abuse” by law enforcement officers while covering protests in the wake of the death of George Floyd.

The announcement comes as videos and images continue to surface of questionable police tactics on demonstrators who have been protesting in response to the death of Floyd, in addition to multiple reports from journalists who have been arrested or injured by police while covering protests across the country.

“If the government refuses to hold its officers accountable for their unlawful actions, we will,” the ACLU said. “This lawsuit will be the first of several we intend to file in states across the country. We will not rest until the press is once again free to report the news without fear or favor.”

Dozens of incidents have been reported in which reporters were injured, assaulted or harassed by either protesters or police officers.

Protests have continued around the world after Floyd, a black man, was killed on May 25 when a white police officer who is now charged with murder, Derek Chauvin, pressed his knee into Floyd’s neck for several minutes even after he stopped moving and pleading for air.

“Throughout the George Floyd protests, there have been numerous, well-documented instances of deliberate abuse against journalists by law enforcement officers,” The ACLU wrote in a statement released on Wednesday.

The organization added that it is also pursuing legal action to help prevent police brutality against protesters and organizers.

Officers have been seen dousing crowds with pepper spray, striking demonstrators with batons and even driving police cars into throngs of people. Even U.S. lawmakers have been subject to the controversial response by police seen on social media.

U.S. Rep. Joyce Beatty, who was hit by pepper spray Saturday as scuffles broke out near the end of a demonstration in Columbus, Ohio, said police escalated matters by using heavy-handed tactics against “passionate” young demonstrators who were mostly orderly.

“Too much force is not the answer to this,” said Beatty, who pressed for peaceful tactics on both sides in a video posted on Twitter by Columbus City Council president Shannon Hardin, who also was pepper-sprayed. Both are African American.

The ACLU pointed out a handful of instances of alleged abuse against journalists that have been recorded in Minnesota, which it says represent a growing trend of police brutality that is being documented around the country.

Some of the examples include:

RELATED: CNN crew released after being arrested while reporting live in Minneapolis

The Radio Television Digital News Association counted more than 60 incidents over the weekend in which reporters were “injured, assaulted or harassed by either protesters or police officers," while the U.S. Press Freedom Tracker, a database documenting press freedom violations in the U.S, said it was investigating more than 100 violations at protests around the country.

On Saturday in Minneapolis, officers shot rubber bullets at MSNBC host Ali Velshi and his crew. Velshi said he was hit in the leg.

“We put our hands up and yelled, ‘We’re media!’” Velshi said. “They responded, ‘We don’t care!’ and they opened fire a second time.”

The incident occurred after Minnesota Gov. Tim Walz promised that journalists would not be interfered with following the arrest last week of a CNN crew on live television in Minneapolis and other reports of violence against reporters.

Freelance photographer Linda Tirado was also shot while covering an anti-police brutality protest in Minneapolis and said she is now blind in her left eye.

Dan Shelley, the executive director and chief operating officer of the Radio Television Digital News Association, said while all the attacks on journalists were “outrageous and unacceptable" that he was particularly upset about the Minneapolis incidents that happened after the governor made his reassurances.

“They started deliberately attacking journalists who were clearly identifiable and identifying themselves as journalists,” Shelley said. “We’ve heard a number of instances of police officers, either through their words or actions, saying that they just didn’t care. To be a journalist in the Twin Cities last night, particularly in Minneapolis, if you were just arrested, you were lucky.”

In Chicago, Vice reporter Michael Adams had a similar interaction to Velshi and Hennessey-Fiske when police raided the gas station he and his crew were sheltering at and said they “didn’t care” that they were press.

“After shouting press multiple times and raising my press card in the air, I was thrown to the ground,” Adams wrote on Twitter. “Then another cop came up and peppered sprayed me in the face while I was being held down.”

The Prime Minister of Australia, Scott Morrison, recently condemned an attack by police officers on two Australian journalists who were covering protests outside the White House on Monday.

According to the New York Times, the two journalists were on assignment for one of Australia’s major networks, Channel 7.

According to a statement obtained by the Times, the Australian ambassador to the United States, Arthur Sinodinos, said, “I understand that Channel 7 will make a formal police complaint asking to have the matter investigated.”

The U.S ambassador to Australia, Arthur B. Culvahouse Jr., issued a statement on the attacks on Twitter, saying, “Freedom of the press is a right that Australians and Americans hold dear. We take mistreatment of journalists seriously, as do all who take democracy seriously.”

According to the ACLU, The Reporters Committee for the Freedom the Press and the U.S. Press Freedom Tracker have also identified numerous accounts of alleged abuse against journalists from police in cities across the country.

“These attacks violate the press’s clearly established First Amendment right to report on public protests and police activities,” the ACLU said. “An open society depends on a free press to keep the public informed and to bear witness to government actions.“