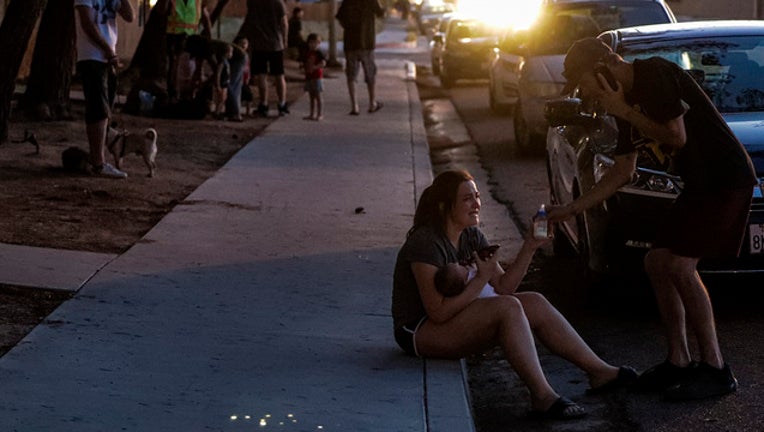 Massive earthquake 7.1 hit Ridgecrest. The Speed Family rain out of their apartment and into the street after the massive quake. (Irfan Khan / Los Angeles Times via Getty)

LOS ANGELES, Calif. (FOX 11) - Officials provided an update Saturday morning after a preliminary 7.1 magnitude earthquake struck about 11 miles from Ridgecrest at about 8:19 p.m. Friday, according to USGS.

The quake was initially downgraded to 6.9 magnitude before ultimately being upgraded to 7.1 by USGS.

The quake was felt widely in the Los Angeles area Friday evening. A slew of aftershocks followed.

The Los Angeles Fire Department activated their teams under "Earthquake Emergency Mode," which included the use of fire department vehicles and helicopters patrolling their 470 square-mile jurisdiction checking for any damage or emergency needs. No major infrastructure damage was found.

Gov. Newsom went on to say that he "also activated the State Operations Center in Mather, California to its highest level and the center is already working closely with state, federal and local emergency managers and first responders."

Several neighborhoods in Los Angeles experienced power outages, according to the Los Angeles Fire Department. About 1,000 people are affected. Southern California Edison Crews worked to restore power to residents in the affected areas.

No loss of life has been reported as a result of the 7.1 earthquake.

According to the National Weather Service the major quake was felt in Las Vegas and parts of Arizona.

Several roadways closer to the epicenter were impacted by Friday's earthquake. State route 178 through Kern River Canyon, which leads to Ridgecrest, was shut down in both directions following a rockslide related to the quake. It reopened shortly before 12:30 a.m.

Dr. Lucy Jones with Caltech says Friday's quake has a 1 in 20 chance of being followed by something even bigger. Magnitude 5 and 6 quakes are possible, according to Jones.

Ridgecrest Police Chief Jed Mclaughlin says there is no water contamination in Ridgecrest stemming from the 7.1 quake and thee hospital is sheltered in place and minor injuries such as cuts and bruises were reported following tonight's temblor.

Ridgecrest's mayor says many residents are choosing to spend time with neighbors outdoors in the sidewalks because they're afraid to stay inside their homes.

Gov. Newsom went on to say that he "also activated the State Operations Center in Mather, California to its highest level and the center is already working closely with state, federal and local emergency managers and first responders."

Authorities ask that the public use 911 for life-threatening emergencies only.

Friday's earthquake eclipses the one that struck the Ridgecrest area on the Fourth of July. Officials there say there are currently no reports of major building collapses at this time but crews will continue to work assessing damages in the Ridgecrest area.

More aftershocks are expected through the weekend. For more information on earthquakes visit our earthquakes page at FOXLA.com.

This is a developing story. Check back for updates.