San Francisco on Tuesday has voted to recall progressive District Attorney Chesa Boudin in a heated campaign that bitterly divided Democrats over crime, policing and public safety reform. Partial returns showed Boudin losing in what is expected to be a low turnout election. Early returns showed 61% of votes in favor of the recall.

LOS ANGELES (AP) - U.S. House battles took shape in heavily Democratic California that could tip the balance of power in Congress, while former Trump administration Interior Secretary Ryan Zinke was in a tight match to claim the Republican nomination for a new House seat in Montana.

In Mississippi, Republican U.S. Rep. Steven Palazzo was forced into a runoff after a congressional ethics watchdog raised questions about his campaign spending and he faced his largest-ever field of primary challengers.

Primary elections across seven states Tuesday set up November contests in dozens of races, as Democrats look to protect the party's fragile majority in the House.

In other districts in the nation's most populous state, two Republican House members were trying to surmount challenges tied to former President Donald Trump: One voted to support Trump's impeachment after the U.S. Capitol insurrection, while the other fought against it.

A look at results in key U.S. House races Tuesday:

In 2020, Republican U.S. Rep. Mike Garcia won a narrow victory in a Democratic-leaning district north of Los Angeles. The former Navy fighter pilot was endorsed by Trump that year, then joined House Republicans who rejected electoral votes from Arizona and Pennsylvania and opposed Trump’s impeachment after the Capitol insurrection. That record will be a focus for Democrat Christy Smith, who earned a chance for a rematch with Garcia, after losing two years ago.

In a Democratic-tilting district in the state’s Central Valley farm belt, Republican Rep. David Valadao is highlighting an independent streak while contending with GOP fallout for his vote to impeach Trump over the Jan. 6 insurrection. Preliminary returns showed him holding an edge over Republican Chris Mathys, who made Valadao’s vote a centerpiece in his campaign to oust him. The winner will face Democrat Rudy Salas, a state legislator.

California uses a top-two election format in which only the two leading vote-getters advance to the November general election, regardless of party.

Republican U.S. Rep. Steven Palazzo of Mississippi is headed to a June 28 runoff.

The congressman first elected in 2010 failed to win the GOP nomination outright on Tuesday, earning less than 50% of the vote.

His opponent will either be Jackson County Sheriff Mike Ezell, who is also campaigning on border security, or Clay Wagner, a retired banker who says he wants to limit taxation and regulation.

A 2021 report by the Office of Congressional Ethics found "substantial reason to believe" Palazzo, a military veteran who serves on the Appropriations and Homeland Security committees, abused his office by misspending campaign funds, doing favors for his brother and enlisting staff for political and personal errands. His then-spokesperson, Colleen Kennedy, said the probe was based on politically motivated "false allegations."

Montana gained a second congressional district this year thanks to its growing population, and Zinke, an Interior Department secretary under Trump, is one of five Republicans on the primary ballot for the open seat.

Zinke's rivals have been drawing attention to his troubled tenure at the agency, which was marked by multiple ethics investigations. One investigation determined Zinke lied to an agency ethics official about his continued involvement in a commercial real estate deal in his hometown. He’s faced a smear campaign over his military service from the extreme right wing of his party and questions about his residency following revelations that his wife declared a house in California as her primary residence.

Zinke, a former Navy SEAL, is widely considered the de facto incumbent, since he twice won elections for the state’s other House seat before stepping down in 2017 to join the Trump administration.

His primary opponents include former state Sen. Al "Doc" Olszewski, an orthopedic surgeon and hard-line conservative who has tried to paint Zinke as a "liberal insider." The winner will face Olympic rower and attorney Monica Tranel, a Democrat, in the general election. 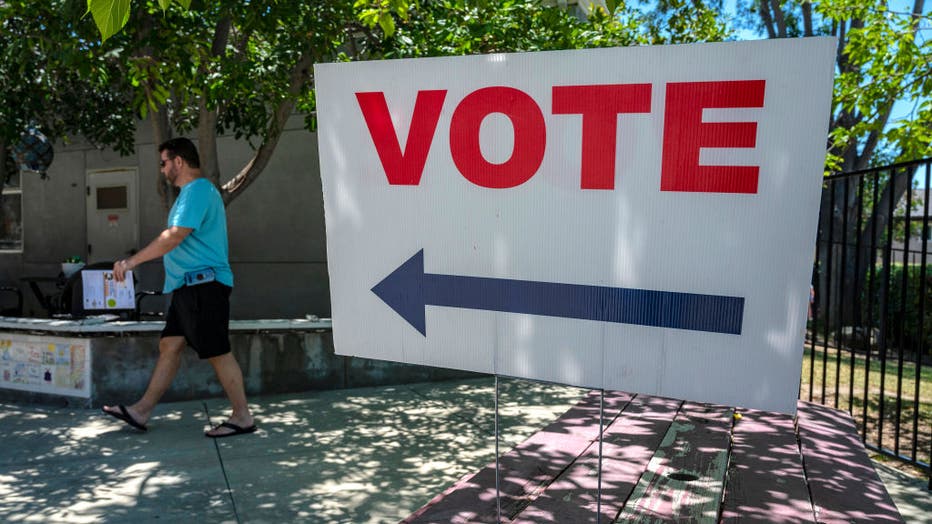 North Tustin, CA - June 07: A man walks past a vote sign outside the Vote Center at the Church of the Foothills in North Tustin for the California primary election, on Tuesday, June 7, 2022. (Photo by Mark Rightmire/MediaNews Group/Orange County Regi

A Republican state senator has captured the slot to take on Democratic Rep. Cindy Axne this fall in a newly drawn district that appears more favorable for the GOP.

Axne is the only Democrat in Iowa's House delegation.

State Sen. Zach Nunn easily outdistanced rivals Nicole Hasso, a financial services worker, and Gary Leffler, who works in the construction industry, to claim the GOP spot. Nunn, an Air Force pilot who has served in the Legislature since 2014 and has worked to cut taxes, was the best known among the GOP contenders.

In previous elections, Axne was elevated by her strong support in the Des Moines area, even as she struggled in rural counties that typically lean Republican. The new district includes several counties in southern Iowa known to turn out strongly for Republicans, increasing the pressure on Axne to drive up her numbers in Democrat-friendly Des Moines and its suburbs.

In what could be New Jersey’s most closely watched contest in the fall, Democratic U.S. Rep. Tom Malinowski and Republican Tom Kean Jr. won their primaries, setting up a rematch of their closely contested 2020 race.

Malinowski, a State Department official in the Obama administration, is seeking a third term as his party faces headwinds heading into the general election. His district added more Republican-leaning towns during redistricting, making his reelection bid potentially more difficult.

Another complicating factor is an ethics investigation he’s facing over stock transactions in medical and tech companies that had a stake in the pandemic response. A report from the Office of Congressional Ethics said the board found "substantial reason to believe" he failed to properly disclose or report his stock transactions.

Malinowski said his failure to initially disclose the transactions was "a mistake that I own 100%." He said he didn’t direct or even ask questions about trades made by his brokerage firm.

Kean, a former state Senate minority leader and the son of the former two-term Republican governor, said in a tweet that he was humbled by his victory and looks forward to seizing the seat in November.

U.S. Rep. Dusty Johnson of South Dakota won his state’s GOP primary contest as he runs for a third term.

Johnson defeated state lawmaker Taffy Howard, who tried to run to his right. He is set for reelection in November because no other candidate has entered the race.

Howard repeated Trump’s lies that there was widespread fraud in the 2020 election and attacked Johnson for certifying the electoral college vote. While Johnson touted his conservative voting record during the primary contest, the congressman has also worked with a bipartisan group of lawmakers called the Problem Solvers Caucus.

Johnson held a large fundraising advantage in the contest, but also drew attacks from a pro-Trump political action committee called Drain the DC Swamp, which spent $500,000 trying to knock him from the House.