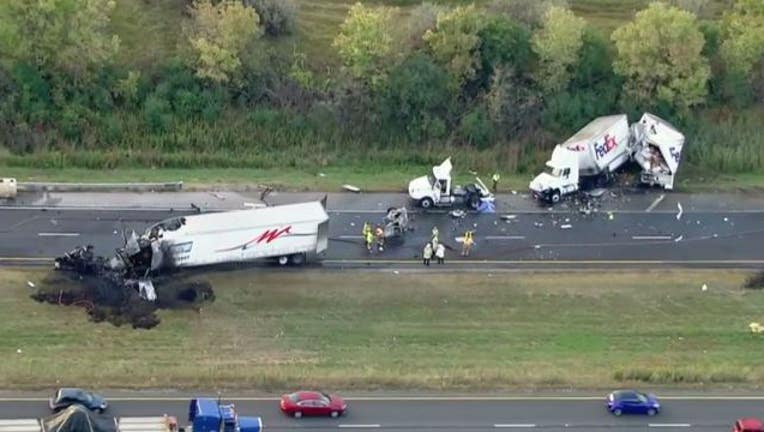 JOLIET (Sun-Times Media Wire) - Two people were killed and another person was seriously injured in a three-vehicle crash that closed part of Interstate 80 for more than 10 hours Tuesday near southwest suburban Joliet.

At 6:12 a.m., a disabled truck tractor driven by a west suburban La Grange man and double trailer were parked on the right shoulder of I-80 eastbound at milepost 129, according to a statement from Illinois State Police.

A replacement truck tractor responded to the scene to assist and parked on the shoulder in front of the disabled truck, ISP said. Sami Guzick, 50, of Joliet, was assisting with the vehicles when a semi truck veered off onto the right shoulder, striking the rear of the double trailer and Guzick, before becoming engulfed in flames.

The driver of the semi, a 46-year-old  Chicago man, and the 49-year-old La Grange man, were taken to hospitals with serious injuries, ISP said. Guzick was pronounced at the scene by the Will County coroner’s office.

One of the men was airlifted to Loyola University Medical Center in Maywood, where he died at 9:09 p.m., according to the Cook County medical examiner’s office. His name was not released Wednesday afternoon. An autopsy found he died of full-body burns in the crash, and his death was ruled an accident.

The interstate was shut down for hours while the Illinois State Police Reconstruction Unit was at the scene and clean-up crews removed the remaining debris, ISP said. All eastbound lanes of I-80 were reopened as of about 5 p.m.

The crash is still under investigation and charges are pending.