ATLANTA - In a year where every team persevered through uncertainty, only one could be named the High 5 Sports Team of the Year. Metro Atlanta was home to GHSA state champions in 7A (Grayson), 6A (Buford), 4A (Marist), and 2A (Callaway) and Class -Private (Prince Avenue). What pushed Marist over the top were their numbers.

The War Eagles completed an undefeated 13-0 season in which they outscored opponents by an average of 33 points per game. Their stingy defense allowed just over 3 points per game and shut out 8 of their 13 opponents including three in the playoffs.

Marist faced ranked teams in 8 of their 13 games. That included wins over 6 teams ranked inside the top 10 in 4A and wins over ranked 5A foe Woodward Academy and A-Private ranked Holy Innocents. 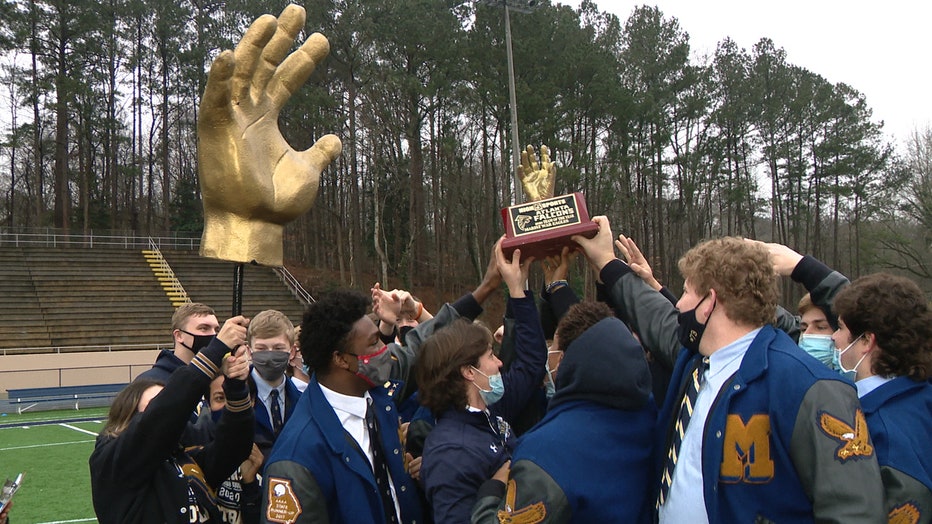 The War Eagles' path to their third state title also saw them hit the road from the quarterfinal round on. Road wins at Perry and Bainbridge and a neutral site 30-14 win over second-ranked Jefferson in the championship game.

Marist head coach Alan Chadwick has now collected 399 wins and three state titles in his 36 seasons as head coach of the War Eagles. He will not just remember this team by their gaudy statistics.

"These guys came to work every single day and gave us everything they had and did a remarkable job for us. They played hard, played with great passion, played together as teammates. We're extremely proud of them," said Chadwick.

Longtime Marist athletic director Tommy Marshall will be retiring at the end of the school year, but he was unable to attend the state championship game because he was in COVID-19 quarantine. On Thursday, Marshall was able to celebrate with the team and he was the one who presented the famous High 5 Sports hand trophy to the team.