Rain ended in the metro Atlanta area late Friday afternoon, but the FOX 5 Storm Team continues to track possible damaging winds and any other severe weather.

ATLANTA - Georgians will want to be weather aware throughout Friday as another round of severe storms moves through, bringing an increased risk of dangerous weather.

A warm front followed by a cold front will be moving in, bringing the threat of heavy rains, damaging winds, and possible spin-up tornadoes. 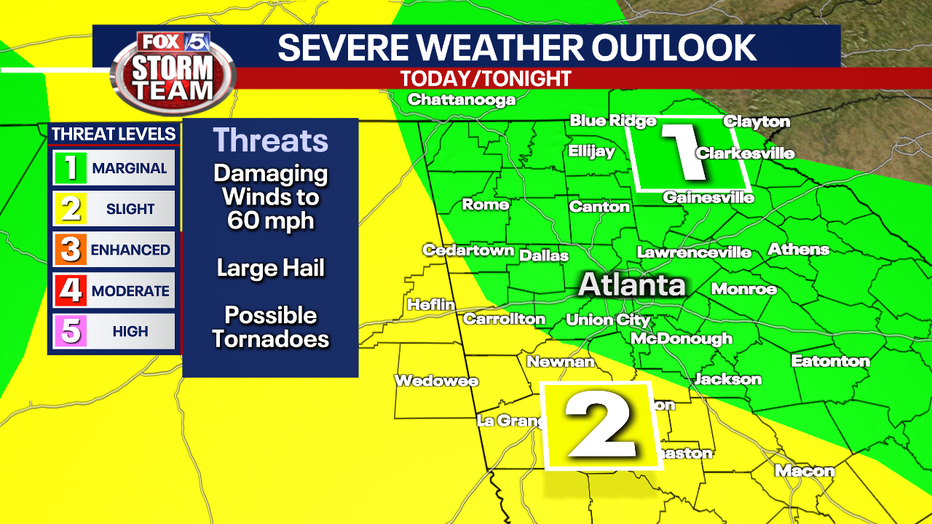 What is the timing of Friday's severe weather threat in Georgia ?

The threat will remain through the early afternoon, but there will be a second round of scattered storms around and after sunset.

Where is the greatest threat of severe weather in Georgia on Friday?

The fronts will impact much of the Deep South with the biggest threat, a Level 3, along the Gulf Coast from Mississippi through Alabama and into the Florida Panhandle.

The highest risk in Georgia is in areas south and west of metro Atlanta. Most of Georgia will be at a threat level of 2 - where damaging winds of up to 60 miles per hour, large hail, and tornadoes are possible.

While the western areas have the biggest threat level, all the FOX 5 viewing area has at least some level of risk.

What threats could this severe weather bring to Georgia on Friday?

The storms could bring widespread rainfall of one to two inches, and as much as three inches in isolated areas. There will be a lot of wind associated with the front and some thunderstorms that could pack damaging winds. 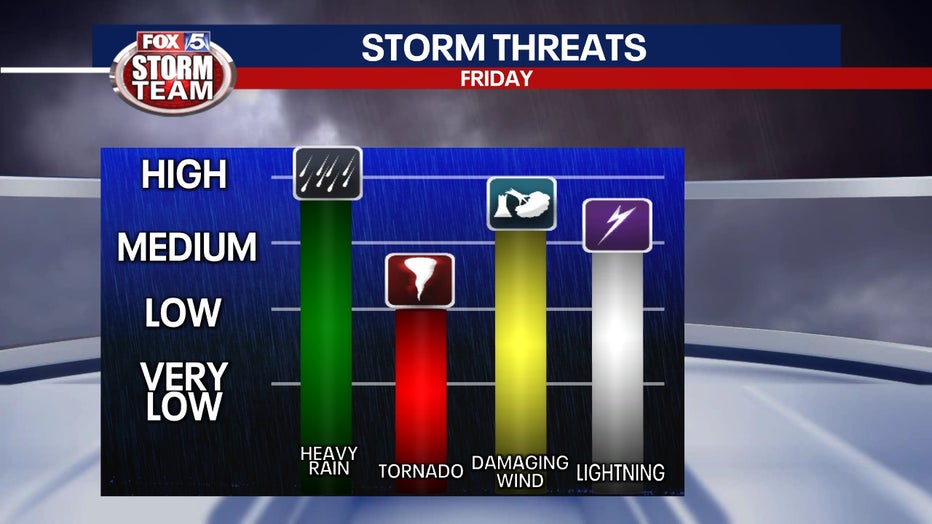 There is shear in the atmosphere, but not a lot of instability, which is why the tornado risk is lower in Georgia. Still, the potential for a spin-up tornado cannot be completely ruled out.

What does the rest of the weekend and week ahead look like?

Once the front moves through on Saturday, folks will be waking up to temperatures in the low-to-mid 50s. It won’t warm up too much on Saturday with temperatures reaching the mid-to-upper 60s.

It will get sunnier as the weekend progresses with Sunday being sunnier and warmer with highs in the low 70s and lows in the mid 40s.

There will be a warming trend through Tuesday when the clouds return and another round of showers and thunderstorms also return on Wednesday.