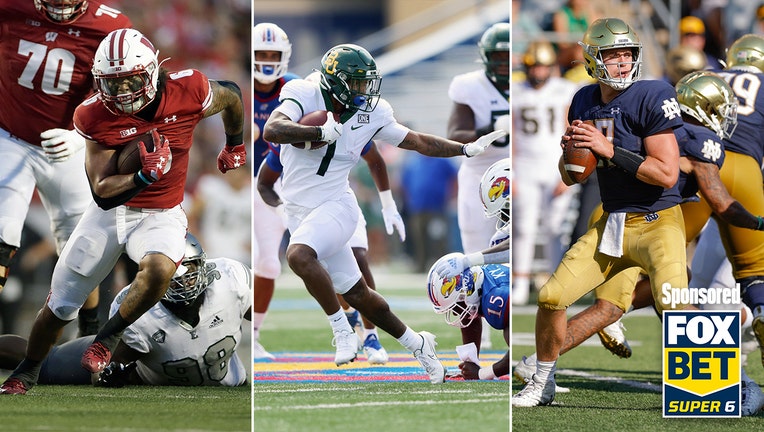 As we enter Week 4 of the college football season, there is still a lot that we don't know.

Clemson and Ohio State have looked mortal and have been wounded already. Alabama had to survive a scare before holding onto No. 1 last week against Florida. Notre Dame’s record has remained flawless, but its status as a contender has taken a serious hit. And the road to a Big Ten title currently appears to go through Iowa City and Happy Valley.

More questions should develop on the final Saturday of September, with conference schedules starting to pick up this week.

And Saturday is another chance to win with FOX Bet Super 6. Pick the winners of all six marquee games with their margins of victory, and you could win the grand prize of $25,000. It’s fast, and it’s free, and all it takes is downloading the FOX Super 6 app on your phone or mobile device.

Here is a look at Saturday’s action.

This marquee matchup takes place on Lakeshore Drive, where the Irish and Badgers seek to regain some swagger and national respect after shaky starts. The question for the Irish is whether quarterback Jack Coan get enough time to open up the Notre Dame passing game. If he does, the Irish find a way to win.

The best team in the country right now is Georgia, which had an impressive win over Clemson on Opening Night and has JT Daniels making a strong case for the Heisman Trophy. The Georgia defense is allowing only 7.7 points per game. Say a prayer for the Commodores.

The Razorbacks' thumping of Texas is their entry point into the conversation for a potential SEC run. The Aggies' best opponent was Colorado, a team they struggled to beat at a neutral site two weeks ago with a flailing offense. And yet the Aggies' nine-game winning streak over the Razorbacks, and the overall depth of Jimbo Fisher’s squad, make them the pick.

Matt Campbell’s team bounced back from the home loss to Iowa with a resounding 48-3 win over UNLV last week. Breece Hall is the best reason to watch this game – the Iowa State running back is dynamic beyond belief. And yet, Baylor’s Abram Smith has more yards. If the Bears win this one, the Cyclones season could spiral out of control. Still, it would be surprising to see them drop this one.

Just when you thought you had this all figured out, UCLA goes and loses at home to Fresno State last week, tossing the feel-good Chip Kelly storylines into the trash. The Cardinal play their first home game after road games in Los Angeles and Nashville. If Tanner McKee gives the Cardinal a mistake-free game, Stanford should end up in the Pac-12 title conversation.

In theory, Oklahoma wasn’t supposed to sweat out Nebraska last Saturday. Maybe it was a rivalry game abnormality, but Spencer Rattler needs to be better if he wants to stay in the Heisman race. Can Leddie Brown and Jarret Doege head to Norman and beat a second-straight top-15 team after beating Virginia Tech? Color us skeptical.

Download the FOX Bet Super 6 app now to predict the outcomes of the biggest events in sports, and you could win thousands of dollars absolutely for free each and every week. Just download and play!