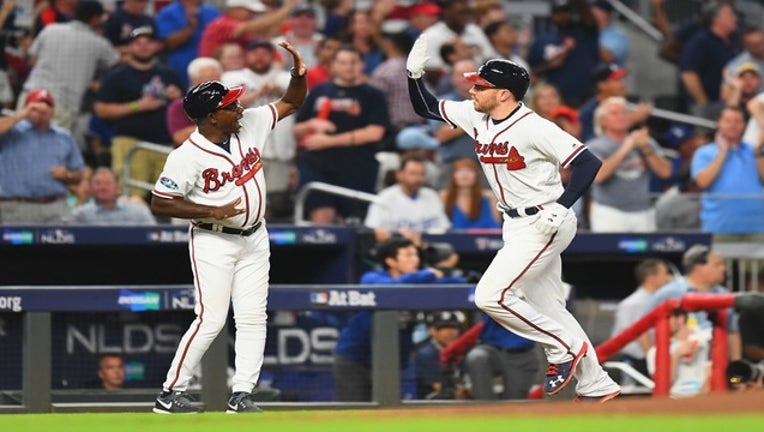 ATLANTA (AP) - Reliever Arodys Vizcaino escaped his own jam in a nervy ninth inning and the Atlanta Braves held off the Los Angeles Dodgers 6-5 Sunday night, cutting their deficit in the NL Division Series to 2-1.

Rookie Ronald Acuna Jr. hit a grand slam that helped the Braves build an early 5-0 lead. Atlanta blew that advantage, but Freddie Freeman hit a tiebreaking homer in the sixth.

Then in the ninth, the Dodgers got runners on first and second with no outs. Vizcaino came back from a 3-0 count to strike out slugger Max Muncy, then fanned Manny Machado on a wild pitch that moved the runners to second and third.

With the entire crowd at SunTrust Park standing, chanting and chopping, Vizcaino fanned a swinging Brian Dozier to end it.

Game 4 is Monday afternoon at Atlanta.

Shut out in the first two games at Dodger Stadium, the NL East champion Baby Braves bounced back.

"My heart's still pounding," Freeman said, moments after the last out. "That's how we've been all year."

"I like our chances. We've got a uniform on, so we know we've got a chance," he said.

At 20, Acuna became the youngest player to hit a postseason grand slam - Mickey Mantle was 21 when he did it for the New York Yankees in the 1953 World Series.

Freeman connected on the first pitch from former teammate Alex Wood to put Atlanta back on top.

Chris Taylor hit a two-run homer and Muncy added a tying homer in the fifth to lead the comeback for Los Angeles.

Tagged at the outset, Buehler regained control as the Dodgers began their rally. Newcomb was pulled after walking a pair of walks in the third and Justin Turner hit an RBI single off Kevin Gausman. Taylor also scored when Acuna bobbled the ball in left field for an error.

Taylor connected off Gausman, and Muncy added a tying homer off Max Fried in the fifth.

The Dodgers threatened in the sixth. Matt Kemp led off the inning with a double, but with one out was thrown out on shortstop Charlie Culberson's throw to the plate.

Los Angeles was denied its second straight NLDS sweep after winning three straight over Arizona in 2017.

The attendance was 42,385, setting a SunTrust Park record in the second-year stadium's first postseason game.

The Dodgers could start LHP Rich Hill (11-5, 3.66) when the series continues on Monday.

The Braves are expected to start RHP Mike Foltynewicz, who gave up four runs and three hits in two innings in Thursday night's 6-0 Game 1 loss.