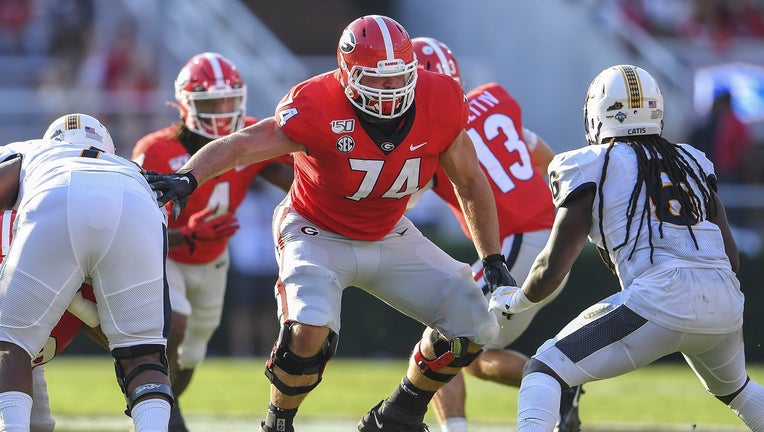 ATHENS, Ga. - After a junior season dealing with nagging injuries and an academic suspension for the Sugar Bowl, Georgia offensive guard Ben Cleveland has started his senior season with an award-winning performance.

The Southeastern Conference named Cleveland as its Offensive Lineman of the Week Monday.

This marks the second career SEC weekly honor for Cleveland who earned the same award following the shutout victory versus Missouri in 2019.

The Toccoa native had five knockdown blocks and graded out at 83 percent during the Bulldogs' 27-6 win over No. 7 Auburn.

Part of a newly aligned unit after three 2019 Bulldog linemen were drafted by the NFL and fellow lineman Cade Mays transferred to Tennessee, Cleveland helped allow Georgia's backs to go for 202 rushing yards and two touchdowns on 45 carries for a 4.5 per run average.  Cleveland helped starting quarterback Stetson Bennett get sacked only a single time against the Tigers.

On Monday, Cleveland talked to reporters about the difference between last season and this season.

Cleveland said, “I’ve never seen a problem with our environment. I like our team and I like our coaching staff. That’s viewed differently by every individual. That’s up to them and how they see things. As far as improvement goes, I feel like everybody gets a little better week by week. Playing a 10-game SEC schedule, it’s very hard to keep your body, what you feel like is tip-top shape. Keep all the bumps and bruises away. That’s when guys just got to take it on their own, get extra treatment, do what they need to do to feel healthy. I feel like everybody improves every week just because the more reps you get the more you’re going to learn it and the better you’re going to be.”

This is also the Bulldogs’ second weekly honor this season with punter Jake Camarda earning Special Teams Player of the Week honors for his performance in the win over Arkansas.