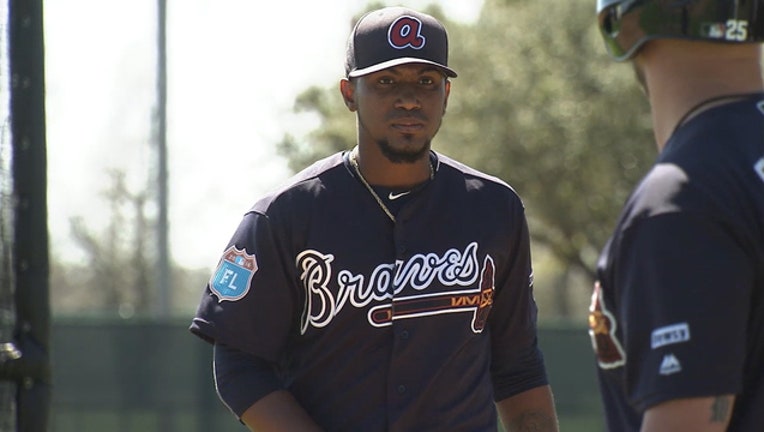 Julio Teheran tossed a one-hit masterpiece and did not allow any other baserunners, pitching the Atlanta Braves to a 6-0 victory Sunday that capped their surprising three-game sweep of the scuffling New York Mets.

"It was pretty exciting," Teheran said. "Everything was working."

Freddie Freeman matched his career high with four hits and the Braves finally mustered some offense for Teheran (3-7), who yielded only Michael Conforto's clean single leading off the third inning.

Conforto never advanced beyond first, and Teheran dominated New York the rest of the afternoon, ruining Jacob deGrom's birthday as a Father's Day crowd of 41,576 booed the home team repeatedly.

Nick Markakis homered and drove in two runs for Atlanta, which has won five straight for the first time since the first five games of last season.

"It's been a bit of a grind," Freeman said. "It's definitely a big boost for not only us, but everybody in this organization. It's just nice to see that some things are finally starting to come together and we're all clicking on all cylinders for the first time in a long time.

"I hope we can build off of this. You know, you've got to take this and hopefully run with it. We haven't done this in a while," he added.

The only bad news for the Braves was speedy outfielder Mallex Smith breaking his left thumb when he was hit by Antonio Bastardo's pitch in the seventh. With his left arm in a sling, Smith said he was headed back to Atlanta to see the doctor Monday and had no idea how long he'll be out.

Atlanta (23-46) arrived at Citi Field this weekend with the worst record in the majors, but played with much more energy and focus than the defending NL champions. A pair of former Mets farmhands earned the wins in the initial two games of the series, and Teheran sent Atlanta to its first sweep at Citi Field since September 2012.

"You don't want to panic early but, right now, with what's going on, we are going to shake some things up," New York manager Terry Collins said. "We've got to start playing better."

Teheran struck out seven and retired his final 21 batters, lowering his ERA to 2.66 while posting Atlanta's first complete game this season. The 25-year-old right-hander from Colombia threw a season-high 120 pitches, 82 for strikes, in his third major league shutout and fifth complete game. All the others came in 2014, when he was an All-Star.

Mixing 93-94 mph fastballs with 71-72 mph curves, Teheran completely shut down the Mets. He helped himself at the plate, too, with a pair of sacrifice bunts and a single — all of which contributed to Atlanta runs.

"It was an incredible game," Freeman said. "He was phenomenal."

In a matchup of quality starters getting little help from their teammates lately, deGrom (3-4) remained winless since April 30. He lost his third consecutive outing and fell to 0-4 in nine starts since winning his first three of the season.

Pitching on his 28th birthday and as a dad on Father's Day for the first time, deGrom gave up three runs and five hits in six innings. The 2014 NL Rookie of the Year struck out six and walked one.

Freeman went 7 for 13 in the series and is batting .548 (17 for 31) with three homers, five doubles, a triple, eight RBIs and six runs in seven games since last Monday. He had at least three hits in five of those games.

It was Atlanta's fourth shutout this season, including a combined one-hitter by Matt Wisler (eight innings) and Arodys Vizcaino on May 3 at Citi Field.

Fan favorite Wilmer Flores gave the crowd a rare reason to cheer when he tumbled onto the rolled-up tarp to make a tenuous catch of a foul popup. The third baseman wound up wedged between the tarp and a low retaining wall, but held onto the ball.

Braves: 3B Adonis Garcia (left ankle) was out of the starting lineup for the third consecutive day. He was replaced by Chase d'Arnaud, the brother of Mets catcher Travis d'Arnaud, who is close to returning from a strained rotator cuff.