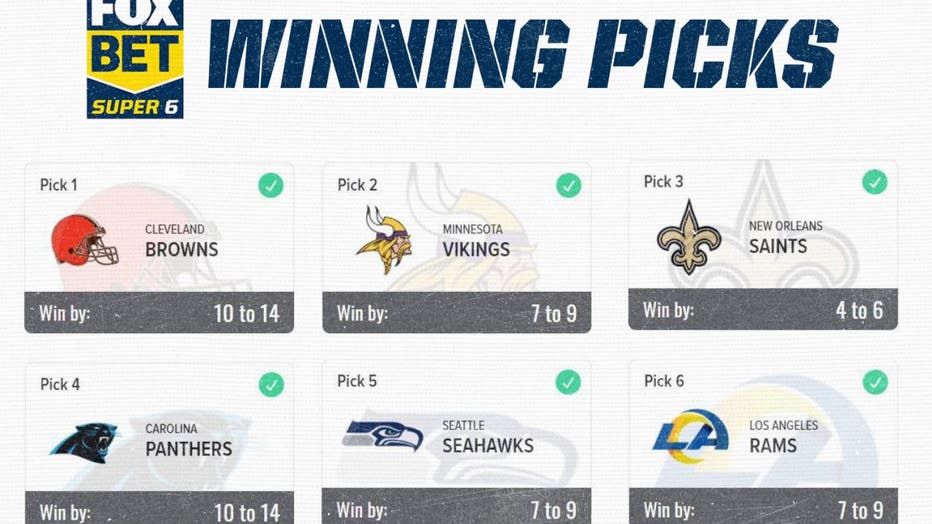 The lucky handicapper entered the late-afternoon games as the only player to go five-for-five in Super 6 selections, needing the Los Angeles Rams to beat the New York Giants by seven to nine points.

Our picker was sweating late, as Daniel Jones drove deep into Rams' territory in the final minutes, but he tossed an interception at the 5-yard line with 52 seconds remaining to seal LA's 17-9 victory.

The perfect entry also featured a bold call on Cleveland to beat Dallas by 10-14 points, as the Browns were 3.5-point underdogs heading into Big D.

A mere 3 percent of players made the same play on the Browns with that winning margin, and as the saying goes, high risk reaps high reward.

Upsets were the winner's calling card, as the bettor selected the Panthers to improve to .500 on the season, with a 31-21 victory over Arizona.

The Cardinals were 3-point favorites, but with Arizona coming off a surprsing loss to the Lions last week, this player liked Carolina's odds. A mere 2 percent of contest entries picked Carolina to win by 10-14 points.

Meanwhile, one team had to come out victorious in the Texans and Vikings matchup, as both were winless on the season. The bettor preferred Minnesota, even though the Texas were favored by 3.5.

The bettor did select some favorites, though, too.

The Seahawks were favored by 5.5, and with Russell Wilson breaking records left and right this season, the picker trusted Russ, which paid off in Seattle's 31-23 victory in Miami.

The perfect entry also included a bet on New Orleans (-3), which came through as the Saints scored five straight TDs after falling into an early hole at Detroit.

Next week, this could be you! Make sure to enter the NFL Challenge contest on the FOX Super 6 app for free and you can win the next $100,000 jackpot!