SNELLVILLE, Ga. - South Gwinnett athletic director Jeff Taylor confirmed to FOX 5 Sports that the school has shut down all football activities until July 27 due to a positive COVID-19 test from one of its players.

"We definitely have one positive and one suspected and we felt comfortable making this decision to protect our kids," Taylor said.

According to Taylor, even though the Comets have been strictly enforcing the protocols enacted by Gwinnett County and the GHSA, there is no way to ensure a player is safe from the virus.

"For that positive test, when they checked in with us they screened ok-everything was fine. It wasn't until after practice, later on, when the kid was with his parents that he started exhibiting some symptoms," Taylor said.

Taylor cited HIPAA laws and could not confirm if the student in question was successfully recovering from the symptoms.

Earlier Monday, the Gwinnett County School Board reversed its decision on a hybrid model and decided to start the school year using an all virtual platform. Football teams have been phasing in conditioning and on-field preparation since June and today were allowed to use helmets for the first time.

Meadowcreek head coach Jason Carrera put his Mustangs through an early morning practice. He acknowledged that positive tests, like the one discovered at South Gwinnett, could make it difficult to execute a full schedule of games if those tests occur in a season. Meadowcreek is scheduled to open at home against Eagle's Landing on August 21st. 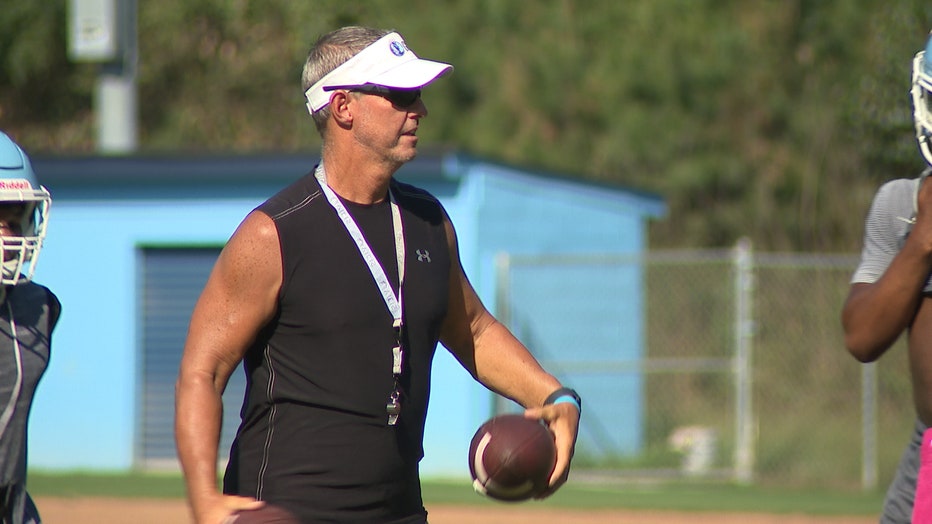 "We know that's a reality," said Carrera. "If you go into the season with a proper mindset that, you know, 'I may miss a guy during the week because of sickness in the school,' or whatever that might be, or the team we're playing may have those situations. We know we're going to face it. It's all going to be adversity and how we adjust to that. Control what we can control. We can control our preparation, we can control how hard we work out there. We can't control whether or not somebody plays or a student gets it or whatever. Let's just move forward and keep rolling."

South Gwinnett took extra steps to make sure their players stayed safe. The positive test underscored the difficulties involved with managing COVID-19 and its spread.

"Throughout this whole process, we've shown an abundance of care. We even actually took a week off to check the pulse and see what's going on-did we have any kids showing up with any symptoms?" Taylor said. "Everyone has wins and losses, but our main goal is to protect our kids, prepare them physically and mentally and give them a good education, and move them on to college. So, in the end, I think this shut down for a few days is going to work and is going to be positive and we're just going to keep the season as it is because every school is in the same situation...Gwinnett County School System prepared us with a return to conditioning plan that really set the expectations as to what we had to do coming back."

Taylor said that the team's early focus on conditioning should be adequate preparation for South Gwinnett's opening game slated for August 21st against North Paulding.