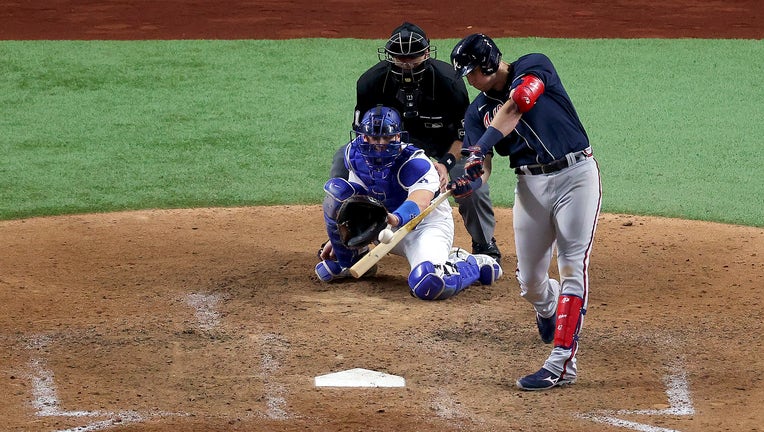 Austin Riley #27 of the Atlanta Braves hits a solo home run against the Los Angeles Dodgers during the ninth inning in Game One of the National League Championship Series at Globe Life Field on October 12, 2020 in Arlington, Texas. (Photo by Ron Jenk

ARLINGTON, Texas - Austin Riley led off the ninth inning with a tiebreaking homer that sparked a four-run outburst, and the Atlanta Braves opened their first National League Championship Series since 2001 with a 5-1 win over the Los Angeles Dodgers on Monday night.

Riley, the No. 9 batter in the Braves lineup, hit a 448-drive to left-center off Blake Treinen, who had just entered the game, drawing a loud reaction and some tomahawk-chop chants from the first fans allowed to attend a major league game this season.

The Braves weren’t done after Riley’s homer made it 2-1. Ronald Acuña Jr. followed with a double and scored on a single by Marcell Ozuna that chased Treinen before Ozzie Albies’ two-run homer off Jake McGee.

In a matchup of teams that ranked 1-2 in the majors during the regular season for both runs and homers, and in the first NLCS opener since 2007 with both teams undefeated in the postseason, the Braves had another impressive pitching performance even without a shutout.

Will Smith, the third Braves pitcher, worked a perfect eighth before Mark Melancon closed it out. Atlanta has allowed a total of six runs while winning all six of its playoff games.

Before the ninth, the only runs had been a pair of solo homers. Freddie Freeman went deep for Atlanta in the first and Kiké Hernández led off the Dodgers fifth with a homer.

It was the first time since March 12, the day spring training was suspended because of the coronavirus, there were fans in the stands for an MLB game.

All 10,700 tickets available to the general public were sold, in addition to another 800 or so utilized by the league and teams. That was about 28% of the 40,518 capacity at the new Texas Rangers ballpark where the retractable roof was open for the first NLCS game played at a neutral site.

The Braves had the bases loaded in the eighth after reliever Dustin May hit pinch-hitter Pablo Sandoval with a pitch. Victor Gonzalez came on and struck out pinch-hitter Charlie Culberson, punctuating the inning-ending out with an emphatic fist pump on the way back to the dugout.

Dodgers starter Walker Buehler pitched past the fourth inning for the first time in his three playoff series openers this fall, while apparently now dealing with blisters on both his middle and index fingers and with his seemingly tight pants trending on Twitter.

Buehler struck out seven in his five-plus innings, joining Hall of Famer pitcher Randy Johnson as the only ones with at least seven strikeouts in nine consecutive postseason starts — coming in the first nine for Buehler. He also walked five, a career high in a regular-season or playoff game.

Max Fried had nine strikeouts and two walks while allowing one run over six innings in his start, two years after pitching in relief for the Braves in every game of the 2018 NL Division Series when they lost to Los Angeles in four games.

The left-hander was born in Santa Monica, went to high school in Los Angeles and was the seventh overall pick by the San Diego Padres in 2012, two years before he got traded to Atlanta. 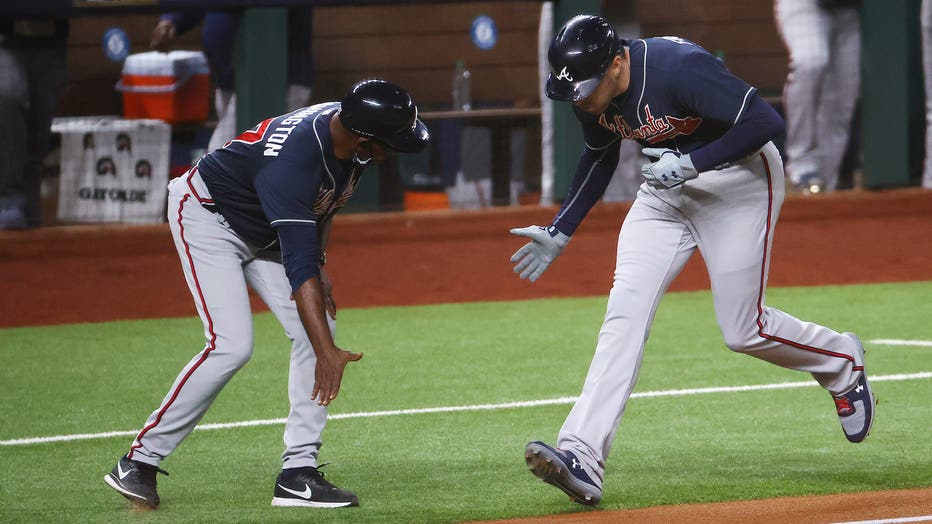 There were chants of “M-V-P! M-V-P!” when Freeman homered in the top of the first — a 429-foot solo shot to right that landed among fans well beyond the roped-off first five rows closest to the field. It was his first homer this postseason.

While the Braves had the five walks against Buehler, they didn’t have another hit until consecutive singles opening the sixth that chased the starter. Busdar Graterol got pot of the jam with a popout, strikeout and comebacker.

Hernández got his first start this postseason with the Braves starting a lefty, and tied the game 1-1 when he pulled a homer to left leading off the fifth. Hernández, 0 for 6 in the playoffs until then, was the first player to homer on a curveball by Fried since Bryce Harper on Sept. 10, 2019.

Fried induced 14 swings and misses, his second-most in any game this season — including his 11 starts in the regular season when he was 7-0 with a 2.25 ERA.

Braves: LF Adam Duvall left in the middle of his at-bat in the second inning because of an oblique issue. Duvall was in obvious pain after fouling off a pitch, then had his hand on his left side. Cristian Pache took over with a 1-2 count and drew a walk.

It was the fourth time overall that both teams entered Game 1 of the NLCS without a postseason loss. That has happened three times in the ALCS, all in the past 11 years. ... With starters Buehler and Fried both 26, it was only the seventh league championship series opener with two pitchers 26 and younger. The last was Game 1 of the 2012 NLCS, when Lance Lynn, who now calls the Texas ballpark home, started for St. Louis against San Francisco and Madison Bumgarner. ... This is the first NLCS matchup since 2010 with team from the NL West playing a team from the NL East.