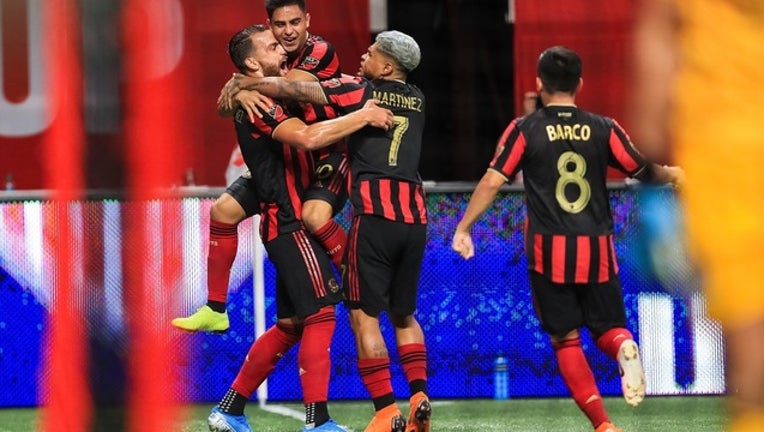 ATLANTA (AP) - Pity Martinez scored a goal and set up an own-goal by Minnesota with a nifty pass, leading short-handed Atlanta United to another trophy with a 2-1 victory in the final of the U.S. Open Cup on Tuesday night.

Atlanta finished the game with 10 players after Leandro Gonzalez Pirez received a red card, holding off Minnesota United's relentless pressure in the closing minutes. Michael Boxall had a chance to tie it but sent the ball over the crossbar with a shot from right in front.

In a matchup of teams that entered Major League Soccer together as expansion franchises in 2017, Atlanta United celebrated its third title in less than a year. They won the MLS Cup last December, and then added the Campeones Cup with a victory over Mexican champion Club América two weeks ago.

Now, Atlanta has its first title in the 105-year-old U.S. national competition, a victory that gives United a return trip to the CONCACAF Champions League in 2020.

Atlanta United becomes the first MLS team to qualify for the continental competition and joins five other teams that already claimed spots: América, UANL, Cruz Azul and León from Mexico's Liga MX, as well as Jamaican squad Portmore United. Ten spots are still to be determined, including four more teams from MLS.

In the 10th minute, Atlanta United jumped ahead after Martinez passed off to Gonzalez Pirez sprinting into the area on the right side. He tried to return it back in front, but the ball deflected off Chase Gasper and took a wild bounce over the head of leaping goalkeeper Vito Mannone, who couldn't quite reach it.

Atlanta added to its lead in the 16th. Justin Meram loped in off the left side, suddenly accelerated past a defender and passed in front to Martinez, who fired it past Mannone to give the home team a 2-0 lead.

It was a frustrating night for Atlanta star Josef Martinez, who has scored in an MLS record 12 straight games. He had two goals waved off by offside calls, had another chance thwarted by Mannone's diving save, and failed to control a pass that was delivered to him all alone in front of the goal.

After being dominated over the first 45 minutes, Minnesota United made a game of it.

Just over a minute into the second half, Kevin Molino passed into the area and Robin Lod was able to get it past keeper Brad Guzan with a side kick that caught the far post and ricocheted into the goal.

Cheered on by a small contingent of Loon supporters in the corner of Mercedes-Benz Stadium, Minnesota pressed for the tying goal. The visitors caught a huge break in the 74th when Gonzalez Pirez grabbed at a player breaking into the clear and received a red card.

But Atlanta United was able to hold on, setting up another trophy presentation.