ATLANTA - Lloyd Pierce sees improvement in each of the five players he calls the core of the rebuilding Atlanta Hawks.

There is pressure for the coach to deliver proof of that growth. Pierce says it's time for a young team led by Trae Young to become a winner.

Young averaged 29.6 points and 9.3 assists and earned the All-Star berth in only his second season. Young and John Collins give the team two young high-scoring starters and reason to hope a streak of three straight losing seasons will end.

"The excitement is the possibility of what they can become as they continue to grow together," Pierce said Tuesday. "I'm always focused on the big picture and it's really about getting those guys to all be a we team and to play together and for us to grow in the same way these guys have done individually."

Pierce said in April the Hawks "need to make a major jump next year." 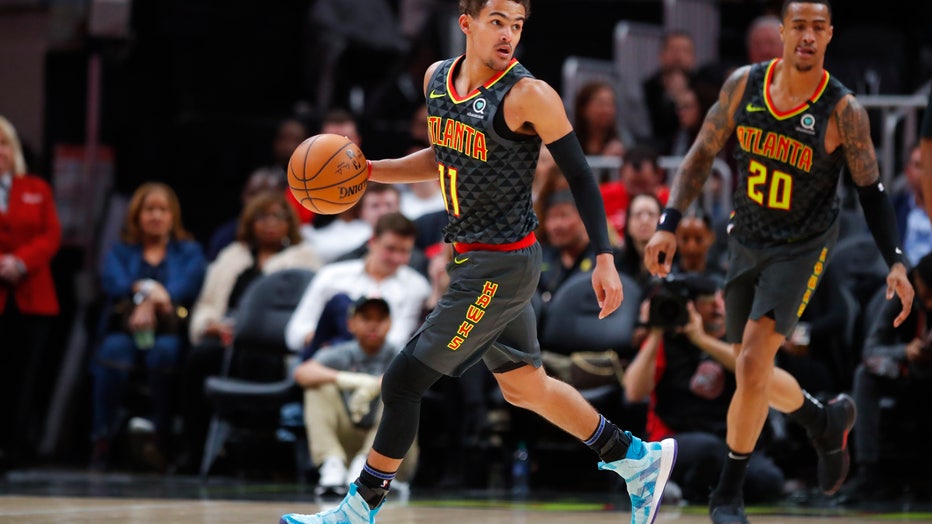 ATLANTA, GA - MARCH 09: Trae Young #11 of the Atlanta Hawks controls the ball during the first half of an NBA game against the Charlotte Hornets at State Farm Arena on March 9, 2020 in Atlanta, Georgia. NOTE TO USER: User expressly acknowledges and a

Atlanta's 20-47 record provided no proof of improvement. The Hawks finished in a virtual tie for last in the Eastern Conference, percentage points ahead of Cleveland.

The Hawks are one of eight teams who were excluded from the NBA's plan to complete the season.

Atlanta was eliminated from the playoffs before the season was suspended due to the coronavirus pandemic.

The team could face more than eight months away from meaningful competition. There is a concern the void could rob the core five -- Young, Collins, De'Andre Hunter, Cam Reddish and Kevin Huerter -- of court time that is essential to their development.

Pierce and Hawks general manager Travis Schlenk are lobbying for the bottom eight teams to conduct scrimmages against other teams. Schlenk says complications include negotiations with the players union and possibly excluding players entering free agency.

Schlenk said the possibility of an eight-month layoff is "obviously a concern. One of the most important things for our guys is to continue to play."

Without the approval of the team, Young played against current and former college players in a game in the Oklahoma City's Skinz League last week. When video of the game surfaced, it was used in the Hawks' case for the NBA to approve practices and scrimmages for the bottom eight teams.

"I think the beauty of it is we were able to see why this proposal is important," Pierce said. "Our guys want to play."

"No, we didn't know but I think it's educational for the league and it's part of the proposal," Pierce said. "Can we provide a safe environment for our players against other NBA players if we're able to monitor it, if only for a short while, so we can avoid that temptation."

Pierce said he used Young's game as a reminder for players "to stay patient as we put together a plan for them."

Atlanta's season was hurt by Collins' 25-game suspension without pay for a violation of the NBA's anti-drug program after testing positive for a growth hormone.

Collins was missed. The Hawks were 4-21 without the 6-foot-9 forward, who returned to average 21.6 points and a team-leading 10.1 rebounds.

Pierce said he was "ecstatic" about Collins' production. Pierce said the forward also had a "big jump defensively" in his third season.

The season's suspension delayed the Atlanta debut of center Clint Capela, who was acquired from Houston on Feb. 6. Capela, under contract for three more years, was recovering from a foot injury and was unable to immediately play following the trade.

Capela, 26, is viewed as another key to the Hawks' foundation. It may take time for Capela (6-10, 240) to find his niche in the pick-and-roll game that serves Young so well. And it may take time for Pierce to determine the right lineup mix with the new center.

That adjustment period now could be pushed to the start of next season.

"We would have loved to been able to get some game action with him the last 15 games or so," Schlenk said.

The Hawks say Capela is healthy and would participate in any team practices and scrimmage approved by the league this summer.

Schlenk says the Hawks wouldn't use a top-eight NBA draft pick to target a particular position but instead would take "the most impactful player." Jeff Teague is a free agent. If he is not re-signed, the Hawks will be looking for depth behind Young at point guard. Schlenk says depth also is needed at the wings and forward.

The draft date has not been announced.