Alabama finished the season No. 1 in the AP Top 25 for the 12th time, extending its record by completing the program's first perfect season since 2009.

The Crimson Tide were a unanimous No. 1 in the final poll, getting 61 first-place votes, after beating Ohio State 52-24 in the College Football Playoff championship game Monday night.

Alabama was the preseason No. 3, but when it started playing this strange season amid a pandemic in late September it moved up to No. 2. The Tide jumped to No. 1 in early November and finished as major college football's only undefeated team.

"We set this as a goal, to potentially be the greatest team to ever play," Tide quarterback Mac Jones said. "I think we made a valid statement in winning the national championship tonight."

The Buckeyes were second, followed by Clemson at No. 3. Texas A&M was fourth, finally passing Notre Dame for the Aggies' best finish in the AP poll since they won the national title in 1939. The Fighting Irish made the playoff but slipped to No. 5 after losing to Alabama in the semifinals. 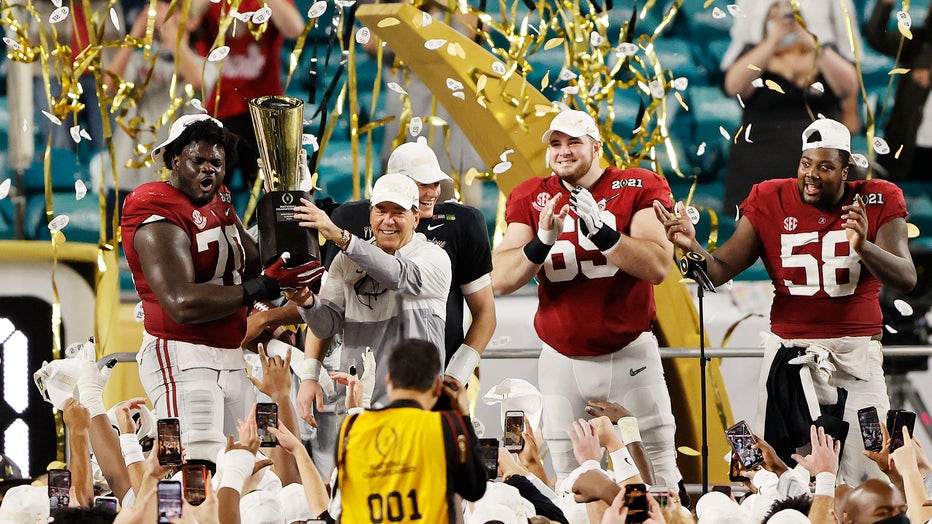 For the Crimson Tide, it is the sixth national title under coach Nick Saban in the last 12 seasons. No other team has won more than two during that time. With 12 AP titles overall -- Paul "Bear" Bryant was coach for five and Gene Stallings for one -- Alabama has four more than Notre Dame, in second place with eight.

The Tide, Aggies and Bulldogs give the Southeastern Conference three teams in the top seven. The SEC finished 7-2 in the bowls, counting Alabama's national championship victory.

Iowa State was No. 9, its best final ranking and only the third time the Cyclones have finished the season ranked. Northwestern finished 10th, the Wildcats' best final showing since they went to the Rose Bowl in 1995 and were eighth in the last poll.

The Big 12 finished with a perfect record in five bowl games. Oklahoma and Iowa State were joined by No. 19 Texas and No. 20 Oklahoma State in the final rankings from that conference.

The ACC's postseason was a dud at 0-6. Clemson, Notre Dame, No. 18 North Carolina and No. 22 Miami gave the ACC four ranked teams.

The odd season in a pandemic put a spotlight on teams outside the Power Five conferences as never before, and the final poll treated the upstarts well.

Cincinnati, the American Athletic Conference champ, was one of eight non-Power Five teams to land in the Top 25.

Independent BYU finished No. 11, the Cougars' best final ranking since they finished the 1995 season fifth.

Sun Belt rivals Coastal Carolina and Louisiana-Lafayette were Nos. 14 and 15, respectively. That conference had never finished with two ranked teams. Liberty, another independent, was 17th.

Rounding out the bottom of the poll were No. 23 Ball State, the Mid-American Conference champ, No. 24 San Jose State, the champ of the Mountain West, and No. 25 Buffalo, another MAC school.