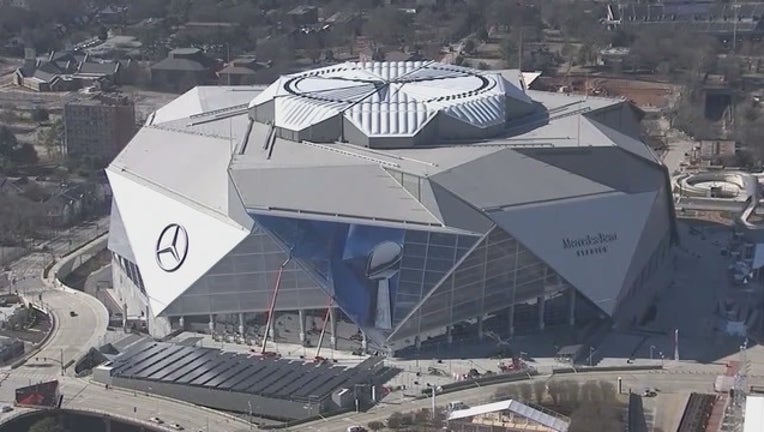 KANSAS CITY, Mo. (AP) - The New England Patriots are headed to their third straight Super Bowl, once more thanks to Tom Brady's brilliance.

The drive against an exhausted defense was reminiscent of when the Patriots beat Atlanta in the only Super Bowl to go to OT two years ago.

New England (13-5) benefited from two critical replay reviews and made its ninth Super Bowl with Brady at quarterback and Bill Belichick as coach.

Awaiting them in Atlanta are the Los Angeles Rams, who won 26-23 in overtime in New Orleans for the NFC championship. The Rams last made the Super Bowl in 2002 while based in St. Louis, losing to the Patriots.

Several times, the Patriots appeared to have it won, only to see Kansas City (13-5) come back in spectacular fashion.

Brady, at 41 already the oldest quarterback to have played in a Super Bowl, drove New England 65 yards in 1:24 to Burkhead's go-ahead 4-yard touchdown with 39 seconds left in regulation. That was enough, though, for his far younger counterpart, the 23-year-old Patrick Mahomes, to take the Chiefs 48 yards to Harrison Butker's 39-yard field goal with 8 seconds left to force overtime.

NEW ORLEANS (AP) - Greg Zuerlein kicked a 57-yard field goal in overtime and Los Angeles, helped by a huge missed call by the officials, advanced to the Super Bowl with a victory over New Orleans in the NFC championship game.

The stunning finish came after New Orleans got the ball first in the extra period. Under pressure, Drew Brees fluttered up a pass that was picked off by John Johnson III, who was able to hang on to the interception while falling onto his back.

Johnson hopped up and celebrated by doing with the "Choppa Style" dance popularized by New Orleans rapper Choppa, whose namesake song had become a Saints' rallying cry.

The Rams weren't able to do much offensively, but it didn't matter. Zuerlein, who had already delivered a tying 48-yard kick with 15 seconds left in regulation, booted through the winning field goal from just inside midfield with plenty of room to spare.

The Superdome, which had been in uproar all afternoon, suddenly turned eerily silent. It was the first home playoff loss for the Saints with Brees and coach Sean Payton, who and been 6-0 in those games since their pairing began in 2006.

The Rams (15-3) and their 32-year-old coach, Sean McVay, capped a remarkable rise since moving back to Los Angeles three years ago. The team will be appearing in its first Super Bowl since the 2001 season, when the "Greatest Show on Turf" was still in St. Louis.

It was another bitter end to the season for the Saints, who lost the previous season in the divisional round on the "Minnesota Miracle" - the Vikings' long touchdown pass on the final play of the game.

This time, New Orleans (14-4) squandered an early 13-0 lead and couldn't overcome a blown call in the closing minutes of regulation, when the officials failed to flag a blatant pass interference penalty on Los Angeles Nickell Robey-Coleman inside the 5.