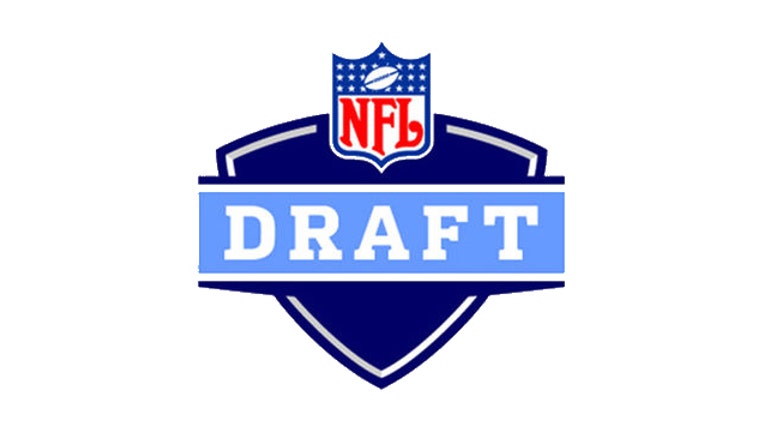 The players selected in the first round of the NFL draft Thursday night in Chicago:

Strengths: Quick release and maintains solid accuracy whether throwing short, intermediate or deep. Will stand and deliver in the face of pressure and moves well within the pocket.

Weaknesses: Toughness is admirable, but he takes too many hits. He fumbled 24 times in three seasons. Some of that is poor recognition of when to get rid of the ball. Played almost exclusively from the shotgun.

Notable: Led the Bison to FCS national championship in his only two seasons as a starter. First FCS quarterback to be drafted in first round since Joe Flacco of Delaware (2008), though Flacco was a transfer from Pittsburgh. Before that Steve McNair from Alcorn State went No. 3 in 1995.

Strengths: Ideal size, strong arm and above average athleticism. Physically, he is everything an NFL team wants a quarterback to be. Played under center a lot in NDSU's offense. At the combine, Wentz impressed teams with his confident demeanor and understanding of the game.

Weaknesses: He hasn't faced big-time competition. Can all the tools translate and improve when he does?

Notable: Sacks dropped off from 13 1-2 in 2014 to five last season, but still played at an All-America level. Earliest an Ohio State player has been drafted since Orlando Pace went No. 1 in 1997.

Strengths: Rarely takes a play at less than max effort. Fast and strong hands keep blockers from locking him up.

Weaknesses: Lacks that explosive first-step speed that many elite edge rushers have.

Notable: Big Ten offensive player of the year in 2015. Second straight Buckeyes player. First time since 1997 (Orlando Pace at No. 1 and Shawn Springs at No. 3) two Ohio State players were picked in the top five.

Strengths: Finds and hits holes with exceptional quickness and aggressiveness. Always seems to fall forward. Excellent blocker and solid pass catcher, which should make him a good fit in today's pass-happy NFL.

Weaknesses: Carried a heavy load the last couple of seasons and his style lent itself to taking some big shots.

Notable: Started three years for the Seminoles, each season in a different secondary spot. Fourth straight season a Florida State player has been selected in the first round.

Strengths: If you could engineer a defensive back, Ramsey would be it. Size, speed and athleticism are all ideal. Played cornerback and safety and was used as a hybrid, playing almost like a linebacker. Excelled at all of it.

Weaknesses: The technique and skills that make for a lock-down cornerback need work. But that might not be the way he is used in the NFL.

Strengths: Uses his long arms to keep rushers at bay and sets his feet quickly. Plays with some nastiness.

Strengths: More power and quickness than speed. Perfect size, quick off the snap, relentless and can wreck a running game.

Weaknesses: Tends to stand straight up, which negates his power.

8. Tennessee (From Cleveland through Miami through Philadelphia)

Strengths: Tough and strong. All you need to know about Conklin: more than held his own against Oregon (DeForest Buckner), Ohio State (Joey Bosa) and Alabama (A'Shawn Robinson, Jarran Reed, et al).

Weaknesses: Not a top-tier athlete and could have some issues with speed rushers.

Notable: Led Georgia in sacks each of the last three seasons. First Georgia defensive player drafted in the top 10 since DT Johnathan Sullivan in 2003.

Strengths: Long, elusive and fast off the edge and in pursuit.

Weaknesses: Not much bulk could lead him to get knocked around at the next level.

Notable: Interceptions dropped from three as a sophomore to one as a junior as opponents began to shy away. For the first time since 2010 (Oklahoma), three players from one school go in the top 10.

Strengths: Height and long arms, plus good speed, make for an ideal package for NFL cornerback.

Weaknesses: Tends to grab in coverage if he thinks he is getting beat.

Notable: First team All-SEC each of his three seasons with the Gators. First cornerback drafted by Bucs in first round since 2008 (Aqib Talib).

Strengths: Changes directions quickly, and has skills, athleticism and attitude to be a shutdown cornerback.

Weaknesses: Small frame could be a problem against big receivers and gets a little too aggressive at times.

Notable: Had 14 sacks playing on the interior for the Cardinals. Third straight year a Louisville players has been picked in first round.

Strengths: Gets off the ball very fast. Often blockers simply can't get to him. Very productive.

Weaknesses: Short and some questions about whether he can stand up to the power of NFL linemen.

Notable: Missed most of last season due to an NCAA infraction, but played at top form when he did. Slipped because of some off field issues and possible character concerns.

Strengths: Quick feet and hands help him neutralize speed rushers. Reads and anticipates rush moves. Moves well and can wipe out linebackers on the second level.

Weaknesses: Point of attack power run blocking needs some work. Maybe a little bulk would help, but a case could be made that he was the best player available.

Notable: Was having an All-America-type season until he hurt his knee in practice during the second month of the season. First West Virginia defensive back selected in the first round since Adam "Pacman" Jones in 2005.

Strengths: Plays with fierce aggressiveness. Big hitter with knack for getting his hands on the ball.

Weaknesses: The knee could be a problem, plus he plays like he is 30 pounds heavier than he is.

15. Cleveland (from Tennessee from Los Angeles)

Strengths: Great acceleration off the line makes him a top-notch deep threat. Elusive after the catch, too.

Weaknesses: At his best on the perimeter. Needs to show more consistency in the middle of the field as a pass catcher and route runner.

Strengths: Tough and powerful. Drives opponents off the line. Ohio State now at four first-rounders. Record is six by Miami in 2004.

Weaknesses: Could use better footwork, especially in pass protection. Maybe more of a right tackle than left?

Strengths: No safety in this draft hits harder, plus he has the athleticism to be effective in coverage.

Weaknesses: Head-to-head matchups against athletic players could cause some issues. Not much to dislike.

Notable: All-American last season who had 25 1-2 tackles for loss. Fourth straight season Clemson has had a first-round pick.

Weaknesses: Doesn't have elite speed off the edge.

Notable: Former high school quarterback turned ultra-athletic linebacker. The last linebacker taken in the first round by the Jets was Vernon Gholston of Ohio State at No. 6 overall. Gholston was more of a defensive end.

Strengths: Skill set is similar to Myles Jack. Fast and flexible player who excels in space. Could be used as a hybrid safety/linebacker.

Weaknesses: Undersized and an inconsistent tackler.

Notable: Had 2,354 yards and 29 touchdown catches in last two seasons. First time since 2012 Notre Dame has had two first-round picks.

Strengths: Home-run hitter and classic deep threat with 4.4 speed. Can cut near top speed and gets a good release off the line of scrimmage.

Weakness: Inconsistent hands and slight frame could limit the way he is used in the NFL.

Notable: A wrist injury cut short his senior season, but he was still an All-American. Transferred from Wyoming. First receiver drafted in the first round by Washington since Rod Gardner in 2001.

Weaknesses: Could use more bulk on his frame and strength to deal with physical coverage.

Notable: Returned last year from a horrific leg injury in 2014 and put up big numbers: 82 catches for 1,153 yards and 11 touchdowns. First time since 2009 two Ole Miss players went in the first round.

Strengths: Big and strong and uses his frame well to shield off defenders. Makes a lot of contested catches.

Weaknesses: Doesn't have great speed — 4.6 in the 40-yard dash at the combine — and can get tangled when pressed at the line of scrimmage.

Notable: Had 23 pass break-ups last season to lead the nation. Fourth time since 2007 the Bengals have picked a cornerback in the first round.

Weaknesses: Strength to stand up to big receivers could be an issue.

Notable: Had six interceptions last season as a junior and was one of the Atlantic Coast Conference's best cornerbacks. After six-year first-round pick drought for Miami, this is the second straight year the Hurricanes have had a first-rounder.

Weaknesses: Better athlete than technician. Makes big plays. Gives up some, too.

Notable: Passed for 386 yards and three touchdowns, leading Memphis last season to a win over Mississippi — a team with several NFL players on its defense. Last three quarterbacks taken in the first round by Denver: Tim Tebow, Jay Cutler and Tommy Maddox.

Strengths: Can really move for his size. Good arm strength. Cut way down on his interceptions last year, from 19 his first two seasons as a starter to four.

Weaknesses: Needs to improve reading defenses and anticipating throws. Throws can get off-target, especially when on the move, which detracts from his excellent mobility.

Notable: All-Pac-12 last season with 75 tackles and six sacks. Also knocked down five passes at the line. Drafted ahead of teammate Myles Jack, the talented linebacker coming off a knee injury.

Strengths: Powerful player who can play on the nose. Reads plays well and can push back a pocket.

Weaknesses: Not many pass rush moves and not particularly quick.

Weaknesses: Pure guard with athletic limitations when it comes to pulling and quickness.

Notable: Off-the-field issues and character questions, along with tantalizing talent. Third Ole Miss player taken in the first round, all from the same recruiting class.

Strengths: Rock solid for close to 300 pounds. Good quickness and speed. Was the consensus No. 1 recruit coming out of high school.

Weaknesses. The production comes and goes. Had 6 1-2 sacks in three seasons.

Notable: First-team all-Conference USA last season. Had 23.5 tackles for loss in his last two seasons. Last Louisiana Tech player drafted in the first round was receiver Troy Edwards in 1999.

Strengths: Big and athletic and can control double teams with strong hands. Stays with plays and runs down ball carriers from behind.

Weaknesses: Production and consistency did not always match talent.

Notable: Three-year starter who began his career at guard. Fourth straight year a Texas A&M offensive lineman was selected in the first round.

Strengths: Massive and versatile. Once he locks up a defender, the defender usually is blocked.

Weaknesses: Despite size, run blocking could use some work. Doesn't drive holes open.