The Georgia Bulldogs are trying to stay healthy and stay in shape ahead of the Orange Bowl.

Line: Georgia by 7 1/2, according to FanDuel Sportsbook.

A spot in the national championship game, but the Wolverines and Bulldogs have taken different paths. Georgia has been ranked in the top five all season, and was the unanimous No, 1 team in the country for about two months. In a breakthrough season for coach Jim Harbaugh, Michigan became the first team to start a season unranked and reach the playoff.

Georgia’s interior defensive line vs. Michigan’s interior offensive line. Massive NG Jordan Davis (6-foot-6, 340 pounds) anchors the line and gets a lot of help from DTs Devonte Wyatt and Jalen Carter. The Bulldogs allow just 2.61 yards per rush and have given up only three rushing touchdowns, fewest in the nation. Michigan won the Joe Moore Award, given to the top offensive line in the nation. The group, led by C Andrew Vastardis, has been better than the sum of the parts, paving the way for Michigan to run for 223 yards per game and 39 touchdowns.

Miami is looking more like Athens as fans flock down south to cheer on the Georgia Bulldogs in the Orange Bowl.

Georgia: TE Brock Bowers. The freshman has become the Bulldogs’ most dynamic receiver, leading the team in catches (47), yards receiving (791) and touchdowns (11). 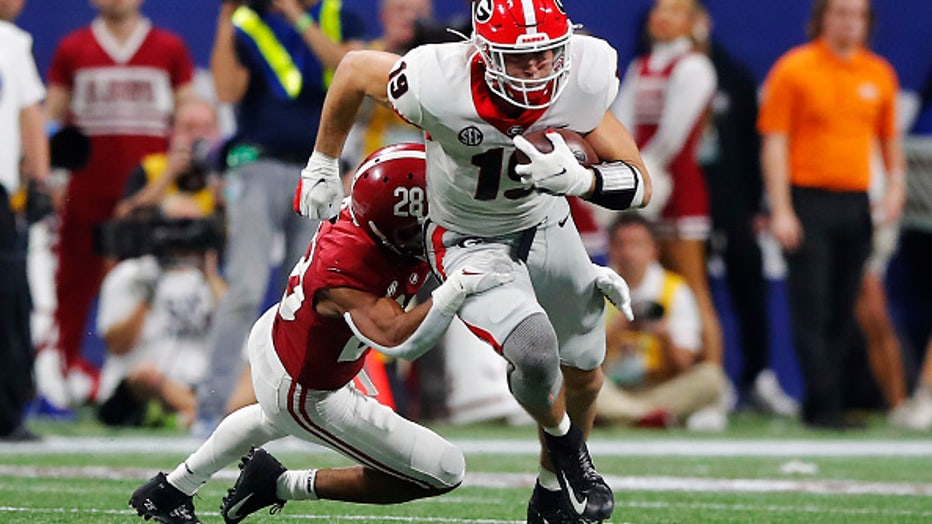 ATLANTA, GEORGIA - DECEMBER 04: Brock Bowers #19 of the Georgia Bulldogs is tackled by Josh Jobe #28 of the Alabama Crimson Tide during the third quarter of the SEC Championship game against the at Mercedes-Benz Stadium on December 04, 2021 in Atlant

Michigan: DE Aidan Hutchinson. The Heisman Trophy runner-up has been a game-wrecker with 14 sacks.

Former walk-on Stetson Bennett is still Georgia ’s starting QB despite a rough outing in the Southeastern Conference title game loss to Alabama. Bennett took over early in the season after JT Daniels was injured and never relinquished the job, throwing 24 touchdown passes and seven interceptions. ... Michigan has used two quarterbacks all season. Cade McNamara takes the vast majority of the snaps, but highly touted freshman J.J. McCarthy gets used a few times per game, often to take advantage of his mobility. ... Georgia is making its second playoff appearance under coach Kirby Smart. The Bulldogs won a semifinal at the Rose Bowl in overtime before losing the 2017 national title game in OT to Alabama. ... Michigan is making its first playoff appearance after winning the Big Ten for the first time since 2004. ... Georgia is No. 1 in the country in scoring defense at 9.5 points allowed per game. Michigan is fourth at 16.1.