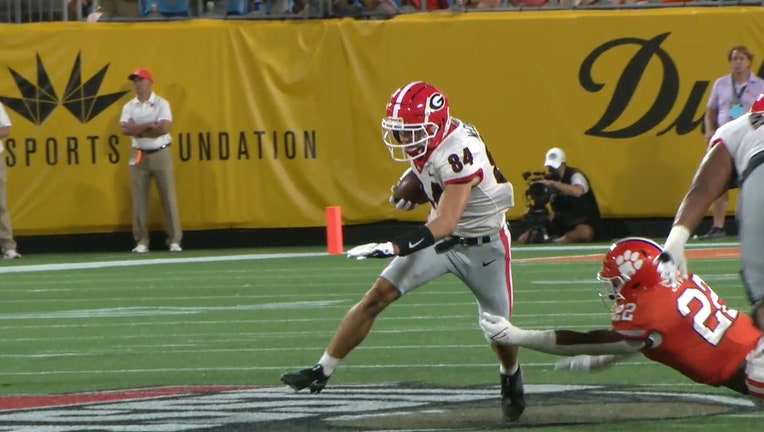 Georgia receiver Ladd McConkey made a lasting impression on his hometown

CHATSWORTH - One of Georgia's breakout stars during their undefeated regular season is used to overcoming doubters. That includes the smaller-school coaches trying to recruit him before powerhouse schools like UGA started showing interest.

"The funny thing is, a lot of these 1AA schools, they heard Georgia's recruiting him, they said, 'is he really going to Georgia? He'll never get to play!'" said North Murray High School football coach Preston Poag. "I said, 'well ... ok.'"

Former Mountaineers star Ladd McConkey played for Poag at North Murray, where as a senior quarterback he led the team to their first ever state quarterfinals appearance in 2019. He was also a standout basketball player and track athlete.

McConkey, however, didn't arrive on campus and immediately become the big fish in the pond.

"He was the smallest guy on the team!" said Poag with a smile. "If you looked at our team photo, you'd think he was in 7th grade."

Poag pointed out, McConkey got bigger, and his play did the big talking. But, through North Murray's season, the only scholarship offers were coming from smaller schools (he also got interest from some colleges to play basketball, according to his coach in that sport).

In January, however, things changed. The very first powerhouse school to show interest was UGA, and you could say they put on the full court press when head coach Kirby Smart showed up to watch McConkey at one of North Murray's basketball games.

"Yeah, well, that was an interesting night," said North Murray basketball coach Tim Ellis. "There was not a lot of focus [from the players]."

Principal Maria Bradley sat next to Smart in the stands, singing McConkey's praises.

"We tried to make it like a secret he was coming so we didn't have an overwhelming crowd coming from everywhere," said Bradley.

Other schools followed UGA's lead and started showing more interest, but McConkey -- a longtime Tennessee fan because of family ties to that SEC rival -- decided on UGA. If the commitment from a three-star recruit flew under the radar at the time, McConkey's play would not for long.

As a redshirt freshman in 2021, McConkey made the most of his opportunities: his 26 catches, 395 receiving yards and 4 receiving touchdowns are all second (or in the case of touchdowns, tied for second) on the team. He's also been a special teams contributor, including as a punt returner.

Despite an increased profile, those close to McConkey say no amount of attention or accolades have gone to his head.

"You'd never know," said Poag. "He doesn't act any different than when he played here at North Murray. He's a yes sir, no sir type guy. You wouldn't know if he played against Tennessee or against Murray County. Just the type of guy he is."

The North Murray High School community is celebrating their hometown star as he gets ready for the SEC Championship, with students and teachers dressing up in Dawgs gear on Friday.

"He wasn't a student that was all about him," said Bradley, the school principal. "He cared about his team and the school. He put a lot of pressure on himself, but it wasn't all about him."

Ellis, McConkey's basketball coach and a diehard Georgia fan, can't wait for this weekend's big game and seeing his former player in the college football playoffs.

"Seeing how hard he worked this whole time to get ... basically to get paid some respect," said Ellis. "It's just pride."

McConkey is listed by UGA as 6'0, 185 pounds, still somewhat undersized for a major college football receiver; but his biggest fans say that's never held him back before, and certainly won't in the future.