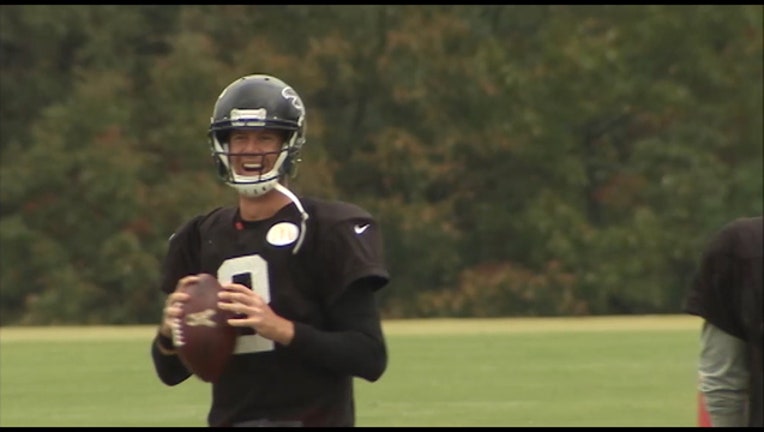 FLOWERY BRANCH -- The Falcons are 6-1. Their offense is 5th in the NFL in yards per game and the team scores the fourth most points in the league. Still, something seems not quite right with Atlanta's offense and 3-time Pro Bowl quarterback Matt Ryan.

"Do I feel like my best football is in front of me? Absolutely," said Ryan. "I don't feel like I'm playing my best."

Ryan points first to turnovers: after throwing just two interceptions in the team's first four games (both coming in the season opener), he's been picked off four times in the last three games.

"We have great confidence for [Ryan] to put the ball exactly where he wants," said head coach Dan Quinn. The thing we're going to work like crazy to improve is our turnovers for our entire team."

Ryan's statistics are down in some areas from past seasons -- though Dan Quinn noted comparing statistics from one season to another after offensive schemes have changed isn't always fair. Still, Ryan's quarterback rating of 88.9 is lower than any full season since 2009. His 9 touchdown passes through 7 games put him on pace for 20.6 for the season which would be his lowest total since having 16 touchdown passes in 2008, his rookie season.

On a positive statistical side, Ryan is on pace for his fewest interceptions since 2011. He's also currently 6th in the NFL in passing yards per game.

Still, there are questions about Ryan's season, especially after the offense struggled in a loss at New Orleans and a close win against Tennessee. Ryan says he's "fine" physically and is constantly working to improve his mechanics. He knows there's criticism about his play and is just fine with that.

"It's part of the deal, it's part of playing this position," said Ryan. "It's not something I shy away from. It doesn't affect the way I prepare or my confidence."

Like their head coach, Ryan's teammates have complete confidence in their veteran signal-caller.

"I'm not concerned at all [about the offense]," said running back Devonta Freeman, asked about the offense in general having some problems. "It's just all us, a matter of everybody getting on the same page and doing what we do best."

Fullback Patrick DiMarco says Ryan's calm and cool as ever, adding if the team is 6-1 with an offense not totally clicking, imagine what they can do when everything runs perfectly.