AUGUSTA, Ga. - The wind roaring through the Georgia pines gave Tiger Woods and so many others all they could handle Friday in the Masters.

And then Scottie Scheffler made it feel even tougher.

In his debut as the new No. 1 player in the world, Scheffler looked the part. He was bogey-free over the final 15 holes for a 5-under 67, tying the Masters record by building a five-shot lead going into the weekend.

Only four other players in Masters history have led by five shots after 36 holes, most recently Jordan Spieth in 2015. All of them went on to win.

"I put myself in position, where I’m in position to win this golf tournament. I couldn’t ask for anything more after 36 holes," Scheffler said. "My game feels like it’s in a good spot. I’ve just got to keep doing what I’m doing and not overthink things."

Scheffler, the 25-year-old Texas Longhorn, has won three of his last five starts on the PGA Tour and doesn’t appear to be overwhelmed by the stage of Augusta National.

Woods was nine shots behind, a daunting task even on two good legs.

Despite four bogeys after five holes, Woods patched together a 74 and made it to the weekend in his first 72-hole event since the November 2020 Masters. 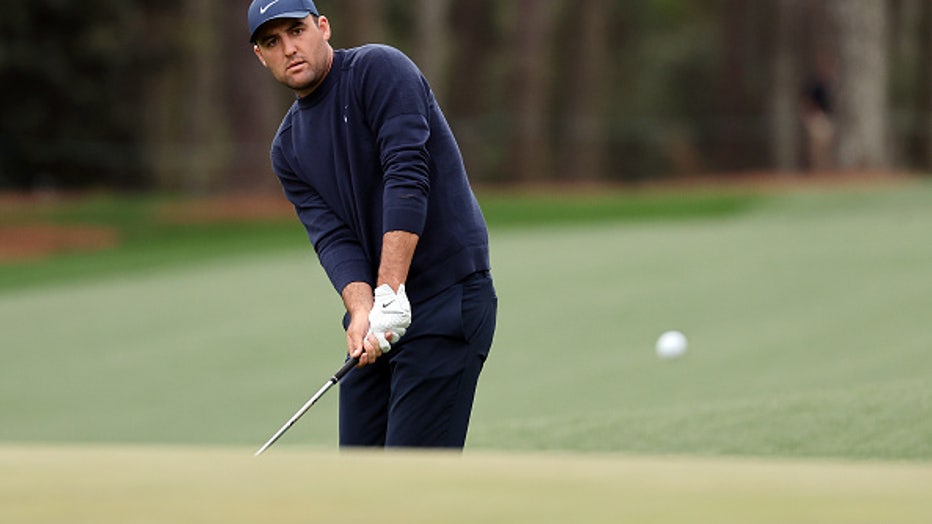 AUGUSTA, GEORGIA - APRIL 08: Scottie Scheffler plays his shot on the 14th hole during the second round of The Masters at Augusta National Golf Club on April 08, 2022 in Augusta, Georgia. (Photo by Gregory Shamus/Getty Images)

Former Masters champion Dustin Johnson (73) led a group at 2-under 142, while the bunch another shot behind included two-time major champion Collin Morikawa and former PGA champion Justin Thomas, whose 67 matched Scheffler for low round of the day.

Two hours after the start of a glorious and calm spring day in Augusta, the wind arrived with a blast and players held on for dear life. Scheffler could see sand blow out of the bunkers. Flags were ripping. Scores were soaring.

"Felt like I went 10 rounds with Canelo," Sergio Garcia said of champion fighter Canelo Alvarez. That was after a hard-earned 74.

Scheffler had no such troubles, even if it didn’t feel that way.

"Definitely felt like I was in a fight today," Scheffler said.

Scheffler got his mistakes out of he way early and began to seize control with two birdies right before making the turn. After a tough par save from right of the 11th green, he added two birdies from 12 feet on the par-3 12th and a tough pitch from well right on the par-5 13th.

By then, the wind began to subside in the late afternoon and Scheffler began to pull away with two more birdies that made him a clear and difficult target on the weekend.

And to think only two months ago he still didn’t have a PGA Tour victory.

Woods made it through another hike along the undulating terrain of Augusta National, his limp more noticeable from a right leg held together with rods and screws from his car crash 14 months ago.

RELATED: Tiger Woods: A look at the long road back to the Masters following car crash

"I don’t feel as good as I would like to feel," Woods said with a smile. "That’s OK. As I said, I’ve got a chance going into the weekend. Hopefully, I’ll have one of those light bulb moments and turn it on in the weekend and get it done."

His putter wasn’t helping any. All the key putts Woods made in the opening round weren’t falling Friday as he piled up four bogeys in his opening five holes, raising questions if his improbable return to the Masters would only last two days.

And now he has two more. 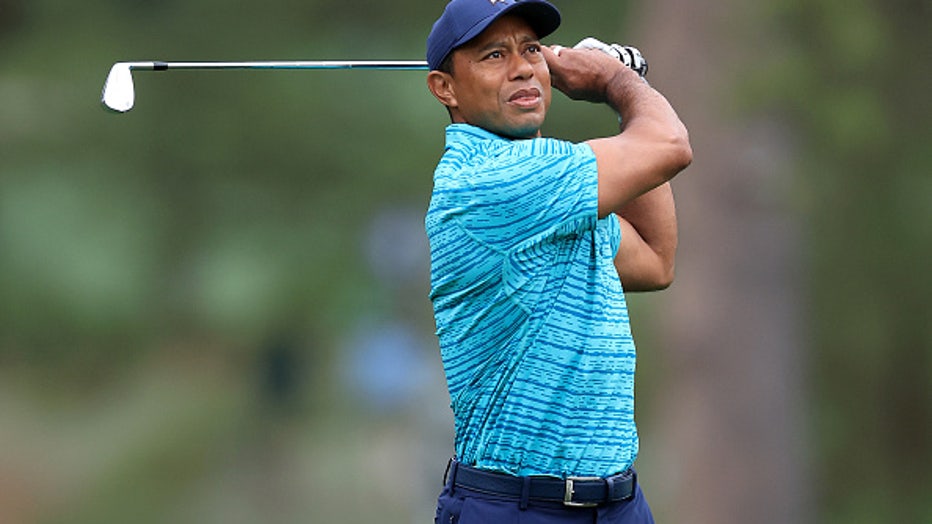 AUGUSTA, GEORGIA - APRIL 08: Tiger Woods follows his shot on the 17th hole during the second round of The Masters at Augusta National Golf Club on April 08, 2022 in Augusta, Georgia. (Photo by David Cannon/Getty Images)

RELATED: Tiger Woods plans to play in The Masters 'as of right now'

Coming off consecutive bogeys at the start of Amen Corner, he was headed for more trouble on the par-5 13th except that he missed badly enough to stay on right side of the tributary of Rae’s Creek, setting up a pitch-and-putt for birdie.

"It was tough for everybody," Woods said, and before long came a wry smile. "Obviously, there’s a few people who aren’t struggling out there."

One of those would be Scheffler, who has everyone’s attention.

Another was Thomas, with whom Woods played his practice rounds last week and in the days leading up to the Masters. He opened with a 76 and spent the rest of the day sulking at what looked to be a lost opportunity.

He capped off his 67 with three straight birdies along the back nine.

"I very easily could be going home right now, and not only am I not, but I’m in a really good spot going into this weekend," Thomas said.

He was seven behind, nonetheless, though he wasn’t the least bit surprised Scheffler was able to post such good rounds to build a big lead.

"If I played how I should yesterday, I should be right there with him," Thomas said. "This place, I love it because you can make so many birdies — even in conditions like this, if you plot your way around and know how to get it around, you can make a lot of birdies. It exposes you when it gets this windy if you don’t have control of your ball.

"He clearly has control of everything right now based off the last couple of months, so I’m not too surprised," he added. "But yeah, I would appreciate it if he would stop going too far away."