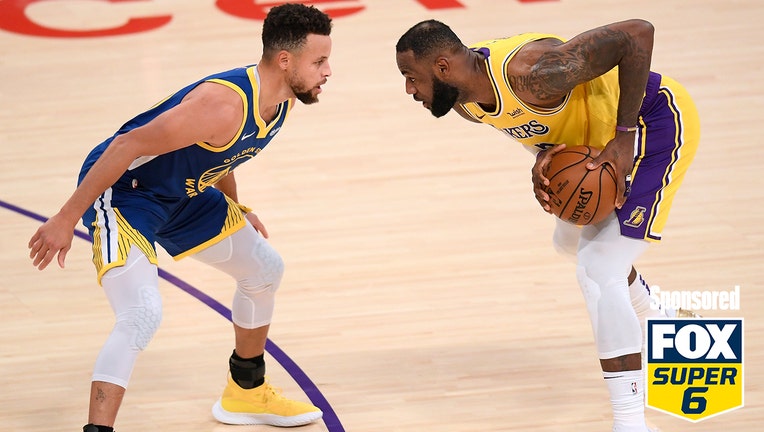 LeBron James of the Los Angeles Lakers is guarded by Stephen Curry of the Golden State Warriors during a game at the Staples Center on January 18, 2021 in Los Angeles, California. (Photo by Harry How/Getty Images)

Once upon a time, a matchup featuring LeBron James and Stephen Curry was reserved for a seven-game NBA Finals in June – not a potential three-game mini-tournament to get into the NBA playoffs.

Yet in this bizarre and injury-plagued year in the Western Conference, both LeBron's Los Angeles Lakers and Curry’s Golden State Warriors find themselves having to find a way to win in the NBA's play-in round – or face an early start on summer vacation.

And with FOX Super 6, you have the chance to get involved in the play-in game excitement yourself and win big. All you have to do is answer six questions correctly about Wednesday night’s game for your chance at $1,000, absolutely for free! Just download the free FOX Super 6 app on your phone or tablet and make your picks to play.

Here are the six questions for Wednesday night's game, and some quick thoughts on each.

After the first quarter, which team will be winning and by how much?

Neither team is exactly breaking the scoreboard during the first quarter this year. The Warriors are averaging 28.6 points per first quarter, good for 15th in the NBA’s overall rankings. The Lakers are slightly worse, ranking 21st in the league at 27.8.

Add it all up, and a slim Warriors lead feels right.

Will Draymond Green get a technical foul in the game?

The options: Yes, no

The Warriors' passionate heart and soul, Green has 14 technicals this season – tied for third-most in the league with Russell Westbrook of the Washington Wizards. (Luka Doncic has 15 for second, while the Philadelphia 76ers' Dwight Howard has 17.)

Green obviously has a history with James dating back to the 2016 Finals, in which he was suspended for an incident involving James. Still, he has to know that Golden State can’t afford him off the court tonight.

How many dunks will LeBron James have during the game?

Well, let’s see how LeBron’s ankle is. After missing a ton of time with a high-ankle sprain then seeming to aggravate the injury in Sunday’s season finale against New Orleans, James might not be trying to elevate too much in order to preserve himself for a long road.

How many 3-pointers will Steph Curry make during the game?

In three games against the Lakers this year, Curry had nine 3-pointers – his lowest mark against a Western Conference team against which he played all three games. Part of that could be the Lakers' defensive style, which takes away Curry’s touches. But it also could be a simple matter of bad nights.

Who will be the top scorer in the game?

The fashionable thing would be to say Curry since the Warriors need a huge night from him to move on.

However, Davis could be the sneaky right answer here. There’s not a good matchup defensively from Golden State for Davis, and with James still potentially hindered by an ankle, it might be up to the Brow to carry more of the offensive load.

Which team will win and by how much?

All season long, Los Angeles has been dealt with the aftermath of a long grind through last year’s playoffs and a condensed schedule. The one thing that everyone said, however, was to wait until the postseason, when the Lakers would flip the switch.

So this could be message-sending time for the Lakers, who are still deeper and still better than Golden State even with their recent issues. They were 2-1 against the Warriors this year and outscored them by 18.3 on average in those games.