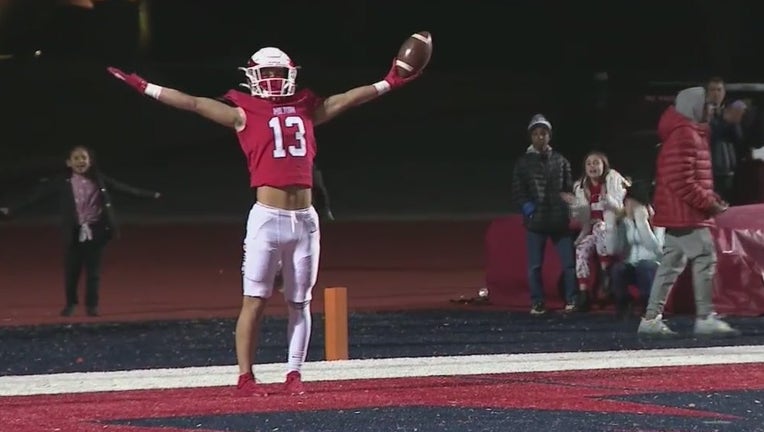 Milton scores during a win over Mill Creek in the GHSA Class AAAAAAA quarterfinals.  (FOX 5 Atlanta)

Across the state, 32 teams are a win from playing for a state title.

HIGH 5 Sports brought you some of the quarterfinals rounds' top highlights and looks ahead at each of the classifications brackets:

Class 6A Quarterfinals: Westlake vs. Carrollton

The Carrolton Trojans advanced to the Class 6A semifinals. Carrollton scored late to beat Westlake.

Hughes dominated Northside, capitalizing on a fumble returned deep into the red zone. Hughes advances to the semifinals.

Dacula will host Hughes in one semifinal matchup. Buford will host Carrollton on the other side of the bracket.

Carver led 46-14 in the fourth quarter after a back-and-forth first half.

Cedar Grove will host Appling County in one semifinal matchup. The winner of Carver and Burke County will head to Pierce County.

South Atlanta led at halftime. A tremendous defensive effort by Callaway sparked a comeback and win to advance to the semifinals.

The top two teams in Class AA faced off in the quarterfinals. Thomasville led by multiple scores late in the third quarter.

Swainsboro will host Fitzgerald in one semifinal matchup. The winner of Rabun County and Thomasville will host Callaway on the other side of the bracket.

Milton ran and passed for long touchdowns and rolled past Mill Creek.

Walton led early and went up by three scores late in the first half.

Roswell hosted the defending state champions. Roswell fell behind and fought back but couldn't get closer than seven points.

Collins Hill hosts Grayson in a rematch of last year's state championship. Milton will host Walton on the opposite side of the bracket

Creekside was just short of a touchdown on a late fourth-down conversion, but scored later. Creekside survived and advanced.

Creekside hosts Warner Robins. The victorious team will play the winner of Blessed Trinity vs. Calhoun.

A kickoff return for Bainbridge wasn't enough to earn a win against North Oconee.

Cedartown will head to Carver-Columbus. North Oconee will play at Benedictine.

Trinity Christian cruised to a win, scoring early on an 89-yard screen pass.

Irwin County is set to host Wilcox County. Metter will host Brooks County for a chance to play in the state championship.