ATLANTA - While the NBA playoffs continue without the Hawks and as the NFL ramps up towards Week 1 in a few weeks, Hawks guard Kevin Huerter is at home in Atlanta, thinking about fantasy football.

He's always been a big fantasy football fan, playing with his friends from high school and family members, but this year, he's doing it for charity. Huerter will host the Huerter Conference league that fans can join through the Malcolm Brogdon Family Foundation, benefitting Hoops4Humanity, which provides clean water in Africa.

"I’ll be in the league with them, I’ll be competing against them. And again, it’s a great way to raise money and have fun and play fantasy football," Huerter told FOX 5 Sports.

Fans will have the chance to draft their own teams to compete directly against Huerter and other NBA stars like Atlanta native Malcolm Brogdon of the Pacers, Joe Harris of the Nets and George Hill of the Bucks. The league's private draft event will be held Sept. 1 via Zoom at 7 p.m.

Registration costs for the 13-week, head-to-head format NFL season support the cause of clean water in Africa, which is an even more critical need with COVID-19 raging.

Huerter said he has won leagues he's been a part of in the past before.

"I have really good years," Huerter said. "I’m never in the middle of the pack. I’m either really bad or really good. So I guess I've got to get more consistent."

But just because this league is for a good cause, doesn’t mean Huerter isn’t strategizing to win it all. And one of his go-to draft picks is a player Atlanta sports fans are pretty familar with.

"I’ve had Todd Gurley, who obviously is now with the Falcons, so I’ve had him the last couple years," Huerter said. "I’m a big Giants fan even though I root for the Falcons now, so I had Saquon Barkley last year. But yeah, really RB’s and WR’s are the type of people I go after."

While the NFL hopes its season goes off without a hitch outside of a bubble environment, the NBA's resumed season continues in the Orlando bubble.

As the playoffs continue, Huerter and the Hawks haven’t been able to do much but watch.

"I think a lot of people didn’t really know what to expect going into it, how the bubble was going to work, how the games would be, how it would exist without fans, but I think the NBA has done a great job putting it on," he said. "And the fact that there are no (positive) tests that have come out of it, nobody’s getting sick, the games have been able to go on and we’re almost through the first round of the playoffs, really can’t ask for much more. And as a player and also as a fan always watching the games, you just want to see sports, so the fact that the can put this on and a lot of people are making different sacrifices, but at the end of the day, we’re still getting NBA basketball." 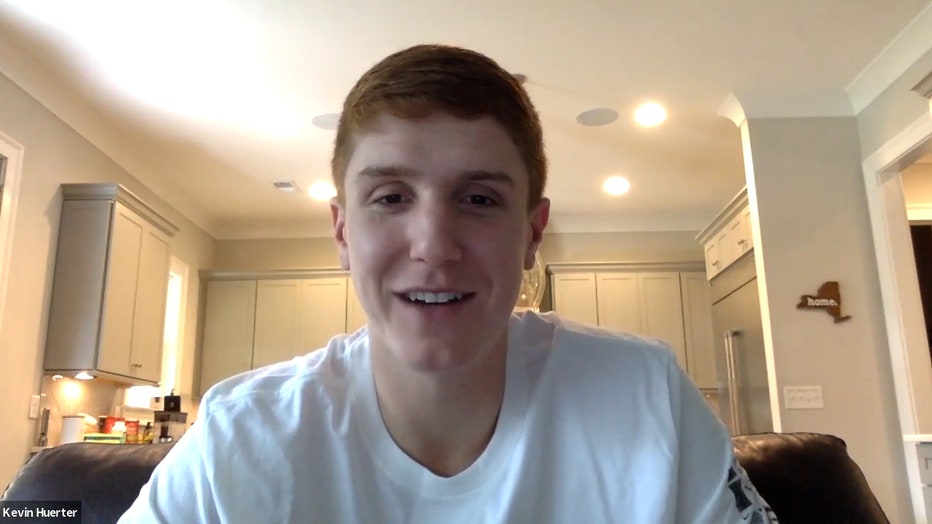 Left out of the season's resumption, the Hawks haven’t hit the court together since play stopped in mid-March, with just limited individual workouts permitted at the team facility.

Last week, the NBA rolled out a two-phase plan for the Hawks and the seven other teams that didn’t qualify for the season restart in Orlando, beginning with voluntary individual workouts Sept. 14-20, with daily COVID-19 tests.

"To be honest, it was a little bit surprising just because for the longest time we didn’t think we’d get anything," Huerter said. "A lot of our owners and front office and players have been pushing to get something going, so at this point in the offseason, we honestly didn’t expect anything to come out of it, so the fact that we get something and can get everybody in the gym at the same time, is definitely going to be really beneficial."

Phase 2 will be after that, until Oct. 6, when teams must facilitate a "campus-like environment," a bubble-type setting that Huerter is in favor of.

"The bubble works," he said. "I know safety is a big priority especially among players figuring out ways to stay safe and keep your family safe, so we’ve seen the bubble work for hundreds of people, so we think we can make it work for less than 50 people for our team."

Huerter says the opportunity to continue working together is huge for the Hawks young squad.

"Any time you’re getting young guys playing NBA games playing against NBA competition, it’s another opportunity to get better, and unfortunately we missed out on that opportunity, so we kind of got to generate it ourselves," he said.