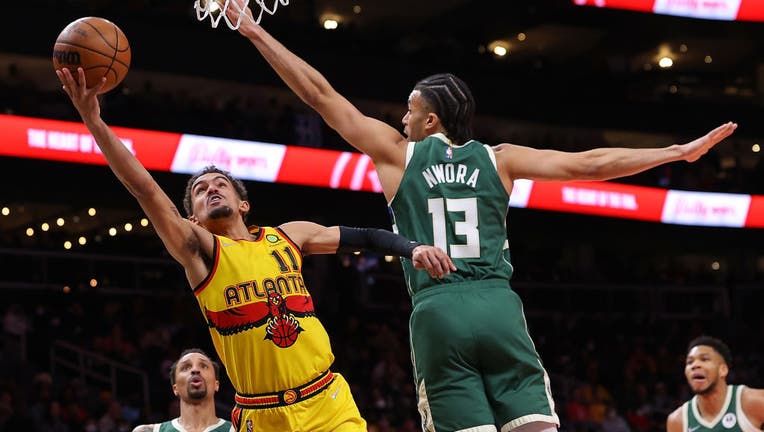 ATLANTA, GEORGIA - JANUARY 17: Trae Young #11 of the Atlanta Hawks attacks the basket against Jordan Nwora #13 of the Milwaukee Bucks during the first half at State Farm Arena on January 17, 2022 in Atlanta, Georgia. NOTE TO USER: User expressly ackn (Getty Images)

ATLANTA - Trae Young scored 30 points for the struggling Atlanta Hawks, who trailed for much of the game before rallying for a 121-114 victory over the Milwaukee Bucks on Monday night, snapping a 10-game home losing streak.

Winning at State Farm Arena for the first time since Nov. 22, the Hawks avoided their longest stretch without a home victory since an 11-game skid near the end of the dismal 2004-05 season, when Atlanta finished 13-69.

Khris Middleton scored 34 points and Giannis Antetokounmpo had 27 for the Bucks.

The Hawks appeared headed for another home loss in the traditional game in Martin Luther King Jr.’s hometown on the national holiday honoring the civil rights leader, trailing by as many as 14 and finding themselves down 97-86 with about 9 minutes remaining.