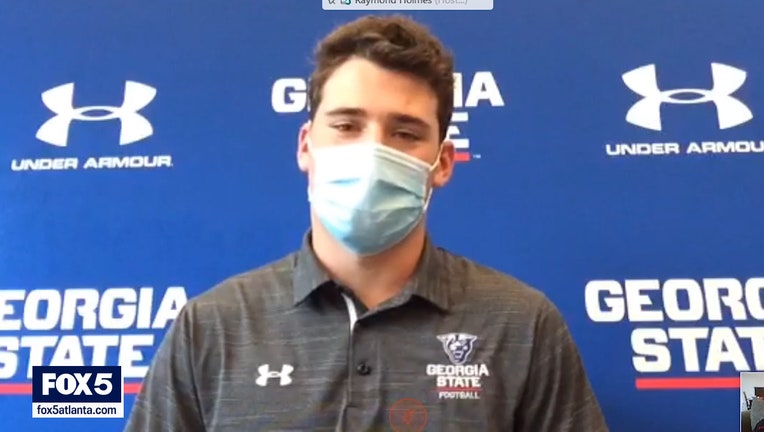 ATLANTA - Georgia State quarterback Mikele Colasurdo is staying optimistic, despite having to miss this season because of a heart-related condition caused by COVID-19.

The freshman from South Carolina revealed last Thursday on social media that he would not be able to play for the Panthers this year. He said doctors had found a condition in his heart that could be made worse by strenuous exercise. Colasurdo spoke with the media on Tuesday, and wanted to encourage people to take COVID-19 seriously and not end up in the situation he's dealing with.

"That was kind of why I wanted to talk about this today," said Colasurdo. "A lot of people have heard, 'yeah, this can happen.' To put a face with a story, it makes it more real."

Colasurdo says he tested positive for COVID-19 and experienced symptoms while the Panthers were doing offseason workouts. After testing negative, he returned to campus, where GSU trainers sent him to have his heart checked out. There have been growing concerns that COVID-19 could lead to conditions like myocarditis, which is inflammation in the heart. That condition can lead to more serious problems if a person does strenuous exercise.

Colasurdo does not know his exact diagnosis yet, and will be getting an MRI soon to find out more. He says the cardiologist he has seen told him he can't do any significant workouts for 2-3 months, though Colasurdo has been told his heart condition is relatively mild. Doctors told Colasurdo his condition should be short-term and resolve itself with time.

"Especially me being a 19-year-old athlete, a healthier person," said Colasurdo. "I'm not someone who had a pre-existing condition or anything like that. Just so everyone realizes, you're not immune from this. This can happen to you, too."

Colasurdo said several times that, while it's an unfortunate situation, he feels safer on Georgia State's campus and around the team than he would at home. He credits team medical staff with directing him to the specialists who were able to detect the problem with his heart.

"The whole reason I was diagnosed with this was because I was here," said Colasurdo.

Ultimately, Colasurdo says his current situation started to feel more real as he got to see his teammates back out on the practice field this week in person. He hopes that sharing his story can lower the chances other athletes might find themselves in the same situation.

"What I would say to those people is, the reason I got COVID in the first place was me being selfish and seeing people outside the football facility, without a mask," said Colasurdo. "I wasn't doing my part. I learned my lesson the hard way. I don't want anybody else to go through this."