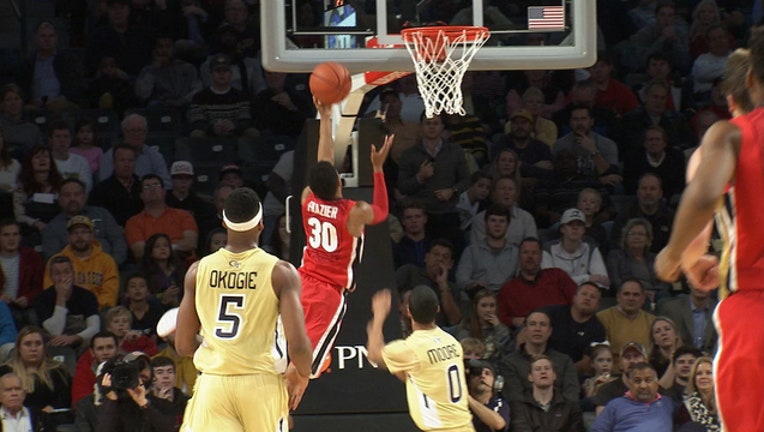 Frazier scored 29 points, including two free throws with 1.6 seconds remaining that lifted Georgia to an 82-80 win over Louisiana State on Saturday night, giving the Tigers their school-record 15th consecutive loss.

Coach Mark Fox revealed after the game Frazier woke up with flu-like symptoms but tested negative for the flu when taken by a team trainer to the hospital. He still played 36 minutes while scoring at least 28 points for the fourth time in the last five games.

Even while sick, Frazier was Georgia's best option when it trailed 80-79 with 6.7 seconds remaining.

Juwan Parker said Georgia's plan for the crucial play was simple: "Get J.J. the ball and let him make the play."

Frazier dribbled the ball up the court and was fouled by Duop Reath on a layup, setting up the tying and go-ahead free throws.

LSU coach Johnny Jones said he thought Reath "did a good job of staying tall" on the play.

"I hate to see games like that, especially after kids have played as hard as they played, come down to calls like that at the end," Jones said.

Georgia's Derek Ogbeide, who had 12 points, added a free throw for the final margin.

Georgia (17-12, 8-8 Southeastern Conference) led by 17 points in the first half. The Bulldogs have won four of five in their attempt to make a late-season run for NCAA tournament consideration.

LSU worked the clock before missing three shots. A review confirmed an LSU player deflected the last miss out of bounds, leaving Georgia possession with 6.7 seconds.

"I thought our guys did a tremendous job after being down by 17 in the first half," Jones said. "...I thought they played the best second half we've played in a long time this year."

LSU fell short of its first win since beating Missouri in its SEC opener on Jan. 4.

Wayde Sims' tip-in with 1:25 remaining gave the Tigers a 78-77 lead, their first lead since early in the game. Following a miss by Frazier, Blakeney's short jumper pushed the lead to three points.

Georgia: Former coach Hugh Durham was honored at halftime for his induction last November into the National Collegiate Basketball Hall of Fame. Durham, 79, was 297-215 as Georgia's coach from 1978-95. He also coached at Florida State and Miami and took Georgia and Florida State to their first Final Fours. ... G Jordan Harris, a freshman and part-time starter, missed his third straight game with an undisclosed injury.

Georgia had little time to recover from an important 60-55 win at Alabama on Thursday night.

Fox said "there's no question we wore down" in the second half.

Maten is off crutches but remains "nowhere close to playing," according to Fox. Maten wore a warmup suit while watching the game from the Georgia bench.

Former Southern University football player Devon Gales received a standing ovation at halftime in his return to Georgia, which became his second football home after he suffered a career-ending spinal injury in a game against the Bulldogs on Sept. 26, 2015. Georgia received the NCAA Sportsmanship Award in recognition of its first-response care and subsequent support for Gales. Georgia announced a campaign to raise $500,000 to build a home for Gales, who is still in a wheelchair.