ATLANTA - Major League Soccer is taking a page out of NASCAR's esports approach to a live sports-free landscape in the wake of COVID-19 -- with a charity twist.

MLS and FOX Sports announced Monday that a five-episode eMLS Tournament Special will kick off Sunday, April 19, on FS1 and FOX Deportes at 7 p.m. Each Sunday, MLS players and eMLS players from the same clubs will face off in single-elimination EA SPORTS FIFA 20 tournaments.

MLS WORKS, the league's social responsibility platform, and FOX Sports will make a donation on behalf of the winning club to Feeding America, with MLS also supporting Food Banks Canada. 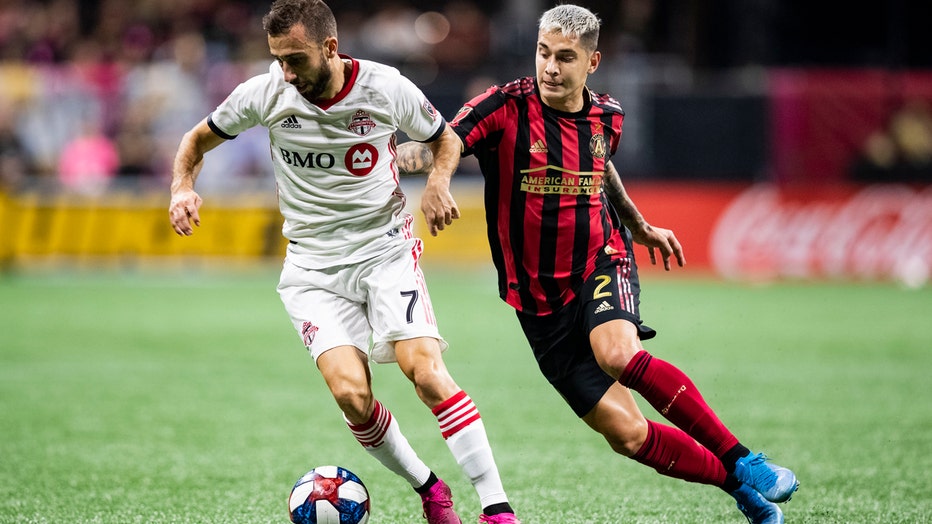 Nicolas Benezet #7 of Toronto FC controls the ball in front of Franco Escobar #2 of Atlanta United during the first half of the Eastern Conference Finals between Atlanta United and Toronto FC at Mercedes-Benz Stadium on October 30, 2019 in Atlanta, G (Carmen Mandato/Getty Images / Getty Images)

"The eMLS Tournament Special represents the spirit of MLS Unites by entertaining fans and giving back to our communities," Camilo Durana, MLS SVP of Properties and Events said in a statement. "We’re thrilled many of the league’s top players are joining our eMLS participants to compete and also provide benefit for those on the front lines. We are also thankful to FOX Sports and all of our partners for their collaboration on the innovative series that will be both fun to watch and make a difference."

Week 1 features Chicago Fire against FC Cincinnati before the digital version of 'El Trafico' between LA Galaxy and LAFC.

Here is the full competition slate:

"We are thrilled to partner with MLS on this innovative project, which will entertain viewers during this difficult time while also helping to support COVID 19 relief efforts," Joe Franzetta, FOX Sports VP, Rights & Business Relationships, said in a statement. "With the perfect combination of the talented team hosting the event and the fan-favorite MLS and eMLS players, it will be exciting to watch this series come to life."