ELBERT COUNTY - Chiefs rookie receiver and return specialist Mecole Hardman does everything with his full energy. That includes his fast-paced play on the field, his often creative pregame clothing, and in his commitment to giving back.

"I'm just so glad and so proud of him that he stayed Mecole," said Chrystal Thomas.

Thomas is the faculty sponsor for Friends Helping Friends in Elbert County Schools. That's an organization dedicated to helping the area's special needs students. One way they do that is by pairing their students with other students throughout the school. They do activities together, go on trips and more. One of the founding members of the club: a then-middle schooler Mecole Hardman.

"He would hold the kids, some of the kids that were wheelchair-bound and nonverbal," said Thomas. "Rock them in the rocking chair. He always made time for them, no matter what."

The impact the students he worked with had on Hardman were immediate, so much so that his family remembers hearing about it.

"I remember him coming home in the 6th or 7th grade, talking about the kids," said Mecole Hardman, Sr. "Like, 'daddy, these kids are special. I want to be around them more and more.'"

Before playing in the NFL, and before playing in college at the University of Georgia, Hardman was the star quarterback at Elbert County High School. Football is a big deal in this tight-knit town, and Hardman was extremely well known for his talent, which led to scholarship offers from around the country. Having him, seen as such a leader in his school, spend time with special needs kids had a ripple effect that's still being felt today. 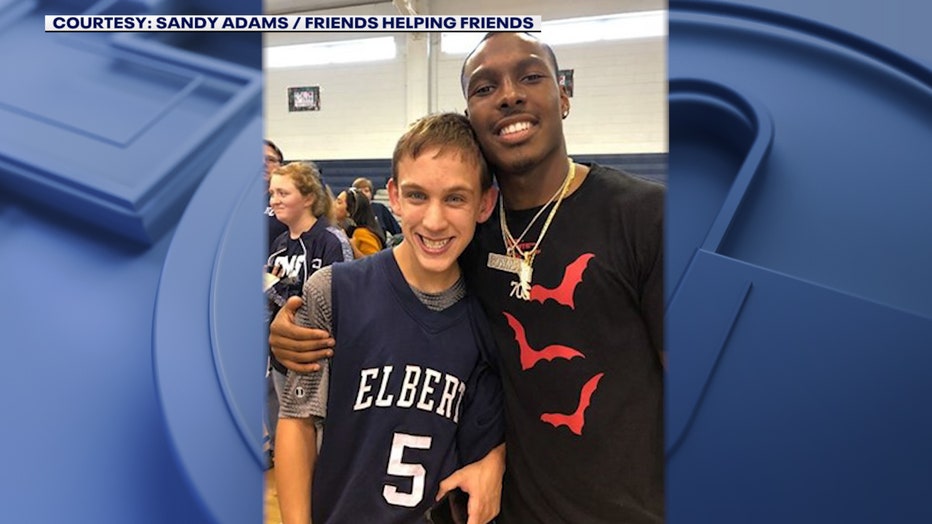 "I really think our kids are rockstars in Elbert County because people like Mecole have set the example," said Friends Helping Friends founder and president Sandy Adams. The club, she said, since became a 501(c)(3), expanding its reach into surrounding communities.

After leaving to play college football in Athens, Hardman continued showing up whenever he could to spend time with the kids. That's gone on through his debut in the NFL; most notably, after his Kansas City Chiefs played a Thursday Night Football game at the Denver Broncos. The next day, at Elbert County Middle School, was the annual basketball game fundraiser, where students play against the teachers.

Added Thomas, "And that was his idea!"

Hardman's father speaks with pride about his son's charitable spirit; but adds that the experience had just as much of an impact on Mecole himself.

"I think when he sees those kids laughing and smiling, loving on him ... not even knowing he's Mecole, the football superstar," said Mecole Hardman, Sr. "Just truly loving him ... I think that's changed his life, in how hard he wants to work, and how he wants to give back to them."

Hardman recently surprised Friends Helping Friends with an unexpected $15,000 donation. He also has signed plenty of donated gear to help raise money for the club, and spends as much time as needed taking pictures and signing autographs whenever he's back in town.

"That's huge, because that tells you our kids made an impact on him," said Thomas. "It makes me smile, because our kids love him so much. When he walks in the door, the whole world stops."

What everyone seems most proud of, however, is Hardman's most recent request. He asked the Friends Helping Friends organizers for documents and forms they use within the group. That's because he's planning to start his own organization to help special needs students in Kansas City, based off the club back home that he's helped so much.