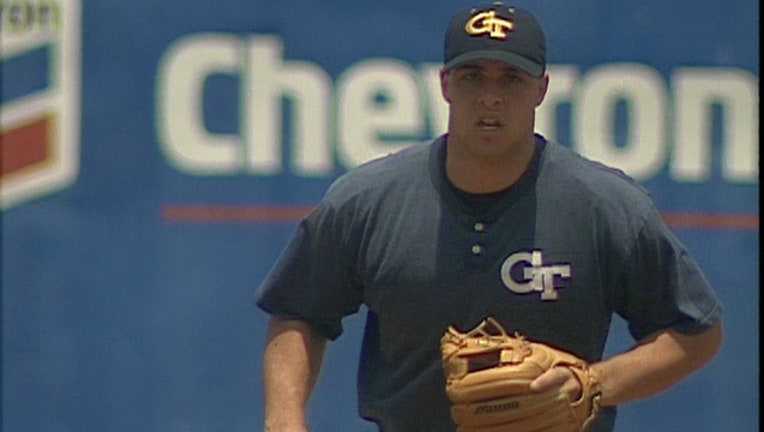 NEW YORK (AP) - Mark Teixeira knew this would be difficult. Twenty seconds after he started to speak, his voice cracked.

A three-time All-Star first baseman whose career has been interrupted by injuries for much of the last five years, Teixeira announced during a tear-filled news conference Friday at Yankee Stadium that he plans to retire at the end of this season.

"I gave you everything I had," he said to Yankees fans during the televised announcement, then stopping for 15 seconds to regain his composure. "It wasn't always enough."

A five-time Gold Glove winner, he is in the final season of a $180 million, eight-year contract. He is most proud of reaching 30 homers and 100 RBIs in eight consecutive seasons from 2004-11.

"As the season went on, I just kind realized that my body can't do it anymore," Teixeira said as teammates looked on. "If I'm going to grind through seasons not being healthy, I'd rather be home with my family. I'd rather do something else. And I miss my kids way too much to be in a training room in Detroit rather than being at their dance recital or their school play."

When he arrived at spring training in February, Teixeira said "I'd love to play five more years. My body feels so good. Why not play until 40?"

"My neck hurts almost every day. The knee thing popped up," he said. "It's been a struggle for me to stay on the field consistently the last three, four years now. And so it just all kind of dawned on me that that's not in the cards."

He was slowed early this season by a bulging disk in his neck and was on the disabled list from June 4-25 with a right knee cartilage tear, an injury that has caused manager Joe Girardi to schedule repeated off days since his return.

Teixeira first thought about retiring after he spoke to his father in San Diego at the time of his 400th home run on July 3. He finalized his decision when talking with his family during the All-Star break.

He didn't want to hide his decision when asked in the next two months about possible trades by the rebuilding Yankees or impending free agency. He anticipated breaking down as he spoke about the end of his career.

"Teixeiras are criers by the way, so if you don't know that yet," he said.

He was taken by Texas with the fifth overall pick in the 2001 amateur draft, made his big league debut with the Rangers two years later and, hoping to emulate Baltimore's Cal Ripken Jr., played in 507 consecutive games during a streak that ended in 2007. He was traded to Atlanta that July, dealt to the Los Angeles Angels the following year and signed with the Yankees in January 2009.

"I was like, oh, Yankees win the World Series all the time. We'll probably win three or four more," he thought to himself. "But you realize how difficult it is."

Teixeira was limited to 15 games and a .151 average in 2013 after tearing the tendon sheath in his right hand while with the U.S. team at the World Baseball Classic. He had surgery that July 1 and missed the remainder of the season, then hit .216 with 22 homers and 62 RBIs the following year, when the hand was still regaining strength and he was slowed by a hamstring injury.

Fully recovered, he made the All-Star team again in 2015 but fouled a pitch off his right leg Aug. 17, played two more games in pain and then found out he had fractured his shin. He finished the season with a .255 average, 31 homers and 79 RBIs.

Greg Bird, a 23-year-old who missed this season following shoulder surgery, is expected back for the Arizona Fall League and is projected by the Yankees as Teixeira's possible successor. Girardi anticipates Tyler Austin, who turns 24 next month, also can challenge for the job during spring training.

Teixeira hosted a show on the Yankees' YES Network two years ago called "Four Territory." He doesn't want to think about future jobs just yet.

"I'll miss hitting the home run," he said. "I won't miss the early workouts in spring training. I won't miss leaving my family. I won't miss being on the training table getting treatment. I'm not going to miss any of that stuff. But, yeah, from 7 to 10 o'clock, I'll miss that time. But that will fade eventually."