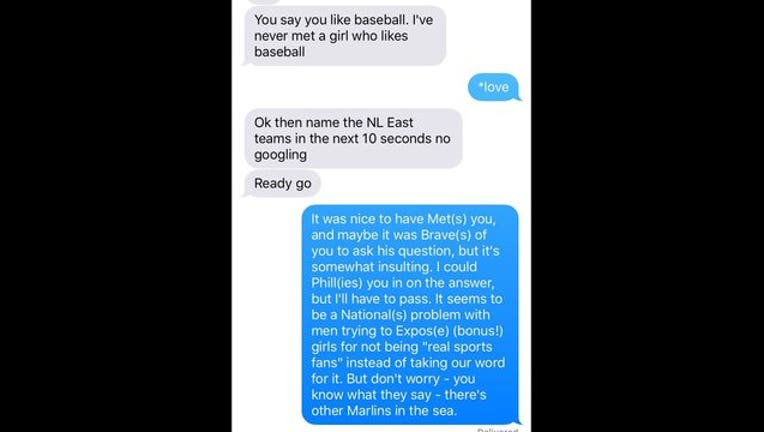 CHICAGO (FOX 32 News) - Milwaukee Brewers fan Megan Brown is one of the biggest baseball fans in the country. But when a potential date didn’t believe that she actually was, Megan responded in the best way possible and – pun intended – knocked it out of the park.

The potential date questioned Megan’s knowledge and asked her to name all the National League East teams within 10 seconds. So, she then responded with a hilarious pun-filled text while at the same time letting him know they wouldn’t be seeing each other again.

"It was nice to have Met(s) you, and maybe it was Brave(s) of you to ask (this) question, but it’s somewhat insulting. I could Phil(ies) you in on the answer, but I’ll have to pass. It seems to be a National(s) problem with men trying to Expos(e) (bonus!) girls for not being "real sports fans" instead of taking our word for it. But don’t worry — you know what they say — there's other Marlins in the sea."