ATLANTA - For many couples, coronavirus means more time together than ever before. One Atlanta Falcons player and his wife are staying connected with each other, and with their fans, in a new way.

"Quarantine, it's kind of normal life for us," said Atlanta safety Ricardo Allen.

Ricardo and his wife Grace are both "people-people" -- Ricardo known as an outspoken leader on the Falcons defense, and Grace, who has a big following on social media. That led them to a new project, which they've been thinking about for a while. 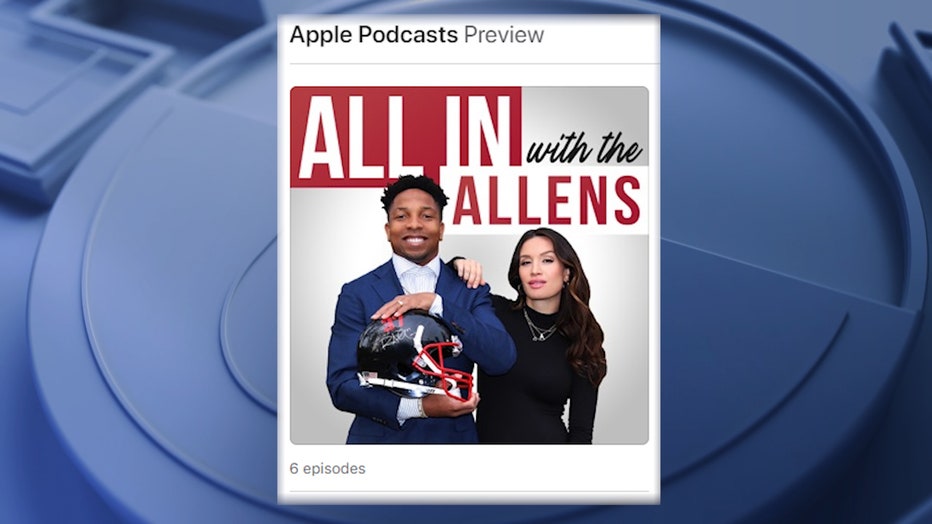 Falcons safety Ricardo Allen and his wife Grace launched a podcast, called "All in with the Allens"

Grace and her husband started their own podcast earlier in April, titled "All In with the Allens." While fans might tune in expecting football, they're going to hear much more about family. In fact, "Family" is the main category the show is listed under with podcast apps.

While the plan has been to launch the podcast in April to mark the couple's fifth wedding anniversary, COVID-19 certainly has been a factor. They've talked about keeping their kids occupied while locked down, touched on popular streaming TV shows like Netflix' "Tiger King;" but also more serious topics. That includes Grace talking about being pregnant with the couple's third child, and how the experience is different because of coronavirus. She is due in May.

"Right now I'm talking a lot about pregnancy, but in another month I'll be talking about sleepless nights and sleep training," said Grace.

There has been some football talk, including the story of Ricardo's unlikely rise to become a mainstay on the Falcons defense. Ultimately, the Allens say the conversations are similar to what they talk about every day, but now it's shared with the world.

"To be able to even have people enjoy the content and share it and give it love ... I didn't think it was going to do it," said Allen. "I thought people would think it's us being corny."

COVID-19 has given the Allens more time to think about the podcast, but it has added challenges. They bought recording equipment to ensure quality; but having kids at home all the time means less opportunity to record new episodes.

The couple says they've been overwhelmed by support.

"The response has been so much more than anything either of us expected," said Grace. "It's been really cool to get the support and hear the feedback. To us, it's normal ... It's just our life."

You can find the podcast on Apple Podcasts, Google Podcasts and Spotify. You can find a list of episodes on their Apple podcast page at this link: "All In with the Allens."

Right now, episodes come out every Monday. There is a plan for Ricardo to record solo mini-episodes tying in football and other topics into a common theme. Those would come out on Wednesdays.